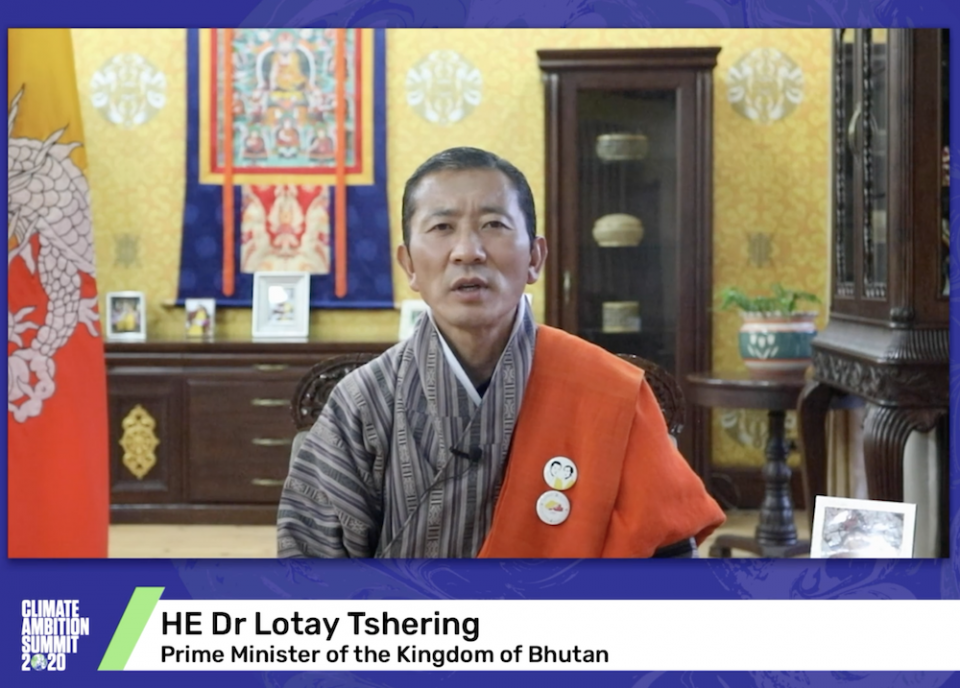 Dr. Lotay Tshering, prime minister of the Kingdom of Bhutan shares a recorded message for the Dec. 12 Climate Ambition Summit hosted virtually by the United Nations. He said that "we are all interdependent" but that climate change and COVID-19 affect poorer countries more. He mentioned Bhutan's constitutional requirement to keep 60% of the country under forest cover and talked about work to convert hydropower to solar and other sources and to replace vehicles with electric-powered ones. (NCR screenshot)

Commitments made by countries at a virtual climate summit on Dec. 12 are a step forward, but still not enough to slow global warming sufficiently, leaders of Catholic and other faith-based climate groups say.

"It's important to keep some momentum going, " said Daniel Misleh, founding executive director of Catholic Climate Covenant. "But clearly there need to be many more robust commitments to keep us to a 1.5-degree Celsius rise in temperature."

"Though the announcements … from countries across the globe had in common an almost unanimous pledge to reach net zero by 2050, which is good, there hasn't been enough clarity and commitment on how each country and the global community will start working now on the 2050 target," she told EarthBeat in an email after the Dec. 12 Climate Ambition Summit hosted by the United Nations.

The virtual summit, held on the fifth anniversary of the signing of the landmark 2015 Paris Agreement on climate change, stood in for COP 26, the annual U.N. conference that was scheduled to be held in Glasgow, Scotland, but was postponed until November 2021 because of the coronavirus pandemic.

The Paris Agreement calls for countries to reassess their greenhouse gas emission-reduction commitments every five years, with an eye toward making them more ambitious, to keep the average global temperature from rising by no more than 1.5 degrees Celsius from pre-industrial levels.

The one-day virtual summit featured brief, recorded messages from more than 75 heads of state, including Pope Francis, who committed the Vatican city-state to net-zero greenhouse gas emissions by 2050 through increased energy efficiency and other means. Representatives of corporations and nongovernmental groups also spoke.

Countries had been expected to present stepped-up emission-reduction proposals at COP 26 this year. When it was postponed, however, governments were invited to present recorded messages at the virtual summit based on summaries of what they planned to propose.

You can watch the various speeches here. (Many are in English; some are translated from original languages to English.)

Those that did not make the cut included Australia, a major coal exporter, and Brazil, a tropical country with a high deforestation rate, which has said it will set a more ambitious goal if it can raise $10 billion a year from other countries.

"The idea that there's an extremely powerful [political] party and government anywhere that identifies itself as being Christian, or any kind of religion, and in the same breath takes steps backwards on climate change in this way is stunning in its lack of faithfulness," he added.

In his opening remarks at the one-day virtual summit, U.N. Secretary-General António Guterres noted that even with commitments made so far, the world is still heading toward a potentially devastating 3 C temperature increase. Country pledges to the Green Climate Fund, which is meant to help the most vulnerable countries mitigate and adapt to climate change, have also fallen far short of the goal of $100 billion a year by this year.

Guterres said 38 countries have declared climate emergencies, which require them to step up efforts to address climate change, and called for all nations to do so. He also urged the world leaders to shift to a low-emission economy in their plans for recovery from the COVID-19 pandemic.

"How governments choose to spend their money in the recovery will define the future decade – it must be done with love and respect for future generations," said Turkson, who warned a few days earlier that the world is "not doing well" on climate change.

Questioning why the wealthiest countries are dedicating more economic recovery funds to greenhouse gas-producing fossil fuels than to renewable energy, he added, "Governments must stop investments in fossil fuels. Poor communities need sustainable modern green energy; they do not want to be trapped in the past as has happened so often previously."

In a statement just before the virtual summit, Bill O'Keefe, executive vice president for mission, mobilization and advocacy at Catholic Relief Services, said the coronavirus pandemic has shown that countries can respond quickly to emergencies when they choose to do so.

"While the pandemic is a human tragedy, it has already taught us a few lessons: the importance of early action, and that societal shifts can save lives," O'Keefe wrote. "On climate change, we must act faster and more efficiently if we want to see meaningful change during our lifetime."

One day before the virtual summit, the European Union countries agreed to reduce emissions by 55% from 1990 levels by 2030, a more ambitious target than the 40% on which they had failed to agree in October.

In reaching the deal, Western European leaders had to overcome resistance from coal-dependent Eastern European countries. The budget on which they agreed includes funds to help those nations shift to renewable energy.

At the virtual event, Pakistan pledged to stop building coal-fired power plants, but Prime Minister Imran Khan said the country would continue to use coal as fuel by converting it to liquid or gas. India, the world's third-largest energy consumer after the U.S. and China, committed to increase its use of renewable energy, but critics noted that Prime Minister Narendra Modi did not mention coal, which produces more than half the country's electricity. 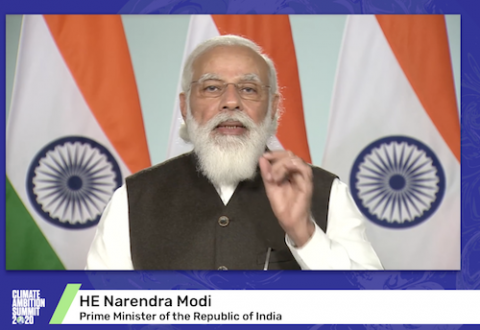 The U.S., which formally withdrew from the Paris Agreement in November, did not participate in the virtual summit. But President-elect Joe Biden has said the U.S. will host a climate summit of the world's major economies early next year. He has also pledged that on his first day in office in January, he will signal the country's intention to rejoin the Paris pact, a move that would take effect a month later.

Two U.S. governors — Gretchen Whitmer of Michigan and Charlie Baker of Massachusetts — did participate in the virtual summit, a reminder that state and local efforts to combat climate change have continued despite lack of federal leadership under the outgoing Trump administration. Nevertheless, a new study shows that many states that have set ambitious climate goals are not on track to achieve them.

"I think everybody is recognizing that if we can't turn this around by the end of the decade, it's going to be really hard to keep the climate feedback loops from running out of control," Misleh of Catholic Climate Covenant said.

Even if the global effort to achieve net-zero emissions — meaning that humans produce no more greenhouse gases than the planet's ecosystems can absorb — excess greenhouse gases will linger in the atmosphere.

For Misleh, that points to the need for a global effort at landscape restoration. "We need to support a lot more efforts to get trees planted around the world," he said.

Martinelli of CIDSE said countries must shift to greener economies in the wake of the coronavirus pandemic, stop supporting fossil fuels and help poor countries adapt to climate change, with compensation for climate-related losses and damage.

Harper of GreenFaith believes that a "much, much larger grassroots movement" is needed to pressure governments to change their policies by "showing that there's strong cultural and moral support" for action.

Energy generation and agriculture together account for half of the world's greenhouse gas emissions, and Harper called for "peaceful actions … guided by conscience" to oppose increased expansion of fossil fuel infrastructure, deforestation and industrial agriculture.