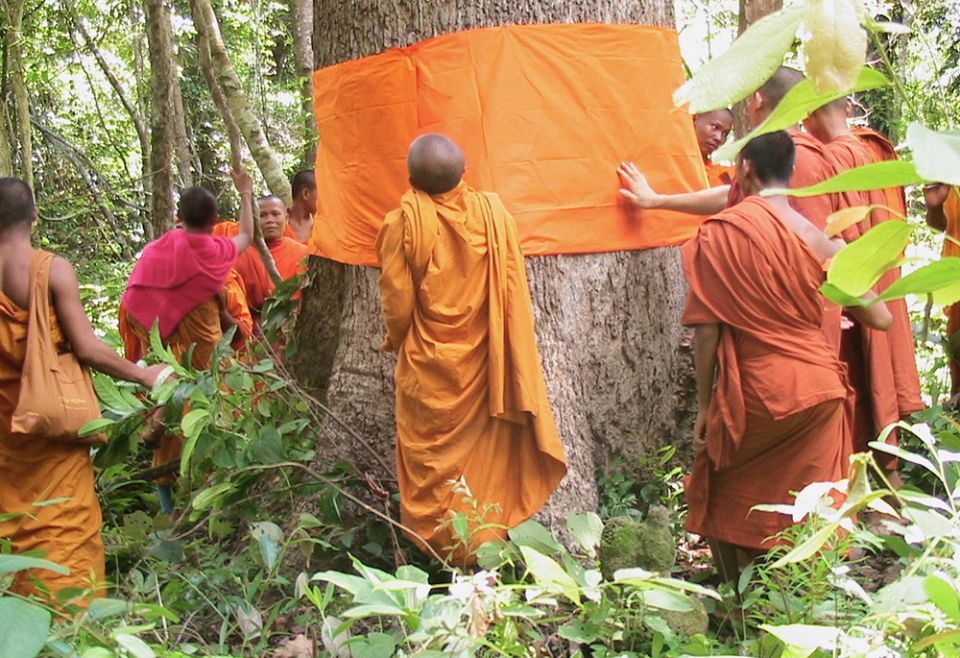 Buddhist monks in Cambodia 'ordain’ a tree, part of an award-winning conservation program to protect a community forest. (Courtesy of FaithInvest)

When leaders of the world's religions assembled at the Vatican in October, they sought to deliver a united message to the global community of the need for rapid, collective action to combat climate change.

But besides urging others to act, the joint faith appeal to the COP26 United Nations climate summit also included a pledge by the faith community to practice what they preach within their own houses of worship and institutions.

How some intend to do that was previewed in a separate but related announcement that same day, Oct. 4, with the official launch of Faith Plans, a new program that its creators say represents the largest and boldest environmental initiative to date by the global faith community. 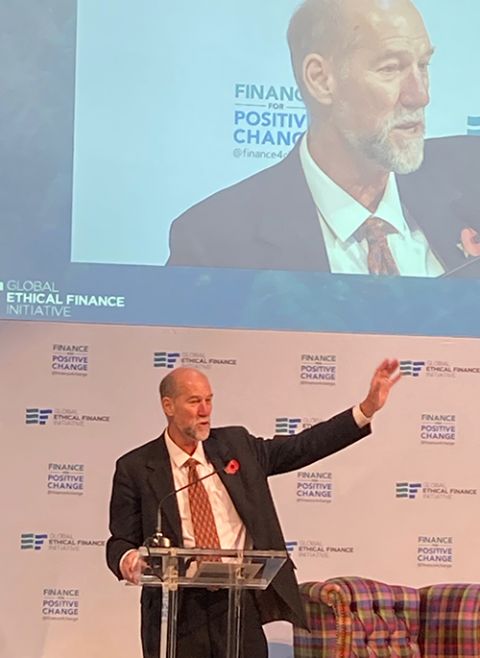 "Given the size of their assets and influence, faiths alone, through their actions, could make the crucial difference to the world's efforts to halt irreversible climate change and reverse environmental destruction," Martin Palmer, CEO of FaithInvest, the U.K.-based finance and environment organization behind Faith Plans, said in a statement.

The Faith Plans initiative is a project headed by FaithInvest and the beliefs and values program of the World Wildlife Foundation. Its more than two dozen partnering organizations have formed "an unprecedented coalition" of the global faith community to respond to the challenge of climate change, organizers say, and represent some of the largest and best-known religious actors in the climate arena.

"This is the first time a partnership of this scale and global scope has been brought together," Palmer said. "It is indicative of the urgency of the challenge we face."

The program looks to utilize the financial and property assets, resources and influence that faith groups possess as a more forceful tool in the global response to climate change and environmental degradation. Specifically, it asks for participating houses of worship to develop an action plan to be implemented over the next seven to 10 years.

That timeline aligns with a decade that scientists say is critical for slashing greenhouse gas emissions if the planet is to stay within the Paris Agreement goal of limiting global temperature rise to no more than 1.5 degrees Celsius. It also parallels the timeframe for the U.N. Sustainable Development Goals, many of which address environmental issues.

"It's not enough at this stage for faith communities that really care about the Earth to do a little bit," Lorna Gold, FaithInvest's director of movement building, who heads up the Faith Plans program, told EarthBeat.

"We've gone beyond the point of empty declarations or even well-intentioned declarations. We need concrete plans. We need action plans … and we need that action to be planned in a very coordinated way," she said. 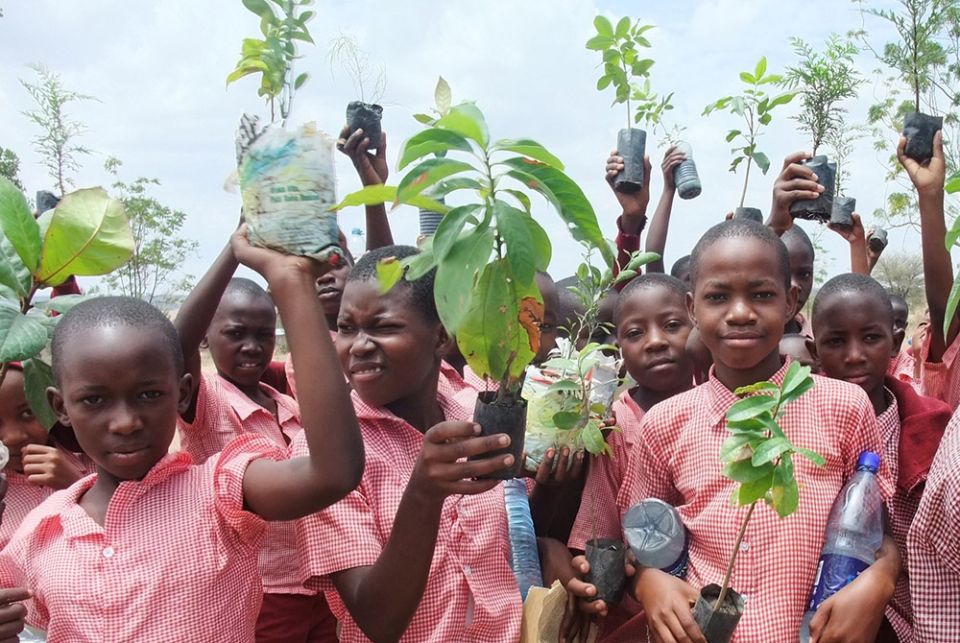 The first set of faith plans is set to be announced in June 2022, during the Stockholm +50 event marking 50 years since the 1972 U.N. Conference on the Human Environment, which is credited with making the environment a global issue. In the following years, individual plans will be published and implemented. Status check-ins will occur every three years to track progress and hold faith communities to their commitments.

The Faith Plans program outlines seven key areas where faith organizations can make long-term impacts for environmental good. A primary area is assets, through the many buildings, facilities and acreage that faith groups operate and manage.

Organizers of Faith Plans estimate that collectively the global faith community operates two-thirds of schools and a third of all medical facilities, and manages 8% of the world's land mass, including 5% of commercial forests. Faith groups also wield billions of dollars in financial holdings and investments.

Within those properties and portfolios lie potential for serious sustainable action, Gold said.

"Faiths are stakeholders in the future. It's not just about their role as advocates; it's about their role as the asset holders of a substantial amount of money. … It's about putting the assets of faith, as well as all the media and all the outreach, at the service of climate action and environmental action," she said.

The other key areas are education, wisdom, lifestyles, advocacy and outreach, partnerships and celebrations through traditional and new ways to celebrate nature and creation from a faith perspective. 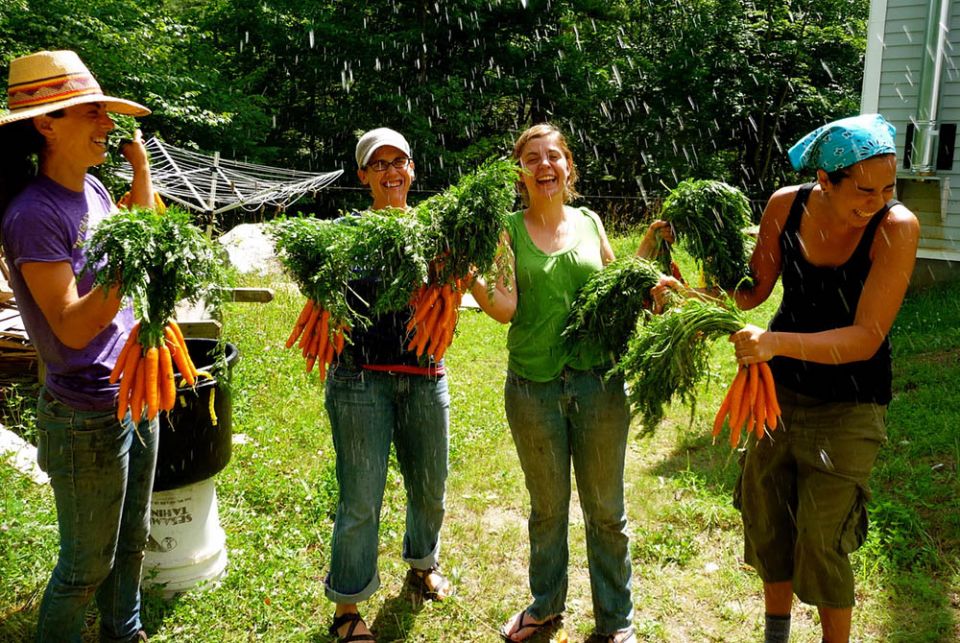 Iyad Abumoghli, director of the Faith for Earth Initiative, told EarthBeat in an email that the Faith Plans program approach of "walking the talk" represents the best kind of approach to mobilize local communities, but also powerful organizations.

"Faith leaders have been calling member states and big economic actors to take action on climate change and other environmental issues," he said. "But it is also the moral responsibility of faith actors to contribute to changing the course of environmental crisis by implementing it on the ground."

The Faith Plans program mirrors a similar undertaking within the Roman Catholic Church. In mid-November the Vatican officially opened enrollment for its Laudato Si' Action Platform, which invites Catholic institutions large and small to commit to seven-year plans to complete seven sets of sustainability goals and actions, guided by Pope Francis' 2015 encyclical "Laudato Si', on Care for Our Common Home."

In fact, the Laudato Si' Action Platform is also one of the Faith Plans partners. Gold, who is also board chair of the Laudato Si' Movement, called the action platform "an anchor" as one of the more advanced faith-based efforts for environmental action so far.

"All the other faith communities are learning from that platform, but also then being able to develop their own versions of that that really is their faith," she said. 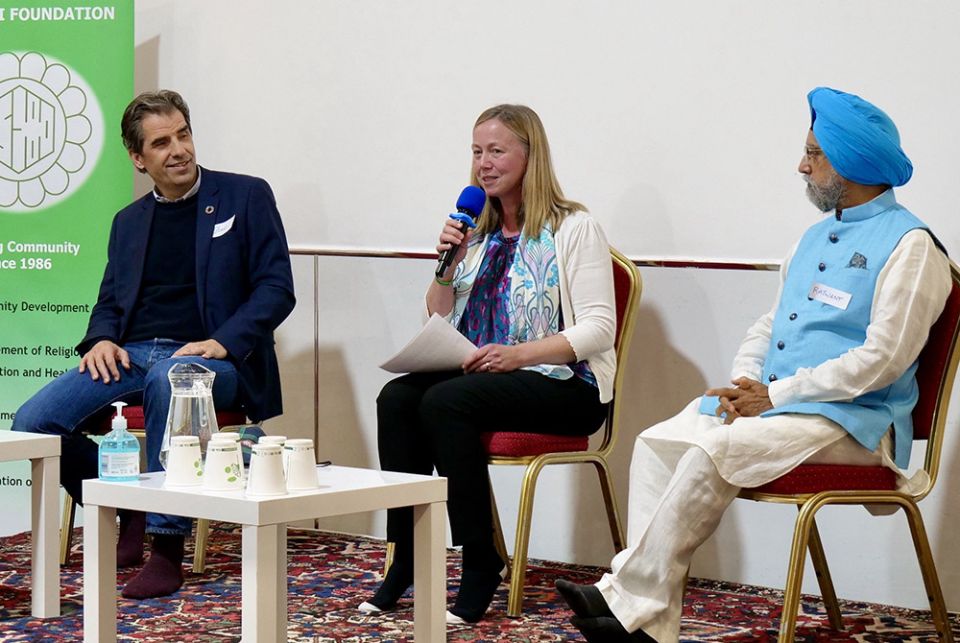 Lorna Gold, center, project lead of the FaithInvest Faith Plans program, speaks about the initiative at an event Nov. 7 in Glasgow, Scotland, during the COP26 U.N. climate change conference. Also pictured, from right, are Olav Kjorven of the food systems start-up EAT, and Rajwant Singh, president of EcoSikh. (Courtesy of FaithInvest)

Gold and Palmer were among FaithInvest staff spreading the word about the Faith Plans program at the U.N. climate conference, COP26, in Glasgow in November.

Appearing by video at one event at the Al-Mahdi Islamic Centre, Palmer described Faith Plans as "an audit … for us as people of faith to realize we are stakeholders."

"What do we do own? What do we run? What do we influence? What do we shape? How can we live faithfully so that through what we do, people see what we believe?" he asked.

Palmer said faith communities often have played a sort of "bystander role" of pointing out environmental problems and calling for action, rather than looking at what they can do through their own assets. He said Faith Plans embodies a Confucian saying to first practice what you want to preach, and then preach about what you do. 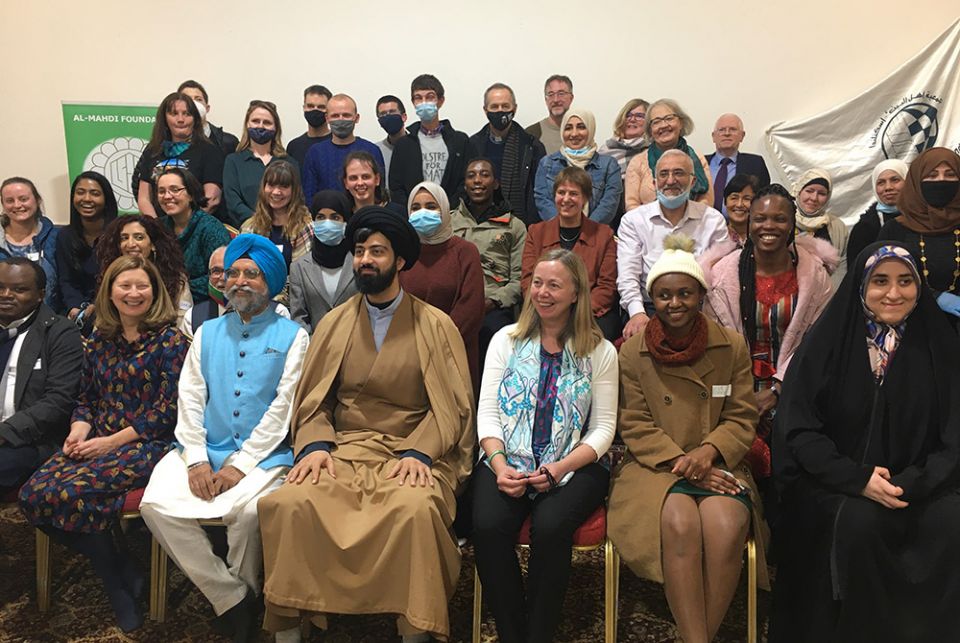 Faith Plans grew out of a similar effort in 2009 by the Alliance of Religions and Conservation, which Palmer also led, and which had backing from then-U.N. Secretary-General Ban Ki-moon and Prince Philip. At that time, more than 60 faith groups — including the U.S.-based Catholic Climate Covenant (then the Catholic Coalition for Climate Change) — made long-term commitments to address climate change and environmental issues.

That program resulted in the formation of numerous faith-and-environment organizations, including EcoSikh and the Daoist Ecological Protection Network. It also helped spur efforts such as a "green pilgrimage" during the Hajj for Muslims, Sikhs planting 300-plus micro-forests in India and elsewhere, as well as other reforestation projects and the formation of eco villages.

Gold credited that early effort with jump-starting faith engagement on environmental issues, in some cases starting from scratch.

"It led to the different faiths becoming very engaged in environmental issues from quite a low base, I have to say," she said.

The restart of the program was partially triggered by an invitation from the British government for faith communities to partner and participate in COP26. While many faith leaders present in Glasgow were disappointed with the overall ambition displayed there by world leaders, for some it galvanized their belief that religious communities cannot wait to act on their own — and that that in itself will only strengthen their calls for more serious responses to climate change from countries and businesses.

"Any significant decision that's taken at a leadership level within the faith communities, it sends a signal to the political world and also to the markets," Gold said.

Between now and next year, Faith Plans partners will be introducing the program to their networks and encouraging them to participate. Individual houses of worship and faith-based organizations can sign up through the Faith Plans website. A webinar on Dec. 16 will provide updates on the Faith Plans program and other faith-based preparations in the wake of the U.N. climate conference. 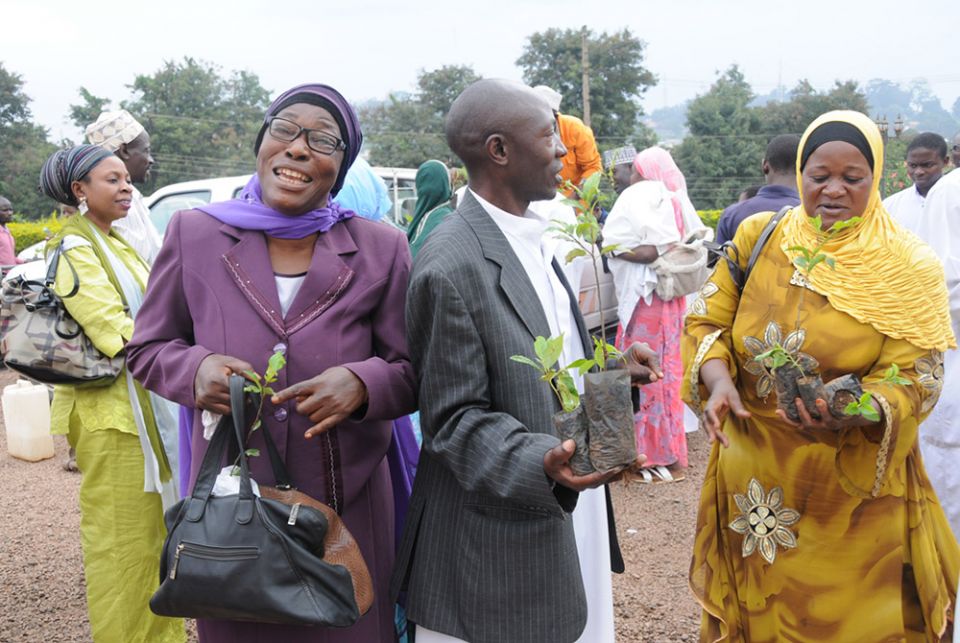 Ugandan Muslims receive tree seedlings during Greening Friday, an annual day to celebrate the environment, which has seen 250,000 trees planted since 2010. (Courtesy of FaithInvest)

Interfaith Power and Light, a U.S.-based faith-and-climate network, is encouraging its partner congregations to join the Faith Plans initiative through its Cool Congregations program, which offers religious organizations steps for reducing their emissions, primarily through energy projects.

More than 1,000 congregations participated in the program in 2020, which Interfaith Power and Light estimates collectively avoided 58,000 tons of emissions, and 52 congregations have become "Cool Congregation" certified, meaning they have reduced carbon emissions by at least 10%. Three have become completely carbon neutral.

Interfaith Power and Light president Susan Hendershot told EarthBeat the program is meant not only to help congregations take practical steps to lower their energy use, but also to show others that it's possible.

"I don't think any faith community becomes carbon neutral or even hits a 50% reduction unless this is something that is a part of the culture and values of that faith community," she said. "Where they say, 'This is how we want to live in the world as an act of faith and as an act of stewardship of the Earth. And so that means that we will make these plans and we will take these actions.' "

Hendershot said that Faith Plans can play an important role in helping faith communities see environmentally sustainable measures as a core way of living out their faith tradition. She added that while a lot of attention is paid to what nations and businesses are doing about climate change and other environmental threats, the role of religious congregations cannot be overlooked.

"[Faith Plans is a chance] for faith communities to really demonstrate what can be done when we work together," Hendershot said.