Q & A with Anna Robertson, on Catholic young adults and climate action 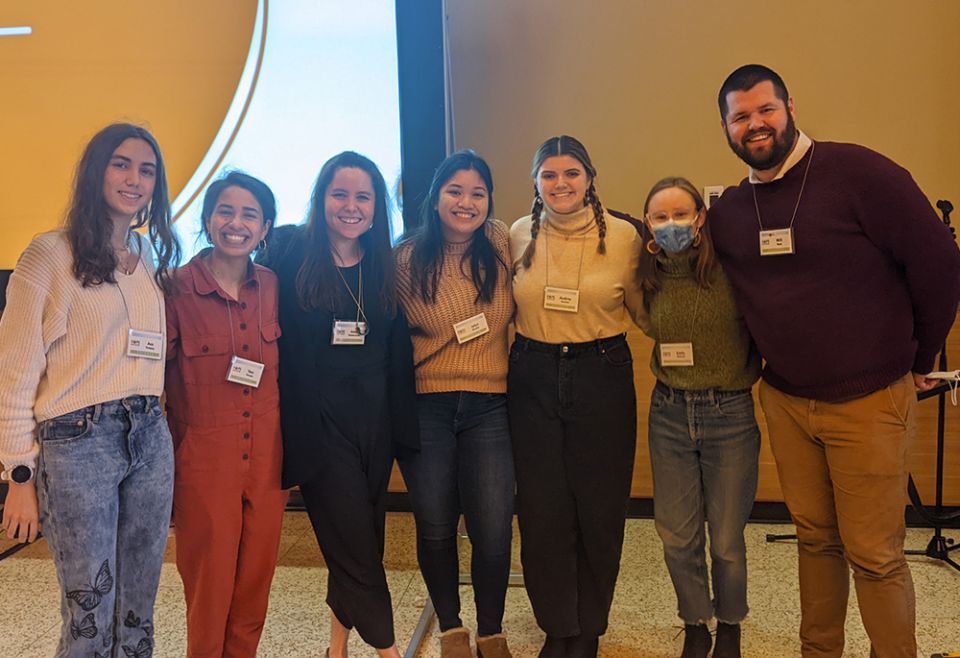 Anna Robertson (third from left) poses with Will Rutt (executive director, Intercommunity Peace and Justice Center) and youth panelists at an event sponsored by the Creation Care Network in early 2022 in Seattle, Washington. (Courtesy of Anna Robertson)

Anna Robertson is the Catholic Climate Covenant's first director of youth and young adult mobilization, a role she began in December 2020. After a year and a half working with Catholic youth and young adults with specific interest in climate change, ecological justice and creation spirituality, here's what she shared with EarthBeat about how we might best serve and accompany this particular group of U.S. Catholics.

The following conversation has been edited for clarity and length.

EarthBeat: What's the significance of your title being about youth and young adult "mobilization" instead of "ministry," which is more typically what we see in church groups? 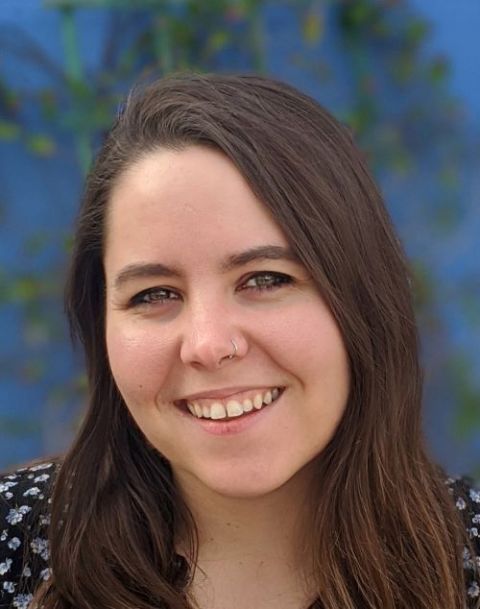 Robertson: I worked in campus ministry for five and a half years before I took this position, so that pastoral approach is always there for me. But when young people see this program, I don't want them to think, "Here's something that people designed for me." I want them to think, "Here's a way that I can get engaged and activated." Mobilization implies that it's not just another program that's intended to entertain. It's intended to activate.

There are many young people in the church for whom ecological justice is an important issue. Part of my task is to organize and activate them. Many of them already are taking action, but it's not frequent that they're doing so under a Catholic moniker with that being a forward part of their identity.

Has the focus of your work evolved in the time that you've been in this role?

From the beginning, I've had a desire for young people to be front and center. It's important to me that this is something young adults have a hand in creating. In this year and a half, listening and building networks of young people and the folks who work with them has been central to shaping what will be the Covenant's approach going forward.

Within the church right now, there's a shift toward embracing the protagonism of young people — that word is one I use a lot because Pope Francis used it in Christus Vivit, the apostolic exhortation that he wrote at the end of the synod on young people — and that's something that already was a value for me, so it's been cool to see the church is there too right now.

Our challenge is to both reach young people directly and also to work within structures where young people are present. That's something that has changed for me a little bit, trying to think more structurally as well as maintaining direct connection with young adults on the ground.

In April, the Covenant piloted a young adult integral ecology retreat in partnership with the Archdiocese of Chicago. And this coming year, we're hoping to pilot that in a few additional dioceses. That's an example of working with the existing structure of young adult ministry offices both at the diocesan and parish levels within the institutional U.S. Catholic Church. 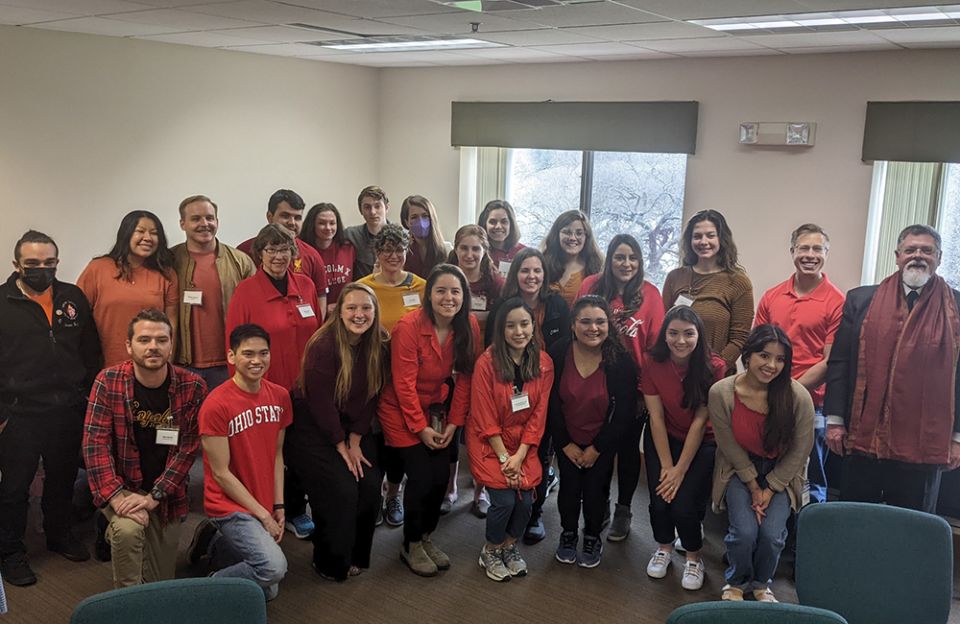 Attendees at a young adult integral ecology retreat co-sponsored by Catholic Climate Covenant and the Archdiocese of Chicago wear red and orange as a sign of solidarity with Missing and Murdered Indigenous Women, and survivors and victims of residential schools, at the invitation of Jody Roy, director of the St. Kateri Center in Chicago. Anna Robertson is pictured in the front row, fourth from the left. (Courtesy of Anna Robertson)

In addition to that integral ecology retreat, this year you've hosted the Ecospirituality Nights series, the Protagonists of Transformation webinar and now you're promoting the Wholemakers curriculum. How did you decide on these offerings?

As is often true of the first few years of any program, a lot of it is experimentation, trying things and seeing what sticks in conversation with those who are plugged into the community.

The Wholemakers curriculum is based on a presentation from the "Laudato Si' and the U.S. Catholic Church" conference at Creighton University last summer. It's the product of a working group of 30 young adults that came together in advance of that conference and were tasked with coming up with some offering to answer the question: What are the unique barriers and opportunities for mobilizing young people in the church around climate? After reaching a point of unity among the people in the working group, we sent it to a bunch of experts in climate science, young adult ministry, theology and other areas to get feedback, and now we're launching the pilot. We're seeking both individuals to sign up for virtual cohorts as well as groups — a young adult minister could apply to bring this to their community.

The desire for community has been at the foundation of a lot of the programs we have produced. There's a place for a national, virtual community — like the Ecospirituality Nights, which were the project of Desiré Findlay, who was at the time one of the Covenant's interns, and were really successful — yet as much as it's true that young adults want community, it's hard to get them to go on Zoom. They want local community, which primarily is what Wholemakers offers. It's a way to bring people together.

I used to hear young people asking for older adults to be honest and direct about the urgency of the climate crisis. But in recent years, it seems to me there's been a shift toward more calls for accompaniment and authenticity and less doomsday predictions. Based on your experiences, how best can we serve young Catholics in this regard?

I often use a term that I'm convinced someone else said first, but I can't figure out who, and that is "credible hope." It's our duty as leaders in the church to offer credible hope. Authenticity is important among youth and young adults and it's inauthentic to just hit people with facts and not include solutions. Doom and gloom are not the whole story. Many young people want to feel like their actions matter. And they want the church to show up in the spaces that they care about.

There's a lot of celebration around young people leading the charge on climate and saying that young people are our hope. For many people that can be worrisome. There is a longing for elders in this work. Many of the young people I work with are active agents of change and also have an appreciation for the need for self-care and resilience. And there's a sense of this happening holistically within community, rather than individually. 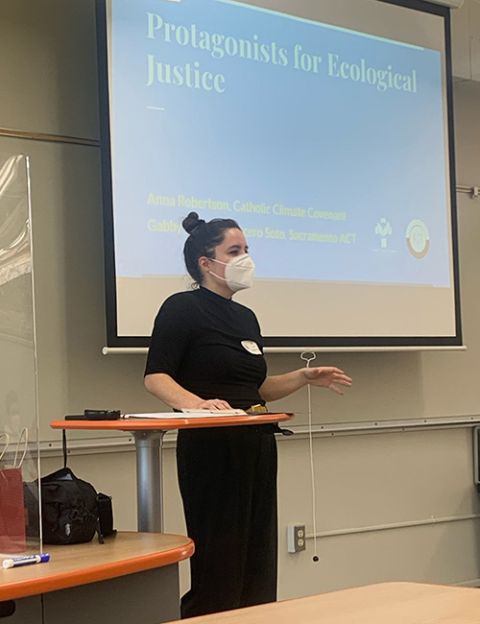 What contribution does the faith perspective bring to a movement that isn't always associated with religion?

Even in a lot of secular spaces, there's a turning toward resiliency-building practices. It supports our resilience to be connected to some kind of spirituality. Catholicism has this long tradition with many examples of saints — recognized or otherwise — who have held these tensions in their own times. In the Wholemakers curriculum, each session has a holy mentor whose journey can accompany this work. That's a real benefit to Catholic tradition, having that communion of saints behind us.

When it comes to the climate crisis, Pope Francis articulates well that it's a spiritual crisis as much as anything else, that it arises from the way that we conceive of ourselves as humans in relationship to God and in relationship to each other. In order for change to happen that's not superficial and inadequate, we need ecological conversion. It creates space in our movements for the spirit to move.

Is there anything else you've learned through the Covenant's youth and young adult mobilization programming that you would like to share?

Often there's a story in the church that there's a divide between the "social justice Catholics" and the "devotional Catholics," and it's never that simple. Continuing to operate within that framework keeps us from being able to build powerful movements. Time and again, powerful leaders break open that dichotomy. Some of our most potent leaders are people who exist in those tensions. When we raise those voices up, we make it easier for other people who hold seemingly contradictory aspects as parts of their identities to imagine that they can be active too.

There's no contradiction between devotion and social justice, but so many of us feel that there is. That is a lesson I hope I never stop learning.

Any advice for young people, or for the U.S. Catholic Church in general?

Despair is part of the human condition. But I feel less despairing about the state of our world now than I have in the last decade at any other point and I think it's because I'm actively facing and working toward solutions. There's something to be said for having that long view. 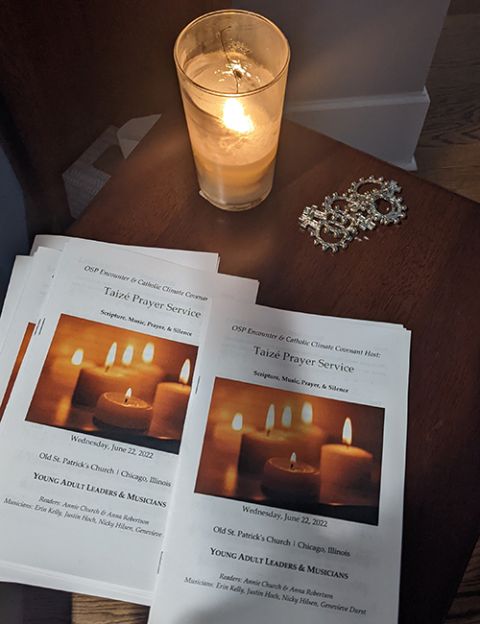 There's a prayer by Fr. Ken Untener, often associated with St. Óscar Romero, that says, "We're prophets of a future not our own." Whatever way social change happens, little contributions build and then eventually there's critical mass. We can set ourselves up so we're ready for that moment, but we can't entirely orchestrate the moment and we can't predict how our contributions are going to interact with the contributions of others. Both having an openhandedness around the outcome that I'm working for, and keeping my life tied to this work are things that help my climate despair.

To the U.S. Catholic community:

I get asked very often: How do we get more young people to come to this event? I have a lot of compassion for that question, because I think there's a longing for the gifts that young people bring to parish spaces.

I also want to challenge people to ask a different question: How can we show up where young people already are and listen to them? If young people aren't coming to parishes, then there are needs that young people have that either aren't being met or that they don't expect will be met there. What are those and how can we make sure that we're creating spaces where their needs are being met?

I would love to see more meaningful relationship with frontline communities. When I say, "Pay attention to where young people are and go there," oftentimes, you'll find them in the streets. They're showing up for marginalized communities who are organizing around their own livelihoods. The climate crisis and other environmental injustices impact people in disproportionate ways. Our faith calls us to follow the lead of those communities and to trust that God is working in a particular way where there's suffering. We have to pay attention to who's on the receiving end of climate injustice. If you want to attract young people, this is where young people are. Stephanie Clary is NCR environment editor. Her email address is sclary@ncronline.org. Follow her on Twitter at @scherp01.

EarthBeat | Q & A with Anna Robertson, on Catholic young adults and climate action