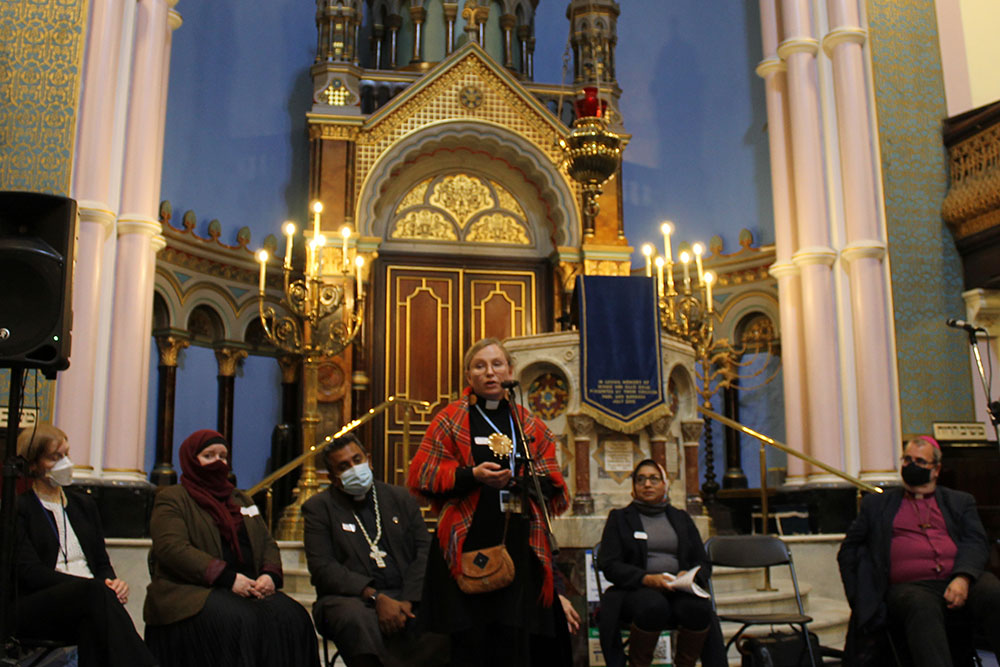 Representatives of Scottish religious communities participate in a multifaith dialogue on climate change at Glasgow's Garnethill Synagogue Oct. 31, 2021, ahead of the start of the COP26 U.N. climate conference. (NCR photo/Brian Roewe)

Less than a year after the Glasgow climate change summit, faith leaders in Scotland are among those worried the "fragile win" reached there may be backsliding.

In a letter to the head of COP26, the United Nations climate change conference held in November 2021, representatives of more than 30 Scottish faith communities urged him to ensure countries honor the commitments they made in Scotland.

"We call on you to ensure that the COP26 commitments are put into effect and that climate justice and real energy security are available to all," said the letter, organized by Interfaith Scotland, addressed to Alok Sharma, the British politician and COP26 president, who visited the country on Monday to mark six months since the Glasgow Climate Pact was reached.

As part of that deal, countries committed to come to the next U.N. climate summit, set for November in Egypt, with new, improved plans to reduce heat-trapping greenhouse gas emissions — an acknowledgement that nations are currently off pace to meet the Paris Agreement target to limit average global temperature rise to 1.5 degrees Celsius. 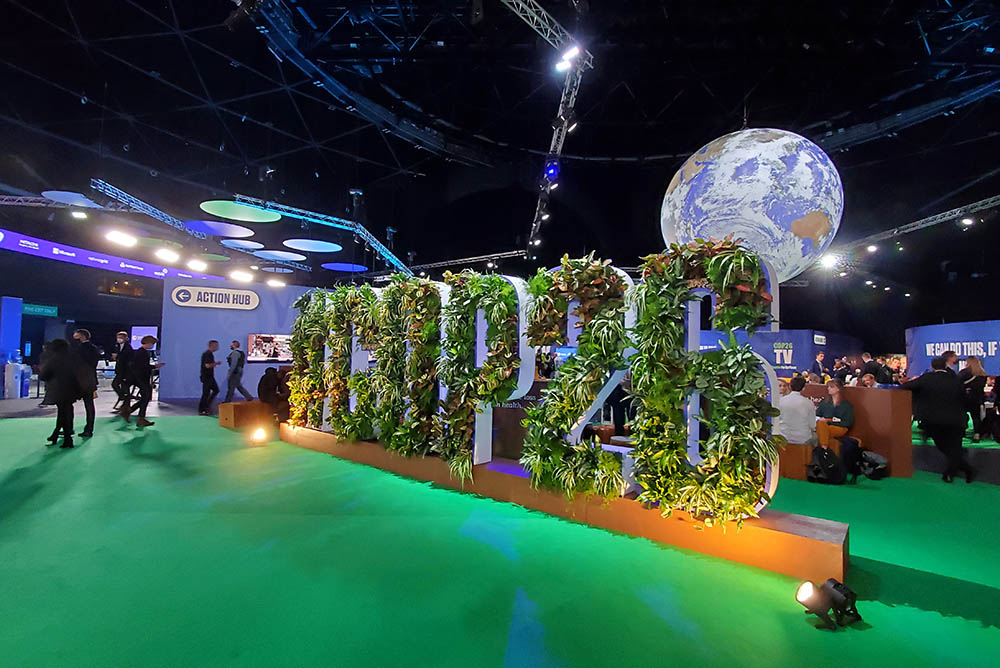 The United Nations climate change conference, COP26, was held in Glasgow, Scotland, in November 2021. Less than a year later, faith leaders in the country are worried countries are waning in their climate commitments amid emerging crises, such as the war in Ukraine and rising inflation and energy costs. (NCR photo/Brian Roewe)

The Glasgow pact also agreed to a "phase-down" of coal and fossil fuel subsidies, which represented the first time international climate negotiations formally acknowledged the need to reduce the use of fossil fuels, which are the primary driver of climate change.

Under the Glasgow pact, nations also stated the need for richer countries, like the United States and the European Union, to provide support to developing countries for losses and damage already suffered due to the impacts of climate change. It also recognized the failure of developed nations to provide $100 billion annually by 2020 to developing nations to assist with climate mitigation and adaptation measures, with aspirations to reach that target now by 2023.

Delivering comments Monday in Glasgow, Sharma said "the world has changed" in the short time since the Glasgow Climate Pact was achieved, as the war in Ukraine has sent energy prices and worries soaring while inflation has spiked amid economic recoveries from the coronavirus pandemic, which together with the war and climate change has exacerbated hunger insecurity around the globe.

"Climate change is a chronic danger. A danger that will be with us for generations to come," Sharma said. "And so we must continue to confront it, as we also deal with the pressures of the present. That is why it is imperative we deliver the Glasgow Climate Pact."

The faith leaders in their letter requested a meeting with Sharma to discuss what progress has been made so far. Maureen Sier, director of Interfaith Scotland, called the Glasgow Climate Pact "a fragile win," echoing words that Sharma used to describe the agreement after it was completed.

Sier told EarthBeat that a key concern is the lack of information about what has been done to follow through on the Glasgow pact.

"There is deep concern that the Climate crisis has slipped off of Government's radar" due to various crises around the world, she said in an email.

"However the faith communities are absolutely convinced that the climate crisis is an issue of global justice and is in fact a devastating international global emergency," she said. 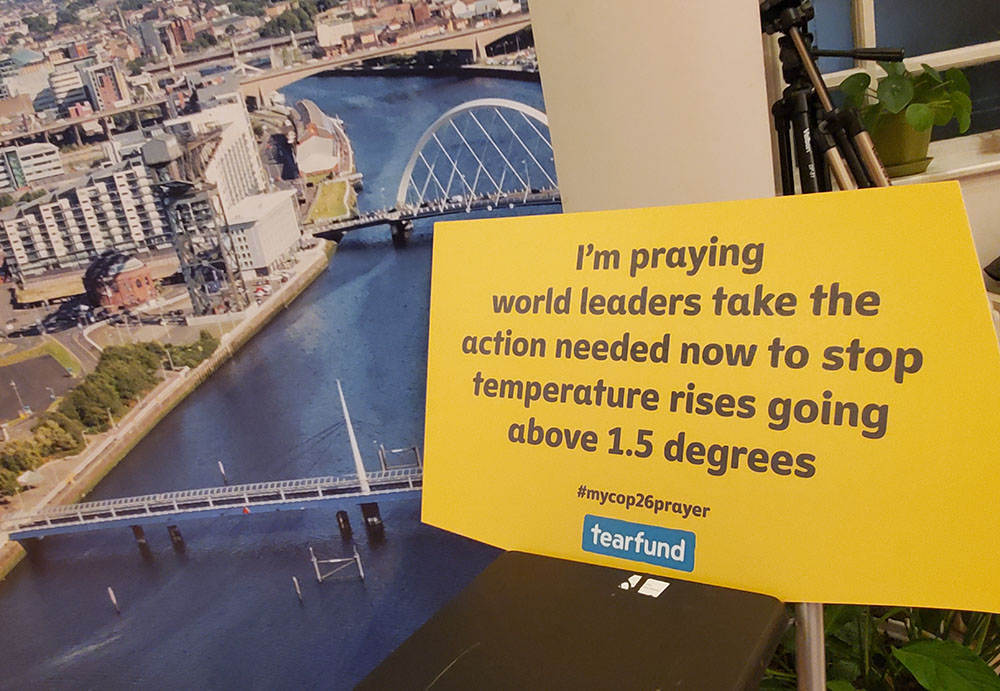 Sharma in his speech said that the current crises "should increase, not diminish, our determination to deliver on what the world agreed here in Glasgow. Because they show with devastating clarity why it is imperative to do so. And to do so now."

Recent reporting by the United Kingdom-based Guardian found that progress on the Glasgow pact's goals has been scant, with countries still short on climate financing and coal use and deforestation accelerating, while fossil fuel companies have plans for multibillion-dollar oil and gas projects that if brought online would blow the world past the Paris Agreement's 1.5 C temperature target.

"Many of us are working across Scotland to promote community action on climate change," they wrote in the letter. "We will redouble our efforts and assure you of our continuing support to ensure the commitments made at COP26 are put into effect."

The next climate summit, COP27, is set for Nov. 8-20 in Egypt's Sharm El Sheikh, a resort city on the shore of the Red Sea. COP27 is expected to highlight the issues and concerns of African nations and developing countries, many of which are on the front lines of climate change.