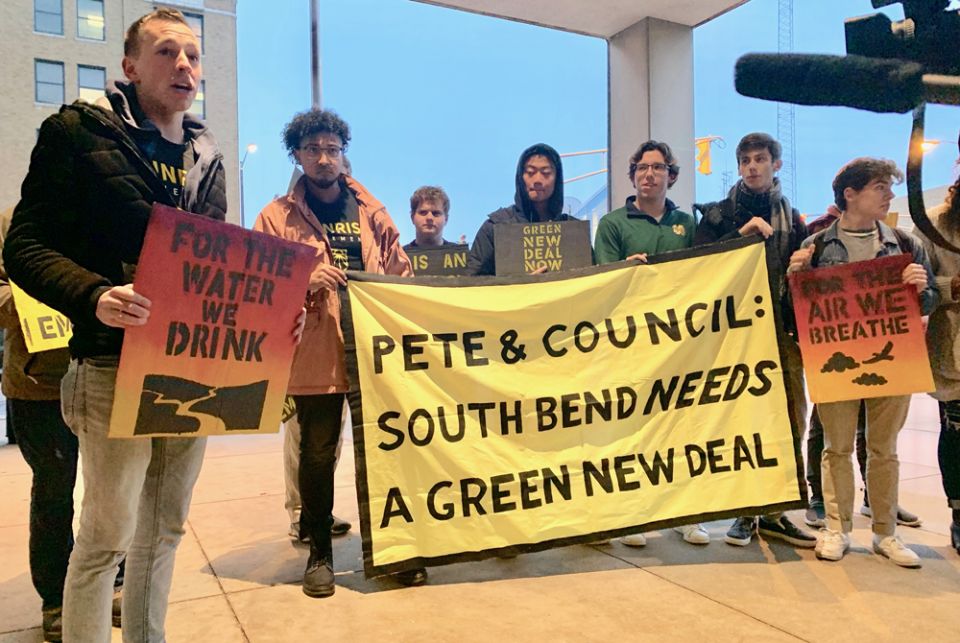 South Bend, Ind. — One by one, the students stepped before the South Bend Common Council Nov. 18 to speak up on behalf of a future they'll be around to enjoy or suffer.

Some spoke in quite technical terms about the climate action plan they want the council to beef up. Others were more passionate.

"I'm terrified!" Notre Dame freshman Ian Baker told the council, as he envisioned the impact of climate change on the northern Indiana community where he has lived for 16 years. Before appearing in front of the council, Baker and other students active in the Sunrise Movement demonstrated on the sidewalk, calling on Mayor Pete Buttigieg and the council to enact a local version of the Green New Deal.

Later that evening on campus, three former Notre Dame students recalled the demands they made of the university 50 years ago in a protest that got them thrown out of school. They were among 10 students suspended for a semester under the "15-minute rule" enacted by former Notre Dame President Holy Cross Fr. Theodore Hesburgh.

Addressing a few dozen students and faculty members — many of whom were not yet born in 1969 — John Eckenrode explained his decision to block recruiters for the CIA and Dow Chemical Co., makers of an especially vicious weapon used in Vietnam, from entering an office to meet with students.

"I was troubled by the war and the stark contrasts between my Catholic upbringing and the words of the Gospel and what was going on in Vietnam," he said. He described himself as "an ordinary student" who ended up protesting instead of studying for his organic chemistry exam.

I was also a Notre Dame student at the time, a junior majoring in theology and covering the November 1969 event as campus correspondent for NCR.

Back in South Bend last week observing both groups of students, I found myself wondering if today's young climate activists will get a better hearing than the Notre Dame Ten did 50 years ago.

The two groups both raised central questions about the role that a Catholic university should play in addressing life and death moral issues. It almost had me wishing I could return to campus in November 2069 to join today's climate activists in a look back at the health of the planet.

Garrett Blad, a 27-year-old 2015 Notre Dame grad with majors in environmental science and sustainable policy, said he was "incredibly inspired" when Pope Francis' encyclical, "Laudato Si', on Care for our Common Home," was issued at the end of his senior year.

Now serving as national press coordinator for the Sunrise Movement, he is also a leader of the South Bend branch of the organization.

In a telephone interview Nov. 25, he said Laudato Si' represented "the first time in my life I saw a religious leader telling the truth about the climate in crisis — and demanding a spiritual awakening to address it."

But Blad is not impressed with the insider approach to climate change taken by Notre Dame President and Holy Cross Fr. John Jenkins.

In an effort to address the crisis, Jenkins has convened two meetings with oil company CEOs at the Vatican and plans another next year at Notre Dame — steps Blad dismisses as an "abdication of leadership and the moral beacon that the University of Notre Dame should represent."

"It's utterly shocking to me that Fr. Jenkins believes spending time rubbing elbows with fossil fuel executives — the people who got us into this crisis — is a viable and moral solution," he said.

To date, the South Bend Sunrise group has not engaged in the kind of civil disobedience employed by such groups as the Christian Climate Action group, an affiliate of the Extinction Rebellion. But Blad said they may do so as soon as the Dec. 6 climate strike planned for South Bend and elsewhere.

Baker, the Notre Dame freshman, told the council that the draft of the city's climate action plan is filled with vague goals lacking specific targets. He and other students demanded that the city come up with something better. 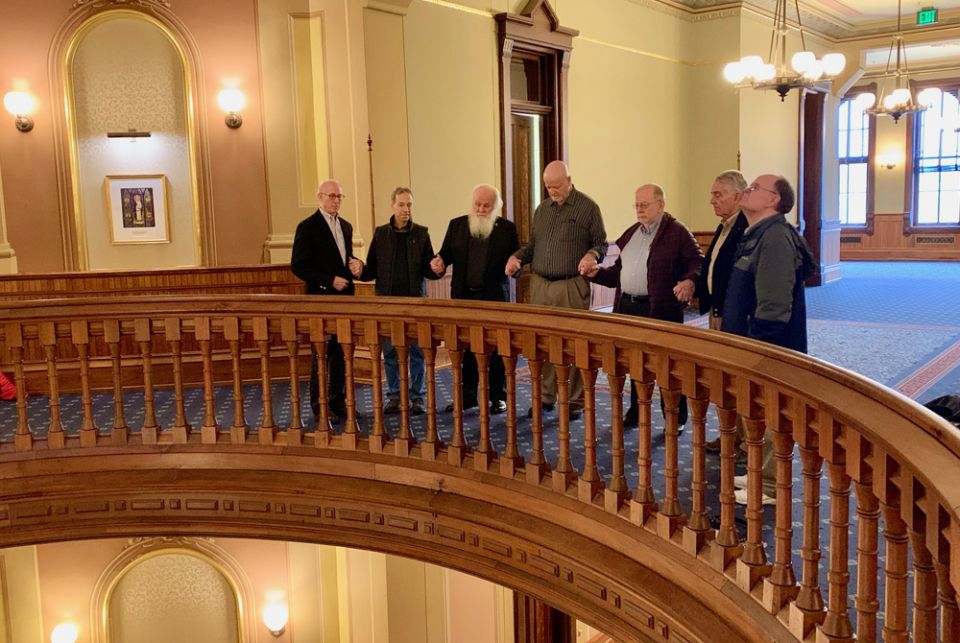 Members of the Notre Dame Ten and supporters take a moment on Nov. 18 to reflect near the door they blocked recruiters from the CIA and Dow Chemical Co. from meeting with students 50 years ago to the day. Left to right: Mark Mahoney, John Eckenrode, Fr. Emmanuel Charles McCarthy, Chris Cotter, Carl Estabrook, Mark Dellamano and John Cox. (NCR photo/Bill Mitchell)

Accompanying Eckenrode on campus Nov. 18 — 50 years to the day after their protest — were fellow protesters Mark Mahoney and Chris Cotter.

Mahoney, an attorney who said his suspension has encouraged him to "stick my neck out" in defense of clients, said he's still waiting for the university to come to grips with what he described as the core conflict between Christianity and the military.

"We revere military service," he said, referencing Notre Dame's Army, Navy and Air Force ROTC programs, "without any real examination of how that can be squared with the teaching of the Gospels."

Cotter, who returned to Notre Dame after his suspension but dropped out, became a physical therapist after graduating from the Ohio State University.

As an adult catechist and Secular Carmelite, Cotter has developed and presented courses on such topics as contemplative prayer and Carmelite spirituality.

At the evening session, he posed a challenge to the current leaders of Notre Dame, asking: "How can a university that calls itself Catholic permit its students to be trained to participate in our nation's unjust, immoral and imperialistic wars that have resulted in the deaths of countless innocent civilians?"

He also asked: "How can a university that calls itself Catholic, in contrast to the clear teaching of the Catholic Church, award honorary degrees to individuals who believe that killing children before they are born is not only not evil but actually virtuous?"

Cotter did not mention Barack Obama by name, but the Notre Dame degree that the then president received in 2009 resulted in widespread protests as well as ongoing debate among supporters and opponents of abortion rights within the Notre Dame diaspora. It also prompted discussion of the "seamless garment" approach that condemns abortion along with the killing involved in military service and capital punishment.

Eckenrode, who graduated a semester late because of his suspension, went on to get a Ph.D. in psychology and focused much of his research on what it takes to prevent violence against children and adolescents.

"If there is a lesson in my example," Eckenrode told the gathering at Notre Dame's Eck Visitors Center, "it is that there are many ways to respond to violence and injustice. You don't always have to be the leader or the person on the front pages. You can take small steps that can make a big difference."

Addressing the university's relationship with the military, he said: "There are no brass plaques on campus for conscientious objectors to the various wars."

The idea of some sort of campus acknowledgement of war resistors was also raised by Fr. Emmanuel Charles McCarthy, a priest of the Eastern rite of the Catholic Church who resigned his position as director of Notre Dame's program on nonviolence after the student suspensions. A 1958 Notre Dame graduate, McCarthy said a proposal for such a memorial was made some years ago but went nowhere.

I also asked him why the university, which commemorates veterans with a massive memorial, offers no recognition of students who resisted war as pacifists following gospel precepts.

"I have not thought of that," he said. "It's worthy of thought."

He said military service and pacifism are both part of a Notre Dame "broad tradition that has within it tensions."

In a follow-up email Nov. 24, Jenkins said he'd had a meeting later in the week with faculty members working on a project that would portray warfare.

As a result of the questions raised last week, he said, he "ask(ed) them to include a pacifist voice."

One step at a time.

Perspective | Student activists speaking up for the planet, then and now