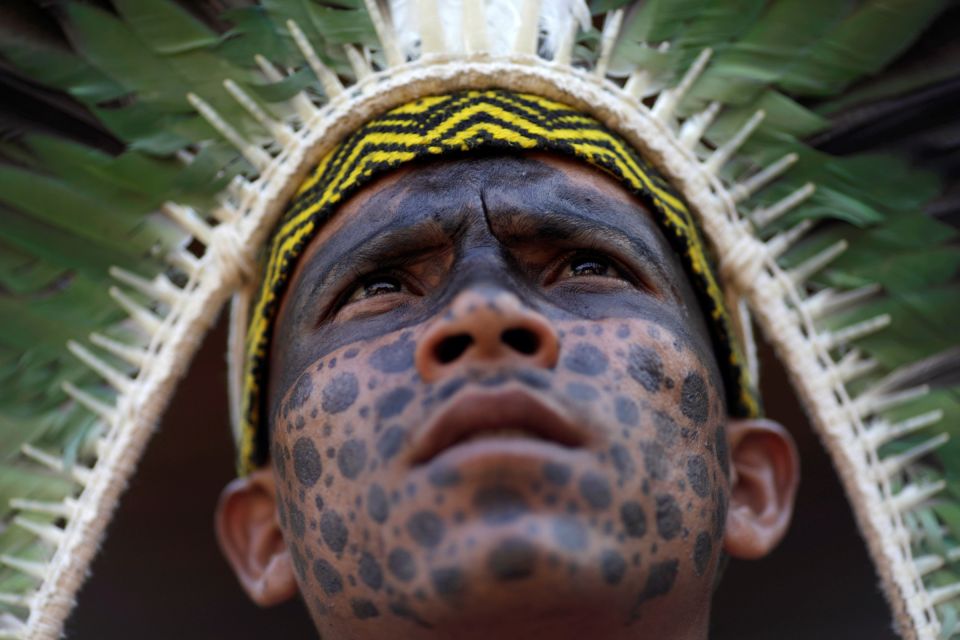 A member of the Shanenawa tribe observes an indigenous dance during a festival to celebrate nature and ask for an end to the burning of the Amazon, in the indigenous village of Morada Nova near Feijo, Brazil, Sept. 1, 2019. The Brazilian Catholic bishops are pressuring the government to guarantee the safety of several Amazonian indigenous peoples. (CNS photo/Reuters /Ueslei Marcelino)

"Our house is burning. Literally. The Amazon rain forest – the lungs which produces 20 percent of our planet's oxygen – is on fire. It is an international crisis."

These were words tweeted by French President Emmanuel Macron on August 22 as he urged G-7 leaders to take common action to stop Amazon fires thought to have been deliberately started. Compare that urgent call for global solidarity on behalf of our planet with what the far-right wing president of Brazil has said. Echoing what has become a dangerous trend among several world leaders to undermine facts, Jair Bolsonaro has dismissed the findings of Brazil's National Space Research Institute. The significant increase in 2019 fires and deforestation is simply, according to him, fake news.

Similar to the trend we have seen here in the U.S. with the Trump administration, Bolsonaro's political ideology undermines facts and his economic-driven policies threaten the interdependence of life on our planet. His recent comments to European leaders exemplify the troublesome narcissistic political approach to global security and health we see creeping in various parts of the world: "You have to understand that the Amazon is Brazil's, not yours.  If all this devastation you accuse us of doing was done in the past, the Amazon would have stopped existing, it would be a big desert."

The global importance of preserving the Amazon is well established as a scientific fact. Consider the following characteristics of this tropical region. The Amazon is the largest rainforest area in the world and is rich in biodiversity. One fifth of the world's bird species live here with over 300 species of hummingbirds, just one example of the multiplicity in one collective of birds. It houses one third of the world's flowering plants and over 16,000 different tree species. Over 2 million insects species and one in five of the world's fish species can be found in this region.  The Amazon's rainforest creates rain, which in turn affects the supply of fresh water not only regionally but also globally. And without the adequate supply of fresh water, the life of plants, animals and human beings comes under threat. As the National Geographic stated recently, "The loss of just a fraction more of this moisture-creating forest could lead far more of it to dry out, which would reduce rainfall even more, in a self-reinforcing spiral." All of us need to know that deforestation is a permanent ecological change and is considered to be one of the main causes of the global climate crisis.

Responsibility for the recent fires and deforestation in Brazil has been blamed on economic opportunities related to the mining, logging, agricultural and meat industries. It is not unlike what is happening in the U.S. with the Trump administration pulling back support for laws and policies that protect the environment. For example, the Trump administration withdrew from the 2015 Paris Climate Agreement endorsed by 185 states aimed at curtailing carbon emissions. Bolsonaro's administration has also lessened environmental protections, compromising the health of the Amazon region and all of its peoples. His policies have even caused indigenous communities engaged in ethnic conflicts to put aside their hostilities in order to come together to fight what they now perceive as their common enemy. Bolsonaro may want to make Brazil great, but his policies have triggered alarm bells among many, especially among indigenous communities that have had a long history of relating to the Amazon.

Early next month (October 6-27), Pope Francis will convene the Synod of Bishops on the Amazon in Rome. He will gather bishops and ecclesial representatives from the nine countries in the pan-Amazon region, including representatives from indigenous populations. The pope named Brazil's Cardinal Claudio Hummes to serve as "relator general" of the synod. We already know from the preparatory document that the option for the poor, preserving the natural environment, and deforestation are central themes in the agenda. No one can doubt that Pope Francis' vision of an "integral ecology" will be central to address the ongoing threats to human and other forms of life in the Amazon region.

In his signature teaching on the environment, "Laudato Si', on Care for Our Common Home," Francis writes extensively on the subject of an integral ecology, highlighting the human roots of the ecological crisis, calling for the ecological conversion of minds and hearts. The pope warns against environmental degradation and how our failure to protect our planet increasingly deepens the divide between rich and poor, having the greatest impact on already vulnerable populations. His theological reading of this crisis in the second section of the encyclical leaves no doubt that anthropology and ecology belong together. As the pope invites us to consider, it is not just science that affirms the interdependence of all life and the need to preserve bio-diversity, but also our most cherished biblical and theological traditions. The second story of creation (Genesis 2-3) makes this point amply clear: God breathes forth life from the common and fertile earth ('adamah), creates and diversifies all life, including the human earth creature ('adham), and intends for this life to exist and survive through interdependence. 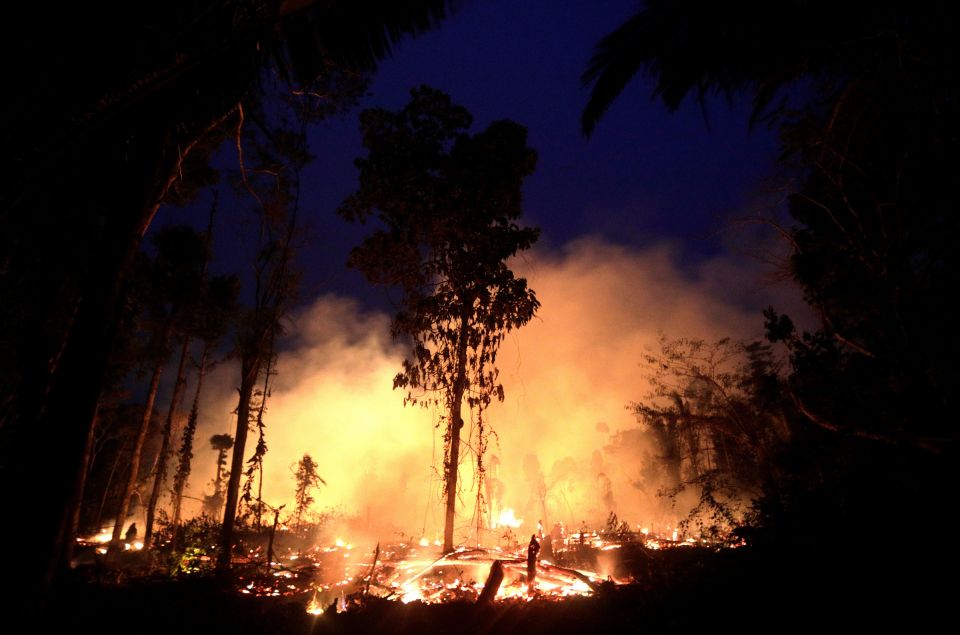 A fire burns a tract of Amazon jungle Sept. 2, 2019, as it is cleared by a farmer in Machadinho do Oeste, Brazil. (CNS photo/Reuters /Ricardo Moraes)

Fire has often been used in the Christian tradition as a symbol of life and vitality. Seen from this perspective, we could call for "fire" to burn in our house.  But let's be perfectly clear: our house cannot burn as a result of human ideologies mainly driven by economic profit. The only fire we Christians can intentionally pray for and seek is the one associated with the hand at work in creation (Genesis 2:5-9), at the conception of Jesus (Luke 1:35), and at the birth of the church (Acts 2:1-13). I am of course speaking of the fire associated with God's Spirit, whom Christians claim as Lord and giver of life.

At Pentecost, Catholics celebrate the Spirit who comes in tongues of fire to give life and to preserve the bio-diversity of creation. One of the readings used during the Pentecost liturgy is Psalm 104. This psalm speaks to God's greatness and links this greatness to God's ongoing creative and sustaining agency with respect to the earth and all its biodiversity. This psalm refers to fire and to its flame as God's ministers. It speaks of springs as life-giving waters that abundantly nourish "the trees of the Lord." (16) The psalm lauds God for all God's wonderful works for indeed, the psalmist affirms, "In wisdom you have made them all; the earth is full of your creatures." (24) And then, in a move that de-centers the human being and places God as the agent of a life-saving creation history, Psalm 104 offers hope that our endangered earth and its biodiversity might still be saved: "When you send forth your spirit, they are created; and you renew the face of the earth." (30)

One thing is for sure. The earth cannot be made great again unless we fight the idolatry that has sinfully made gods of economic profit, racial privilege and abuse of all creation. Fighting those idols will open us to encounter God's mystery in our common home, a home created rich in diversity, whose ongoing sustenance requires solidarity with those made most vulnerable by the indifference and sinfulness of our very human-made ecological crisis.

Column | Our 'common home' is burning