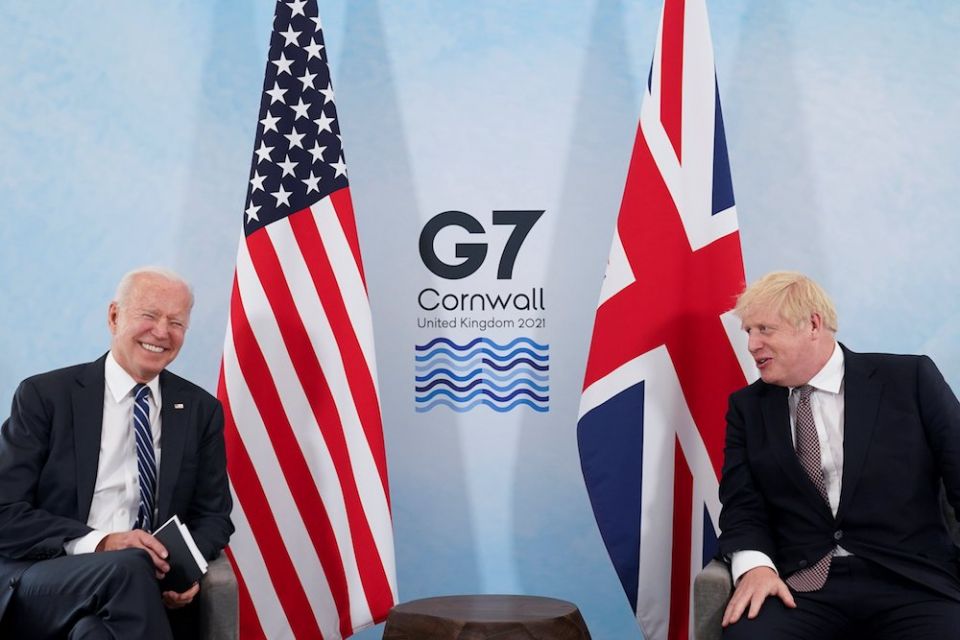 Catholic bishops of the United Kingdom urged world leaders gathered there for the G7 summit to ensure "a sustainable future for our global community" in their economic responses to the interlinked global challenges posed by the coronavirus pandemic and climate change.

"You have the power to make choices and policies which will allow us to build back a fairer, greener, global economy," three bishops wrote in a June 7 letter addressed to British Prime Minister Boris Johnson. A copy was sent to Alok Sharma, president of the COP 26 United Nations climate summit, which is scheduled for November in Glasgow, Scotland.

The G7 summit is being held June 11-13 in the seaside county of Cornwall, where leaders of the world's seven richest countries per capita — the United States, United Kingdom, Canada, France, Germany, Italy and Japan — are expected to discuss critical geopolitical issues, including the global response to the pandemic and action on climate change.

The bishops said the environmental, economic and social crises facing the world "are inextricably linked," referencing a passage from Pope Francis' 2015 encyclical "Laudato Si', on Care for Our Common Home." They pointed to the "shocking rate" of biodiversity loss and the "human face" of the ecological crisis, where climate change has already caused suffering and in some cases even displaced people from their homes.

They pressed the leaders to support a sustainable recovery from the pandemic, to ensure fair access to vaccines and to move quickly to halt biodiversity loss and meet the goals outlined in the Paris Agreement, "so that we do not exceed the 1.5 C temperature rise, beyond which life on our planet will face dire consequences." They stressed the need to include developing nations in decision-making in each of those areas.

"The urgency of the global ecological crisis, and the teachings of our Catholic faith implore us to speak out, take action, and make decisions that benefit our planet and the most vulnerable in society," the bishops wrote.

The Catholic leaders' letter was signed by Bishop Richard Moth of the Arundel and Brighton Diocese and head of social justice for the Bishops' Conference of England and Wales; the conference's environmental lead, Bishop John Arnold of Salford; and Bishop William Nolan of Galloway, the justice and peace chair for the Scotland bishops' conference.

'The urgency of the global ecological crisis, and the teachings of our Catholic faith implore us to speak out, take action, and make decisions that benefit our planet and the most vulnerable in society.'

This G7 summit is the first that U.S. President Joe Biden will attend as head of state. Biden's election has been seen as a return to a reunified front on climate change for the G7 nations after former President Donald Trump dismissed climate science and temporarily removed the U.S. from the Paris Agreement.

This summit is also the first to place climate justice on the agenda.

How the countries agree to further press climate action, especially in the context of economic recoveries from the coronavirus pandemic, will be closely watched throughout the weekend. A key focus will be on climate finance, as countries are lagging behind their 2015 commitment in the Paris climate accord to mobilize $100 billion annually to help developing nations adapt to climate impacts, such as increased flooding, heat waves and destructive storms, which are already occurring.

Before the summit, U.N. Secretary-General António Guterres said the G7 nations face "an unforgivable lost opportunity" should they not use the post-pandemic period to shift toward green economies.

"2021 is a make-it-or-break-it year," Guterres said in an interview with several news outlets that are part of the Covering Climate Now news consortium. "I think we are still on time, but when you are on the verge of the abyss, you need to make sure that the next step is in the right direction."

Ahead of the meeting, finance ministers for the seven countries backed a move to require banks and companies to disclose their exposure to risks from climate change, Reuters reported.

But Guterres said he was "more than disappointed" that G7 nations have invested more in fossil fuels than renewables since the pandemic began. According to a report from The Guardian, that investment has totaled $189 billion in coal, oil and gas, or more $40 billion more than they spent on renewable energy.

Guterres urged the countries to end subsidies for fossil fuels and "to look at the real costs that exist in the economy, which means a price on carbon."

"If we do these things, many of the investments made to fossil fuels in the recovery phase will obviously not be profitable. They will be stranded assets with no future," he said.

In their letter, the U.K. bishops said the economic and technological races "have caused the exploitation of people and the degradation of our planet." They urged the G7 leaders to take actions to meet the Paris Agreement goals "and move as quickly as possible towards a zero-carbon economy."

"Energy and infrastructure are vital in supporting the poorest in our societies out of the pandemic and out of the ecological crisis, but we must look towards a future whereby we radically reduce our use of fossil fuels — something which the countries which you represent have a shared responsibility for, in ensuring fair outcomes for the benefit of all," they wrote.

The bishops added that government action alone is not enough. The Catholic Church in England and Wales has developed its "Guardians of Creation" project to research how a Catholic diocese can decarbonize, and is piloting it in the Salford Diocese. It is also working with CAFOD, the U.K. Caritas agency, to increase ecological awareness and education in parishes and schools, which have joined efforts to help those in need during the pandemic.

"This is the responsibility of every one of us, not just of government," they wrote.

"The past year has shown us what we can achieve when we work together towards common goals, but we must do more, and we need you to act now in cooperation to develop strategies and policies that will protect our common home."