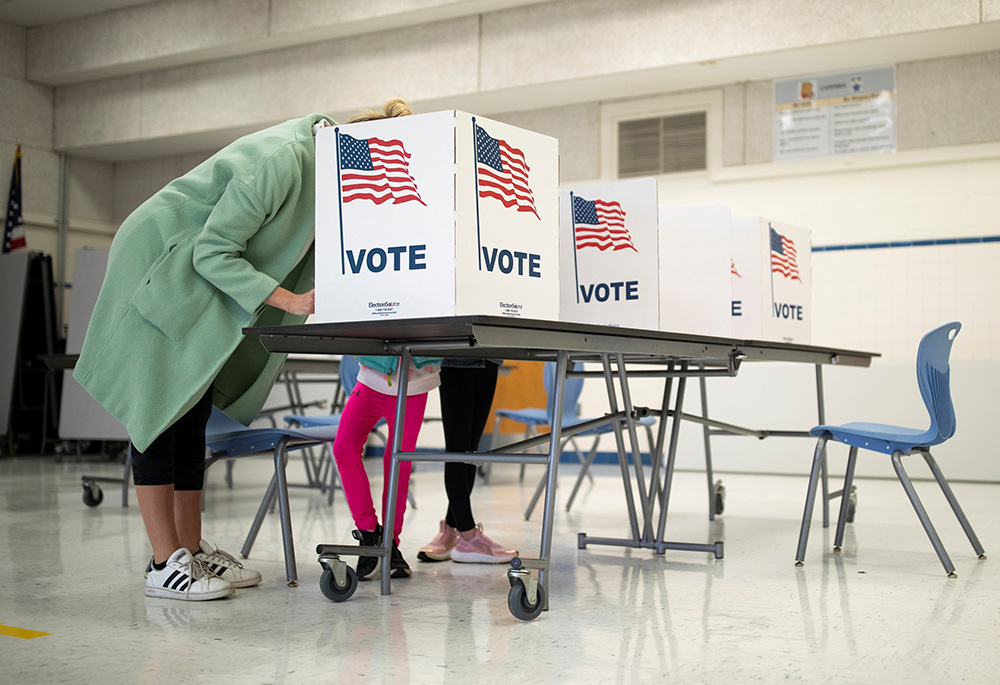 A mother in McLean, Virginia, casts her vote during the governor's race Nov. 2, 2021. (CNS/Reuters/Tom Brenner)

The United States Supreme Court's conservative supermajority bodes well for many high-profile cases to be decided this summer. The high court seems poised to overturn Roe v. Wade (and a contemporary case, Planned Parenthood v. Casey) in conjunction with their ruling to uphold a new Mississippi law banning abortions after 15 weeks of pregnancy. Unfortunately, this emboldened supermajority does not bode as well for other morally grave issues before the court, including those involving the environment.

For one case involving the Environmental Protection Agency emissions standards, the conservative court may rule against "delegated authority," even though previous conservative justices like Antonin Scalia have supported it. This would effectively nullify regulations intended to curb air pollution and climate change, making it virtually impossible to reduce greenhouse gas emissions by half within the next seven years — the rate experts say is necessary to avoid the worst impacts of climate change.

Thus, the noble intention of saving innocent lives by possibly abolishing Roe may ultimately prove fatal for the billions of innocent poor and their unborn who are most impacted by climate change. This tragic outcome is arguably a direct result of the ends-justify-means, single-issue politics that led to a conservative supermajority Supreme Court.

Since life depends on a healthy environment — that is, God's creation — protecting it is critical. Thus, opposition to protecting the environment by those who espouse the value of life is at best inconsistent with pro-life values; at worst, it is immoral. Ecumenical Patriarch Bartholomew, quoted by Pope Francis in his 2015 encyclical "Laudato Si', on Care for Our Common Home," even called it a sin.

The Vatican has made clear that mitigating climate change is critical to defending life. Meanwhile, the U.S. church has failed to effectively communicate to the Catholic faithful the moral significance of mitigating climate change. According to one study, over a period of five years (one before and four after the release of Laudato Si') only 56 of 12,077 bishops' columns (0.46%) described climate change as real or happening, and only eight of the 194 dioceses and archdioceses in the U.S. have offices dedicated to environmental justice or creation care. Rather, the U.S. bishops in "Forming Consciences for Faithful Citizenship," their guidance on voting for Catholics, focus on abortion as the "preeminent priority" when selecting leaders. 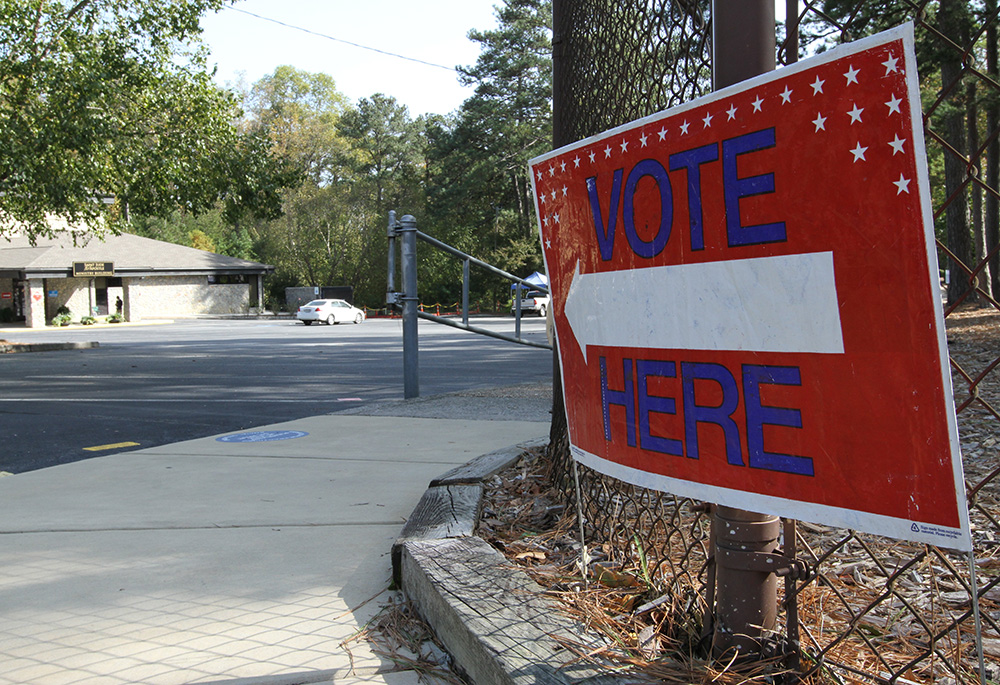 As evil as the scourge of abortion is, it is not the existential threat to human life — born and unborn, innocent or otherwise — that climate change is. As the latest report from the Intergovernmental Panel on Climate Change shows, climate crisis has already led to the suffering and death of millions of people worldwide from drought, flooding, famine and disease, and is linked to perinatal and child mortality. According to UNICEF, a billion children are at "extremely high risk" from the impacts of climate change. Scientific data and recent disasters, including recurring "100-year" floods and wildfires, point to a worsening of climate change that threatens the lives of billions of people. Ironically, those who are suffering the most and dying most often are the world's poor and vulnerable who have contributed least to the problem.

Despite these dire statistics, many pro-life conservatives have either remained silent about climate change or even opposed action to mitigate it. According to one study, Republicans are on average 46% less likely than Democrats to believe that climate change is human-caused, regardless of their level of education. This may explain why conservatives at all levels of government oppose climate legislation and vote against nominees for key federal positions who advocate for climate action. This includes opposing Sarah Bloom Raskin's nomination to lead the Federal Reserve and President Joe Biden's climate plans, and reducing solar incentives or blocking involvement in emissions reductions programs at in Florida, Pennsylvania and Texas. Many of these lawmakers were voted into office by pro-life voters simply because they oppose legalized abortion and support the overturning of Roe.

The single-issue approach to so-called "religious right" politics in recent decades amounts to using ends to justify means — something the church itself, as stated in the Catechism, considers immoral. This includes choosing senators and presidents who would likely appoint conservative justices, justified by the mere possibility of overturning Roe. This ends-justify-means approach to pro-life politics was apparently successful in 2016, given the large number of conservative judicial appointments made by the previous administration. Unfortunately, this outcome portends more far-reaching conservative rulings that favor industry over individuals or the common good. These rulings are likely to weaken or abolish regulations that safeguard life and health, such as public antivirus measures and limits to greenhouse gas emissions.

Emissions limits for greenhouse gases, produced in large part by burning fossil fuels, are based on the Clean Air Act, a law enacted by a Republican president but which now faces an uncertain future in today's conservative high court: conservative justices are advocating for limits on federal agencies' policymaking power and the congressional authority delegated to them. This includes agency-issued regulations in many areas that are critical to ensure industry compliance for everything from finance to safety.

In their voting guide, the U.S. bishops wisely state: "[A] voter should not use a candidate's opposition to an intrinsic evil to justify indifference or inattentiveness to other important moral issues involving human life and dignity." Myopically limiting our pro-life focus to only one grave issue subordinates other morally grave threats to life. Doing so also abrogates our moral responsibility to choose candidates with due consideration to the full spectrum of issues involving human life and dignity. The bishops go on to assert: "Care for Creation [emphasis theirs] is a moral issue. Protecting the land, water, and air we share is a religious duty of stewardship and reflects our responsibility to born and unborn children, who are most vulnerable to environmental assault. … Our Conference offers a distinctive call to seriously address global climate change" [emphasis theirs].

We must therefore choose public leaders and lawmakers who actually take climate change seriously — and then hold them accountable for any policies that exacerbate it, either through omission or commission.

As Christians who value God's gift of life, we are called to defend God's creation that sustains all life. As Pope Benedict XVI said, "Preservation of the environment, promotion of sustainable development and particular attention to climate change are matters of grave concern for the entire human family." If the reason for opposing abortion is to protect defenseless, innocent life from harm, then we must also protect the defenseless, innocent lives — born and unborn — who are now and will continue to be harmed by climate change.

In this upcoming election season, let's move beyond single-issue politics. As the conservative supermajority Supreme Court has shown, an ends-justify-means approach to choosing candidates can have far-reaching negative consequences for God's creation — including human life.

A version of this story appeared in the June 10-23, 2022 print issue under the headline: We must choose leaders who take all threats to life seriously.