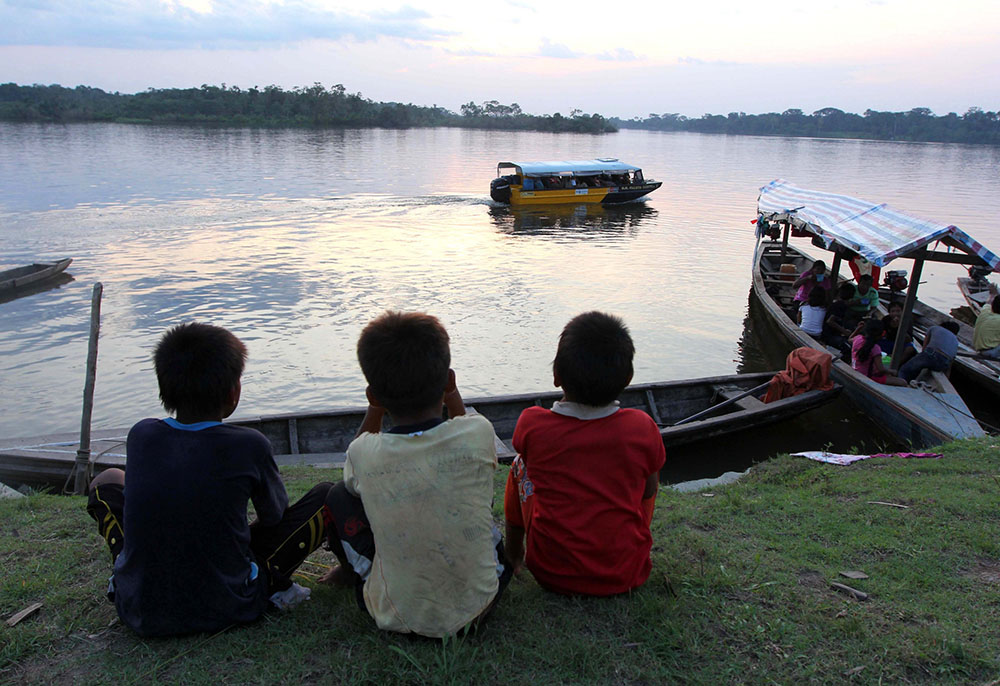 Several years ago, Rodrigo Pedroso began noticing an unusual pattern in the Indigenous villages he visited in the Amazon rainforest: Next to small, often abandoned Catholic chapels were newer, often larger evangelical churches.

The observation led Pedroso, a Brazilian journalist, to examine what might be leading people in Indigenous communities to essentially swap Christian faiths. It became the focus of a project he reported in the fall of 2019 for the Pulitzer Center on Crisis Reporting's Rainforest Journalism Fund, titled "River Missionaries: The Catholic Counteroffensive in the Amazon." 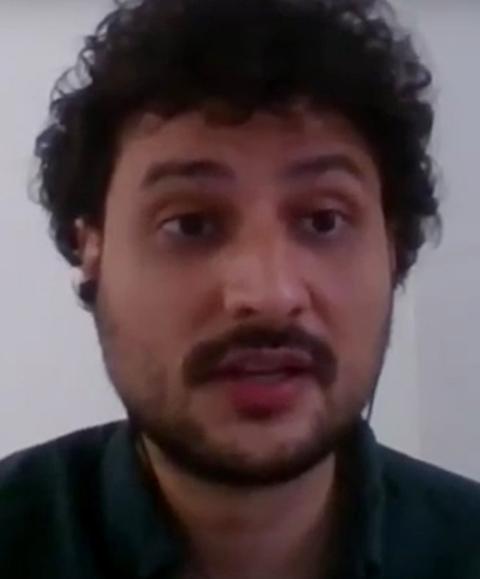 Rodrigo Pedroso speaks during the April 26 webinar on missionary dynamics in the Amazon. (NCR screenshot)

His project was published as the Vatican was exploring the challenges the church faces in the region in a special synod for the Amazon in Rome.

Pedroso shared his experience reporting on the project April 26 as part of a webinar on missionary dynamics in the Amazon hosted by the Berkley Center for Religion, Peace and World Affairs at Georgetown University, along with the Pulitzer Center. The conversation also included Niyanta Spelman, founder and CEO of the conservation nonprofit Rainforest Partnership, and the Rev. Fletcher Harper, executive director of GreenFaith.

"And a collision that's got great significance for the people involved at the front-line level, but also for the entire planet," he said.

Pedroso, who also reports for CNN, described that collision through the story of a Catholic sister named Marta, who is in her mid-30s. Originally from Mexico, she told him of the difficulties of missionary work in the Peruvian Amazon: a new culture with new foods, hotter and more humid weather, and sometimes 10-hour boat rides between villages.

More than anything she struggled with a sense that the Indigenous people "didn't believe in God the way I do," Pedroso said.

Ahead of the webinar, he followed up with her and learned she was back in Mexico, having requested a transfer as the coronavirus pandemic broke out and after she felt "trapped in a daily routine" and that the work wasn't going as she had hoped. "And she genuinely looked happier and more relaxed," he said.

For Pedroso, his reporting showed the difficulties religious groups face when going into an unknown environment and the personal challenges a missionary may encounter in working with people who hold firmly to different beliefs.

"And missionaries often clash with that," he said. "They have to adapt, they have to mold and they have to find new ways to really do their work. Because if they're not flexible, they will bend and they'll break."

Challenges like those faced by Marta were part of discussions before and during the Amazon synod, held at the Vatican in October 2019. That gathering's final document, along with Pope Francis' reflection on its proceedings, Querida Amazonia, highlighted the importance Francis places on ministry at what he calls the "periphery." The Amazon Basin, which spans nine nations and represents one of the planet's most critical ecosystems, is such a place.

Participants at the synod spoke of the advance of evangelical churches in a region where Catholic parishes are so large that priests sometimes visit communities only once or twice a year, if that. The synod bishops in their document proposed the ordination of married men and the opening of the diaconate to women to help address that issue, though Francis did not address those topics in Querida Amazonia.

"A Church of Amazonian features," Francis wrote, "requires the stable presence of mature and lay leaders endowed with authority and familiar with the languages, cultures, spiritual experience and communal way of life in the different places, but also open to the multiplicity of gifts that the Holy Spirit bestows on every one." 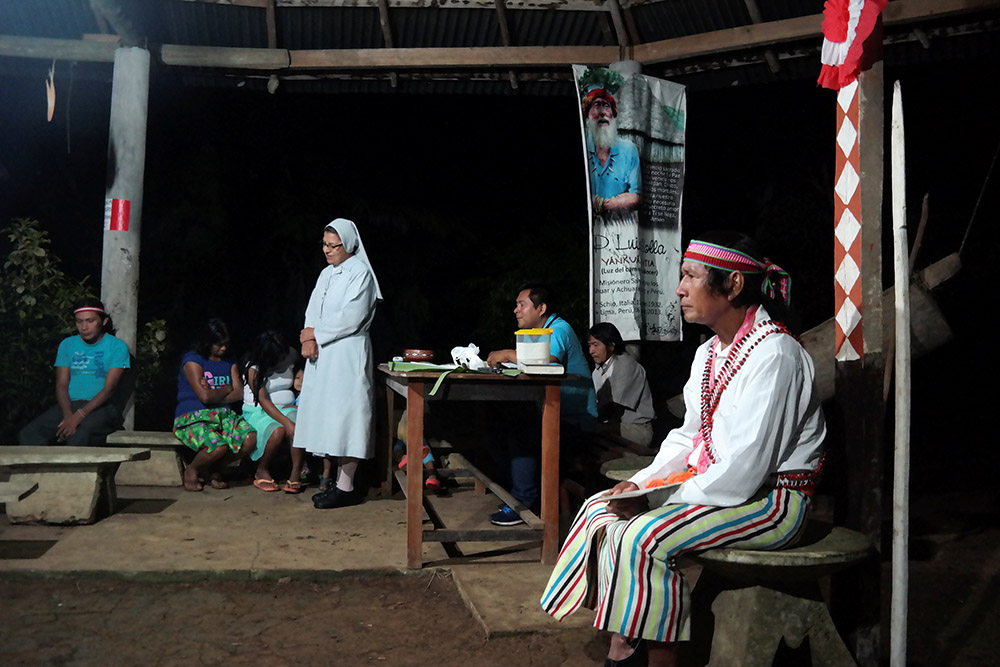 Deacon Shainkiam Yampik Wananch leads a liturgy with indigenous Achuar people at a chapel in Wijint, a village in the Peruvian Amazon, Aug. 20, 2019. (CNS/Reuters/Maria Cervantes)

Spelman, whose Austin, Texas-based Rainforest Partnership works with local communities in the western Amazon rainforest and other parts of Central and South America, said that openness is essential when working with Indigenous groups.

For religiously motivated people, she said, that means being cognizant of how they approach their ministry: "Are we imposing our views in a very colonial, old way that happened for millennia, or are we going and saying, 'Here's what we know, here's who we are, here's what you're doing, you who are living in the forest, in harmony with the forest'?"

The Pan-Amazon Church Network, or REPAM, has led efforts to strengthen ties between Indigenous groups and the Catholic Church in the region. Among the hundreds of listening sessions before the synod were some specifically with Indigenous people, and bishops and church organizations have taken a stand with indigenous communities against deforestation and extractive industries in the biome.

Spelman said it was important that missionaries and nongovernmental organizations go to the forest with humility, to invite rather than to impose, and with a willingness to learn as much as to impart.

Outsiders, for example, can learn from the ways in which some Indigenous communities have coped with COVID-19 using traditional medicine, she said. According to the United Nations, Indigenous peoples worldwide live in areas that are home to 80% of the world's biodiversity. 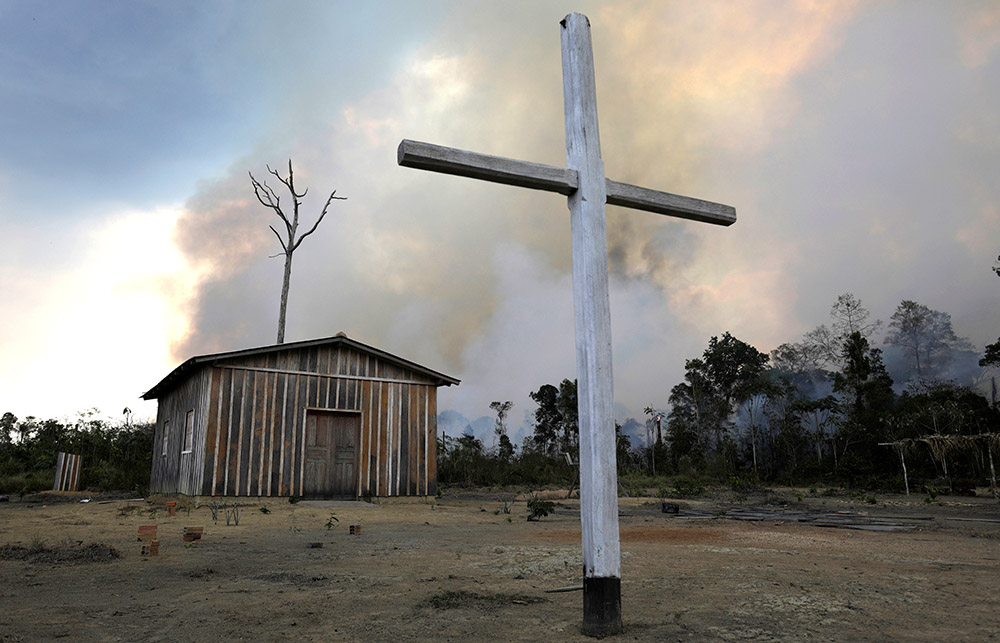 A wooden cross is seen in front of a Catholic church as a fire burns a tract of the Amazon jungle being cleared by loggers and farmers near Porto Velho, Brazil, Aug. 27, 2019. (CNS/Reuters/Ricardo Moraes)

"What do our forest communities know that they can teach us today that could change the trajectory of our shared future on this planet? And I think they have a lot to teach us, if only we're willing to ask and listen and respect," she said.

Spelman added that an important aspect to understand about Indigenous communities is that for many, the forest is not just their home, but is a part of who they are.

"When you go to church or any other [house of worship], people talk about feeling that connection to God, to this higher power. When you're in the forest, you feel that connection," she said.

Pedroso can speak to that personally.

He grew up Catholic in São Paolo, Brazil's largest city, where pollution caused "hideous" smells around its highways and contaminated its major rivers, the Tietê and Pinheiros.

"And no one questions that. It's just a normal part of the environment to live with two dead rivers in our backyard, because that's the price," he said, before adding, "We're starting to realize that's not OK, to live like that."

After living in the Amazon among Indigenous communities, Pedroso's perception of the world changed when he began to recognize how "everything is intertwined," from leaves and clouds to human beings and a drop of water, all made clearer in the rainforest.

"If you don't know how important it is to really respect a tree or a river or just a small being in your backyard, you can't respect bigger things," he said.