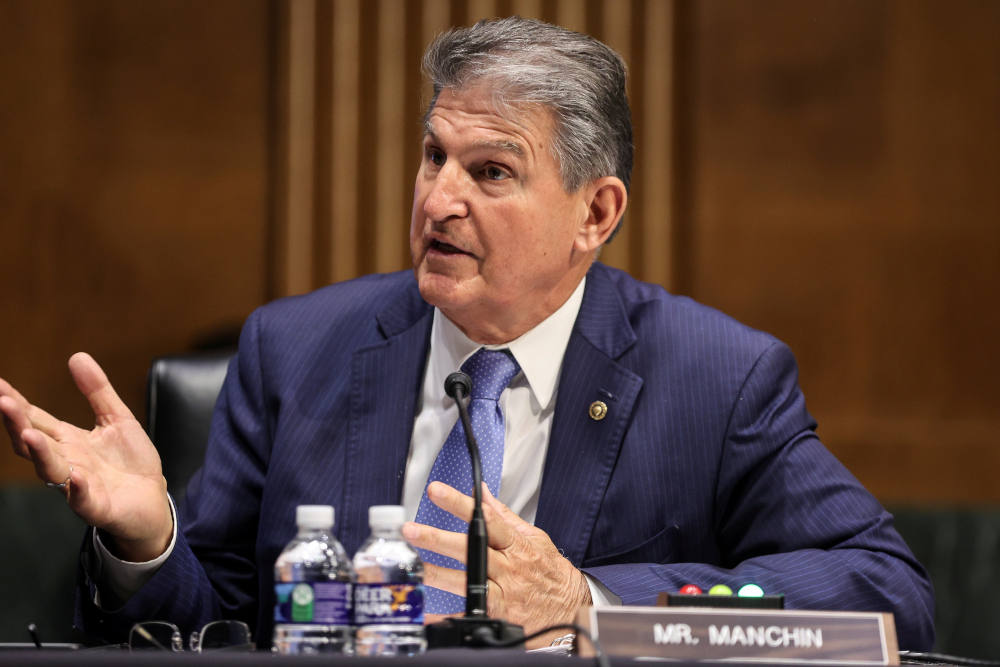 Days after U.S. Senator Joe Manchin announced his opposition to the president's nearly $2 trillion social and climate bill, several West Virginian faith leaders delivered a Christmas card asking he reconsider and salvage the Build Back Better Act, and with it the nation's largest-ever investments toward combating climate change.

Representatives of several state and national faith-based organizations appeared at the West Virginia senator's Charleston office Dec. 22 to present the poster-sized holiday card containing "a special prayer for this holy season: for your action to protect God's creation."

"There are a lot of provisions in Build Back Better that would benefit West Virginians, and we hope that he will reconsider and support that bill," Robin Blakeman, a Presbyterian pastor and part of the steering committee for West Virginia Interfaith Power & Light, a state chapter of the interreligious U.S. environmental network, told EarthBeat.

Blakeman and Donna Becher, a member of the creation care team at Blessed Sacrament Catholic Church, in Charleston, met Wednesday morning with Manchin's state director, Mara Boggs, who told them she would deliver the card to the senator at his home later that day. 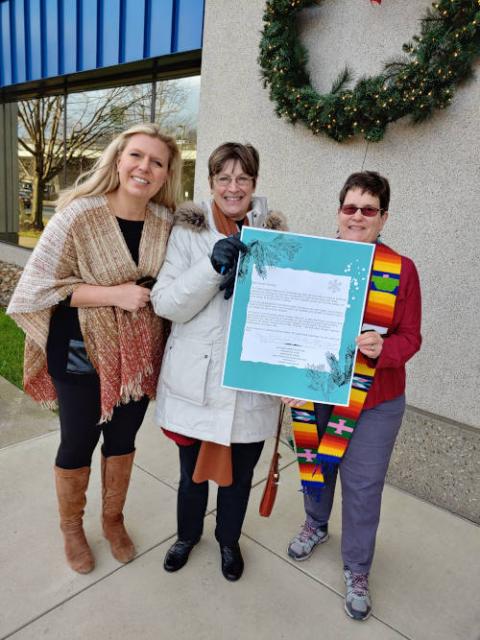 The faith groups' card to Manchin read in part, "As the days grow shorter, the nights longer, the days in the year fewer, we are keenly aware of the limited time to act to protect our greatest gift: the gift of Creation and a safe planet for all of God's children."

"We beg you this Christmas season, Senator Manchin, to give Americans, the world, and future generations the protection we need for our climate. By supporting the Build Back Better Act, you will bring hope and renewal into the lives of Americans — especially the lives of constituents in West Virginia — through clean energy, healthier communities and good jobs," the card stated.

The Christmas wish for legislative climate action comes days after Manchin, a Catholic moderate Democrat and key swing vote, announced he would not support the Build Back Better Act in its current form.

"The best gift we can give the younger generations gathered around our holiday tables is hope for a bright future free from environmental degradation and the harms of the climate crisis," Marianne Comfort, the Mercy Sisters' justice coordinator for Earth, anti-racism and women, said in a statement.

The Build Back Better Act, passed by the House of Representatives in November, represents the backbone of President Joe Biden's domestic agenda, spreading out nearly $2 trillion in spending over 10 years to address a wide range of social issues, such as expanding childcare and Medicare, lowering prescription drug costs and addressing immigration, as well as taking on climate change.

The bill includes $555 billion in climate measures such as tax credits for solar installation, electric vehicle purchases, building energy efficiency upgrades and the creation of a Civilian Climate Corps. It also seeks to establish a fee on methane emissions, provides funding for wildfire prevention, drought relief and other conservation projects, and directs dollars toward tribal, rural and historically disadvantaged communities impacted by pollution and global warming.

Of special importance to many West Virginians is a key fee extension requiring coal companies to fund benefits for workers with black lung disease. That element, along with incentives for companies to build near coalfields and penalties for union-blocking actions, led the United Miner Workers of America — the nation's largest coal miner union — to support the Build Back Better Act. On Dec. 20, the union called on Manchin to reconsider his opposition.

"There's a lot being said in West Virginia about the fact that black lung benefits will decrease or go away if Build Back Better isn't passed," Blakeman told EarthBeat.

Together, the bill's climate measures form the central plank in fulfilling the new U.S. commitment under the Paris Agreement to cut national emissions in half by 2030, and is seen globally as critical not only in limiting global warming but reestablishing U.S. credibility on addressing climate change during a decade critical in holding average temperature rise to 1.5 degrees Celsius.

Manchin, whose ties to the fossil fuel industry have come under increasing scrutiny, sent the fate of Biden's domestic legislative agenda into uncertainty during an appearance on "Fox News Sunday" Dec. 19 where he declared he was "a no" on the current version of the Build Back Better Act. He later released a statement expanding on his critiques of the bill, questioning its size and total cost if all programs are extended, and on its climate provisions, re-raising concerns they would jeopardize the electric grid's reliability.

Blakeman and Becher have both participated in meetings with Manchin's staff throughout the summer, and expressed disappointment with their senator's opposition to the bill. Blakeman told EarthBeat she disagreed with Manchin's belief that current efforts by utility companies to switch to renewable energy negated the need for incentives in the bill to speed up the transition.

"It's a little disingenuous, I think, to say that that's enough to combat climate change. We can't continue on the course that we're on right now and expect to have a livable future for our grandchildren. That's just the plain truth," Blakeman said.

In her conversations with the senator's staff, Becher has framed her support of the bill in themes from Pope Francis' encyclical "Laudato Si', on Care for Our Common Home," including that addressing environmental issues cannot happen without also addressing social challenges.

"We're all connected and we are stewards of the Earth, and you can't pull out any little piece of something and have the whole work in synchronicity," Becher told EarthBeat. "And so care for the environment is also … for me care for the poor and the marginalized who suffer the brunt of the West Virginia flooding or the hurricanes in the lower parts of New Orleans."

Blakeman added she's emphasized the ways West Virginia is particularly vulnerable to climate change — from being most at risk from increased flooding, to ice storms in February in her hometown of Huntington that left some without power for weeks — but also how West Virginians stand to benefit from the bill's energy efficiency incentives, child tax credit extensions and other measures.

Manchin's office did not immediately respond to a request for comment about the delivery of the Christmas card. 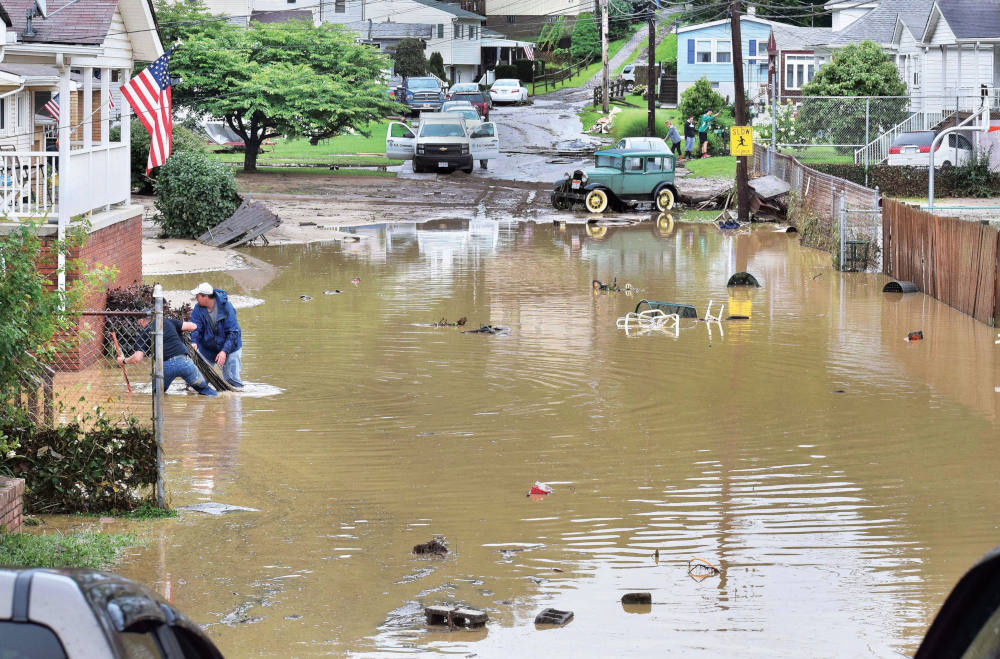 Men clear debris after flooding July 29, 2017, in McMechen, W.Va. As many as 400 homes and businesses in Marshall County sustained water damage. The worst of it was in McMechen, where runoff flowed down the hillside and flooded the town. (CNS photo/Scott McCloskey, courtesy of the Wheeling News-Register)

The West Virginia senator joined his fellow Senate Democrats on an evening call Dec. 21 to discuss the future of the legislation. Earlier in the day, Biden told reporters: "Senator Manchin and I are going to get something done."

Already the focus of intense lobbying throughout the summer, Manchin has only seen heightened attention since voicing his opposition.

The Poor People's Campaign, led by Protestant Bishop William Barber II and the Rev. Liz Theoharris, have planned a rally on Christmas Eve aimed at pressuring Manchin and Republicans to support policies in the Build Back Better Act and other legislation that they say can improve the lives of 140 million poor and low-wealth Americans.

"The continued erosion of the Build Back Better agenda and the dismantling of voting rights protections across the country this year have revealed a dangerous and immoral political philosophy that assumes there is no room in the democracy for the poor and low wage worker, the immigrant, the sick, and all those in need. But this is a lie," the Poor People's Campaign said in a Dec. 20 statement.

Blakeman told EarthBeat she intends to follow up on an offer made at the Christmas card delivery to meet with Manchin's office after the holidays. She added she hoped Manchin might attend, as well.

"It would be nice if we could have a meeting directly with the senator. We are his constituents," she said.