What is the relationship between the military and the environment? 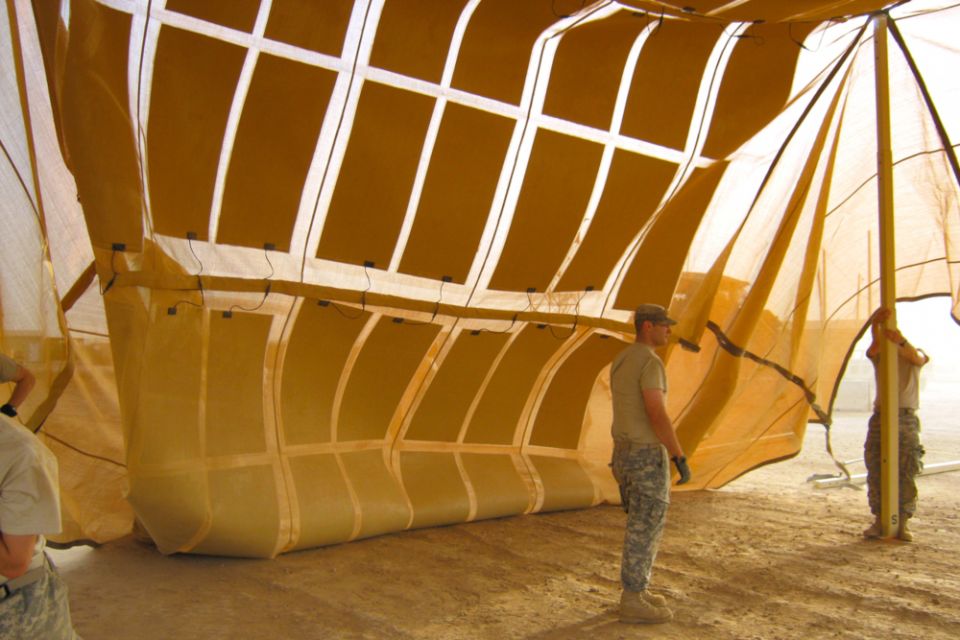 Durable and flexible solar shade panels ready for deployment. The U.S. military has been expanding its renewable energy for years now because of the danger transporting fossil fuels in combat zones. (Wikimedia Commons/US Army Africa)

This week's Burning Question comes from EarthBeat reader David Buller. He asks: What is the relationship between the military and environmental damage?

Before we jump in, let's start with a disclaimer. This is a big question about a giant institution and a complicated issue. Consider this article a primer on the topic.

Does the military even think about the environment?

Yes, quite a bit actually.

As recently as last year, in 2019, the Defense Department released a report that two-thirds of the U.S. military's installations were threatened by flooding, drought and wildfires driven by climate change. The report added that these estimates are likely to worsen over time.

These are not new revelations. The U.S. military has been planning for climate change since at least 1990 when the Navy recognized the "impacts posed by these changes in environment are significant enough to warrant serious examination."

In 2014, during the Obama administration, serious examination amounted to a major Pentagon report called the Climate Change Adaptation Roadmap. The Roadmap made headlines for asserting that climate change is a major national security threat that needs to be incorporated into broader strategic thinking. The report called climate change a "threat multiplier" because of its "potential to exacerbate many of the challenges we are dealing with today – from infectious disease to terrorism."

Okay, so what are they doing about it?

This is where things start to get tricky.

In terms of adapting its own infrastructure, the military has done a whole lot. But that doesn't mean everyone has been satisfied.

According to Politico, while the 2019 report on installations acknowledged the current threats that climate change poses, Democrats in Congress were upset that it lacked specifics on things like mitigation plans and cost estimates to upgrade instillations.

In terms of mitigating climate change itself, the military has gone to great lengths to cut its fossil fuel use and move toward renewable energy. In 2007, President George W. Bush signed a law requiring the Pentagon to get 25 percent of the electricity for its buildings from renewable energy by 2025, a goal it seems to be on target to hit.

However, as Reuters puts it, "The reasons have nothing to do with the white-hot debate over climate change." It's about protecting soldiers. Convoys delivering fuel to U.S. bases can be highly vulnerable to attacks by enemy combatants. Renewable energy reduces the need for such convoys and, thus, helps save lives.

Nevertheless, the military's move to renewables could still turn out to play an important role in the ongoing climate debate. Sarah Light, a business ethics professor at the University of Pennsylvania's Wharton School of Business, argues that the military's expanded use of renewable energy could possibly affect individual behavior in the climate change arena. "The mere fact that the Department of Defense is using solar panels has the potential to drive individuals to want to use solar panels – at least, that's the hypothesis," she said.

Along those lines, by asserting the harsh reality of climate change, the military could also make clear to denialists that the time for scientific debate has come and gone, and that action is now necessary.

How has the military actually impacted the environment though?

Let's be clear here. The military has an extensive history of damaging the environment, both at home and abroad. For our purposes, let's separate the impacts into three general categories: greenhouse gas emissions, toxic pollutants and war-related impacts.

In 2017 alone, the U.S. military released roughly 59 million metric tons of carbon dioxide and other greenhouse gases into the atmosphere, according to a study by Brown University. If it were a country, this would rank the Pentagon as the 55th largest contributor of greenhouse gas emissions in the world, putting it ahead of industrialized countries like Sweden and Portugal.

About 70 percent of its energy consumption was for using and moving troops and weapons.

"Indeed, the Department of Defense is the world's largest institutional user of petroleum and correspondingly, the single largest producer of greenhouse gases in the world," the Brown report states.

This is a big one.

A 2002 study by the National Cancer Institute and the Center for Disease Control found that any person who has lived in the United States since 1951 has been exposed to radioactive fallout from the more than 500 nuclear weapons tests performed worldwide prior to the 1970s.

Native Americans have paid a particularly high price for nuclear weapons manufacturing and testing. In the Navajo Nation, for example, cancer rates doubled from the 1970s to the 1990s because of uranium mining and weapons testing in the southwestern U.S., according to Public Radio International. These aren't merely issues of the past. There are currently more than 160,000 abandoned uranium mines in the United States, and thousands of those still pollute nearby water supplies. 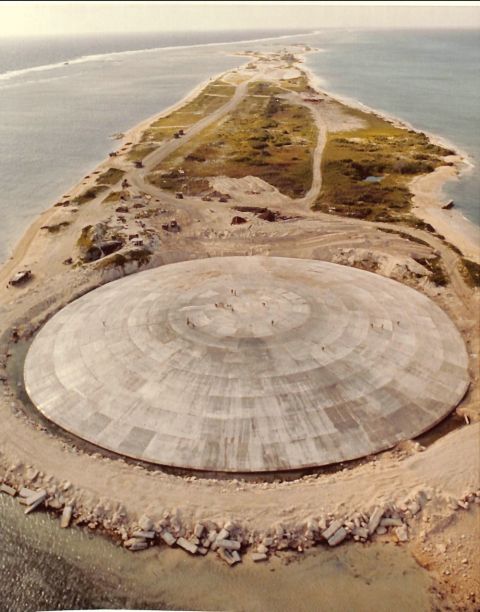 The Runit Dome was constructed in 1979 to cover 111,000 cubic yards of radioactive debris created from 12 years of nuclear tests in the Marshall Islands. (Wikimedia Commons/US Defense Special Weapons Agency)

And in the Marshall Islands, an 18-inch concrete cap covering 111,000 cubic yards of radioactive debris from U.S. nuclear testing is in danger of leaking into the ocean because of rising sea levels.

Military toxic pollution has hurt American soldiers as well. In 2014, Newsweek reported that the Pentagon's environmental programs were dealing with 39,000 contaminated sites around the country, including 141 Superfund sites that qualify for long-term cleanup grants from the federal government. Soldiers at bases like Camp Lejeune in North Carolina drank contaminated water for years, leading to many deaths and illnesses. The late Michigan congressman John Dingell put it bluntly: "Almost every military site in this country is seriously contaminated."

Looking just at the recent wars in Iraq, Afghanistan and Pakistan alone, Brown University's Costs of War project found degradation of multiple natural resources. This includes contaminated water in war zones by oil from military vehicles and deforestation in Afghanistan as a result of illegal logging by warlords.

Military activity has also contributed to extreme desertification in Iraq, according to the United Nations.

In 2008, the Rand Corporation found that, at least in the U.S. Army, environmental considerations rarely received high priority because they competed with other warfighting concerns. The study pointed out that putting such low priority on the environmental consequences of actions creates missed opportunities for the military to make strategic use of environmental issues. Poor environmental conditions can also lead to further instability during post-conflict operations.

The military has a long history of committing environmental damage, and the Pentagon continues to be one of the largest emitters of greenhouse gases in the world. But while there is plenty of room for further improvement, the Defense Department's strides towards renewables and its statements about the reality of climate change can make a big difference in mitigating further environmental degradation.

Where can I learn more about environmental racism?

What is ecological sin?

EarthBeat | What is the relationship between the military and the environment?