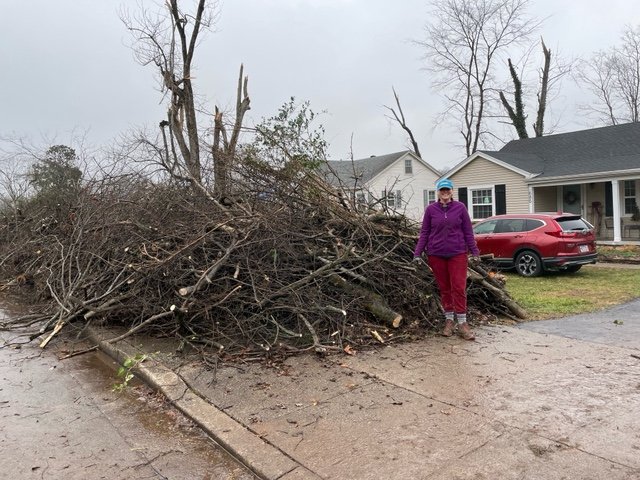 This is how it is for tornado victims right now and will be for a while since an outbreak of historic twisters late Dec. 10 and early Dec. 11 changed countless people's lives forever in Western Kentucky and several other states and sadly ended the lives of many others.

As of Dec. 19, at least 78 people were confirmed dead in Kentucky. Elsewhere, Illinois has confirmed six fatalities, while at least four people were killed in Tennessee, two in Arkansas and two in Missouri.

"As we prepare to celebrate the birth of Christ, think of how different this Christmas will be for those who have lost so much," said Bishop John E. Stowe of Lexington, Kentucky, in the eastern part of the state.

"We have all been profoundly saddened by the tornadoes that swept through our commonwealth on Dec. 10, but especially the Diocese of Owensboro, which covers the western portion of Kentucky," he said in a statement.

Several residents of Bowling Green, Kentucky, spoke to Catholic News Service about their losses, blessings and hopes for rebuilding. The Warren County area saw over 500 homes and 100 businesses suffer either total or severe damage from the storms.

Father Ryan Harpole, pastor of St. Joseph Catholic Church in Bowling Green, which is in the Owensboro Diocese, said he was at a meeting of church leaders and the faithful a week earlier, with Owensboro Bishop William F. Medley present.

"He came (here) to see all of the pastors and parishioners; all of those who were in the path of the storm that I, too, am concerned about," said Father Harpole.

According to the pastor, St. Joseph's has 3,000 registered members on its rolls, with a thousand of that number regularly active in their parish.

The church was founded in 1859 and was added to the National Register of Historic Places in 1975.

"As a whole, we did not suffer a lot of damage and while those who did were in the minority, there are people we know who lost everything," said Father Harpole.

He also noted that while one woman had a tree fall on her house, "over here (at the parish) our electric power never even flickered, and we are very close to Western Kentucky University," which did suffer damage and had to reschedule its Dec. 11 commencement ceremonies.

Relief donations, said Father Harpole, "are coming in through the diocese, and we distribute the aid as people need it, and we will help anyone who needs the aid."

As far as how help from insurance companies figures in, the priest said, "I haven't any knowledge of people getting a check yet, but then I am not in the business so naturally would not know anything."

"What I can say, however, is that some people are going to be out of money they don't have; they will pay, for example, to replace missing roof tiles because their insurer will not replace a whole roof," said Father Harpole.

Just a couple of days after the tornadoes hit, State Farm Insurance Co. said it had already received more than 1,000 claims filed by its clients in Kentucky alone.

One homeowner who believes she is somewhat fortunate is Anita ("Annie") Adams, who lost, she said, "20 trees on my property, but I still see us (her mother lives next door) as being in pretty good shape."

Apparently some animals are OK too — many were lost in the storm — but Adams told CNS "we have had some success with a cat that was missing but came back, and several dogs have also returned."

Her neighborhood, said Adams, "is an old, established one, about 1.6 miles from St. Joseph's and centrally located in the middle of town."

Adams added that "by going online we have all been able to match up through the city government what our needs (requests) are with the volunteers that are available to do a certain task."

Where insurance coverage is an issue, she told CNS, "I have talked to a desk person and an adjustor has come out to see me but what they'll pay for is a mixed bag."

"Mixed" meaning trees that did not hit the homeowner's house, for example, are not covered for removal, and Adams must cover her $1,000 deductible, in addition to paying for any additional tree removal.

On the plus side, however, said Adams, "I already had my Christmas shopping done, we did not lose our electricity, and supermarkets — for the most part — are providing food to the community."

However, she noted that "the inventory today (Dec. 19) was rather slim in terms of the essentials."

More important to her recovery, said Adams, "is my need to refocus on Jesus in Christmas, despite all that is going on, to move him from the back of my mind to the front."

Before the tornadoes, Durbin's property had two dozen trees and a privacy fence on it — but now just four trees remain standing and the fence is gone.

"The insurance people will pay 90% to repair the damage my property suffered — I pay the remaining 10% — and I did hear from an adjustor three days after the storms first hit," said Durbin.

"Every house around here was hit — some worse than others — but we had no deaths, and you can see by the photos how the downed tree roots tower 5 to 6 feet over our heads," said Durbin.

He singled out the different power companies for praise, noting that "although we don't have any power back on yet — and have seven telephone poles down — they have been just great."

According to news reports, a total of 34 confirmed tornados swarmed across eight states Dec. 10-11. One tornado that hit the night of Dec. 10 had an approximate 227-mile-long path of destruction spanning four states, with 200 miles of destruction in Kentucky alone.

Assistance can include grants for temporary housing and home repairs, low-cost loans to cover uninsured property losses, and other programs to help individuals and business owners recover from the effects of the tornadoes.

The total cost of the damage and economic loss the impacted states face has been estimated at $18 billion, which includes damage to home and businesses as well as their contents; cars; job and wage losses; and infrastructure damage.