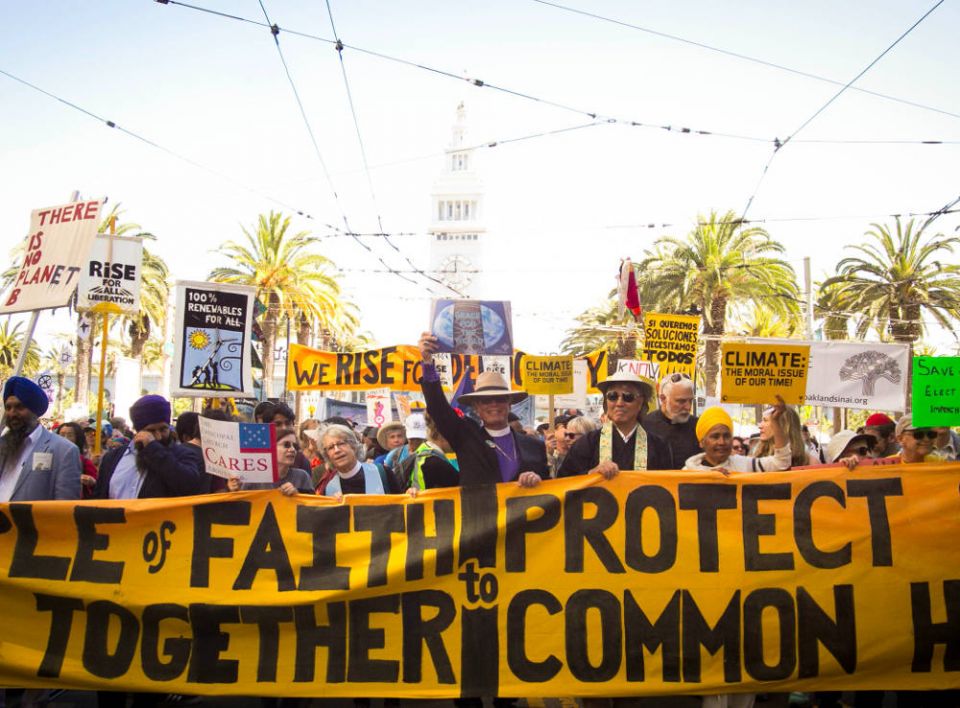 Faith leaders join a "Rise for Climate" demonstration Sept. 8 in San Francisco ahead of the opening of the Global Climate Action Summit. The summit will showcase actions taken to date by cities, regions, businesses and organizations to address climate change and meet the goals of the 2015 Paris Agreement. (GreenFaith)

In an effort to move beyond promises and pledges, leaders from around the world have joined the faith community and others this week in San Francisco to put on display actions under way to address the global threat of climate change, and to mobilize even more.

The three-day Global Climate Action Summit officially opened Sept. 12, and is expected to draw more than 4,000 delegates to the Bay Area. Its primary focus is showcasing the steps taken so far toward fulfilling the goals of the 2015 Paris Agreement. Under that accord, 195 nations committed to limit average global temperature rise "well below" 2 degrees Celsius (3.6 degrees Fahrenheit), and as low as 1.5 C (2.7 F).

While the summit, hosted by California Gov. Jerry Brown, will highlight achievements to date in implementing the Paris Agreement — announcements of progress and new commitments to reduce greenhouse gas emissions by cities, regions, organizations and companies are expected throughout the three days — it also aims to push the global community to "take ambition to the next level," the gathering's theme.

As it stands, the world is lagging behind in its climate commitments.

Scientists have estimated the planet has already warmed 1 C since the late 19th century and that the initial national pledges under the Paris accord will yield an overall temperature rise of 3 C by the end of the century. In addition, few countries are on track to meet their commitments, and funding for the Green Climate Fund, to assist developing nations in implementing climate mitigation efforts, has been slow to materialize.

The next round of United Nations climate talks, in Katowice, Poland, in December, will serve as the first official stock take of global progress.

"Climate change is the defining issue of our time, and we are at a defining moment," António Guterres, U.N. Secretary General, said in a speech Monday at U.N. headquarters in New York. He added that if the world doesn't change course by 2020, "we risk missing the point where we can avoid runaway climate change."

Ahead of the San Francisco climate summit's opening, environmental activists staged a series of demonstrations around the world to demand governments commit to 100-percent renewable energy and to leave fossil fuel reserves in the ground. The faith community played an active role, joining some of the estimated 900 actions in Indonesia, Australia, Nigeria and San Francisco.

"God has made the earth green and beautiful. And there is no greater threat to our 'green and beautiful' earth than the more frequent and intense droughts, floods, storms and wildfire brought by climate change, which knows no barrier," said Nana Firman, co-founder of the Global Muslim Climate Network.

The summit comes in the middle of the Season of Creation, a month-long observation among Christians of prayer and celebration for God's gift of creation and humanity's duty to care for it.

On Wednesday afternoon, a multi-faith service in San Francisco's Grace Cathedral, to be live-streamed, will feature messages from the Dalai Lama and Ecumenical Patriarch Bartholomew. It will also call on people of faith to commit to a sustainable lifestyle, through adopting renewable energy use and plant-based diets at home, and using sustainable transportation.

Earlier in the day, Catholic Climate Covenant executive director Dan Misleh highlighted actions taken by the U.S. Catholic Church at a forum hosted by We Are Still In — a coalition of 3,500 U.S. governors, mayors and other leaders who have promised to fulfill the U.S. commitment under the Paris Agreement despite President Donald Trump's decision to withdraw the country from the deal at the earliest opportunity. 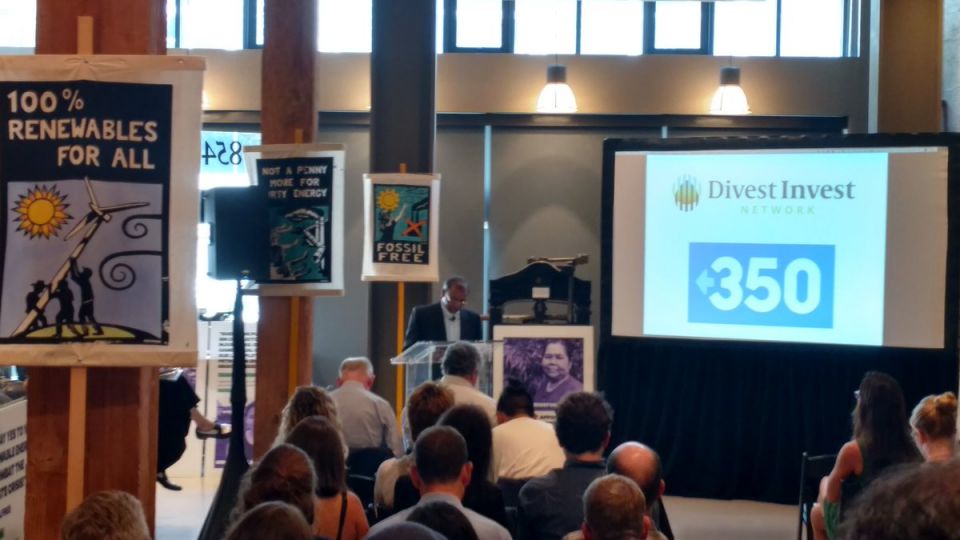 "Catholics are still in. We still are in to care with you for our common home, our children, our vulnerable neighbors and our shared future," Misleh said.

In April, the Covenant launched a parallel "Catholics Are Still In" campaign, which as of Sept. 10 has garnered 760 institutions to sign onto the Catholic Climate Declaration expressing the U.S. Catholic community's commitment to climate action. The signatories include 43 archdioceses and dioceses, 71 colleges and universities, nearly 250 religious communities, more than 150 parishes and more than a dozen healthcare systems.

In his comments at the We Are Still In forum, Misleh noted that Catholic institutions represent one-fifth of all those in the campaign. He added the Catholics Are Still In effort "adds a distinctively moral voice to the wider WASI campaign," and called it an "abdication" of responsibility and moral leadership for the U.S. to exit the Paris Agreement.

Another event, set for Friday at the University of San Francisco, will further highlight what Catholics have done to reduce their environmental footprint and what steps they can take next. A portion will be live-streamed.

Two days before the climate action summit's official kickoff, 19 Catholic institutions announced intentions to divest their financial resources from fossil fuels. With that latest joint divestment declaration, 122 Catholic organizations and religious communities have now publicly made the pledge to divest, according to Global Catholic Climate Movement, which has catalyzed much of the church's divestment push in the past two years.

Among the latest is Caritas India, which continues to recover from devastating flooding in Kerala, a southwestern Indian state, that has killed more than 400 people and displaced nearly 1.3 million more.

Bishop Lumen Monteiro, chairman of Caritas India, said in a statement said it will take "a long time to overcome this tragedy." He added that the world's second-most populous country has witnessed an increase of extreme climate events like the flooding in Kerala over the past decade, and that climate change has "negatively impacted" its people, particularly the poor and marginalized.

"At Caritas India our mission is to bring the gospel's love and compassion to people who need it, and to do that we must step away from the fossil fuels that cause so much suffering," Monteiro said. 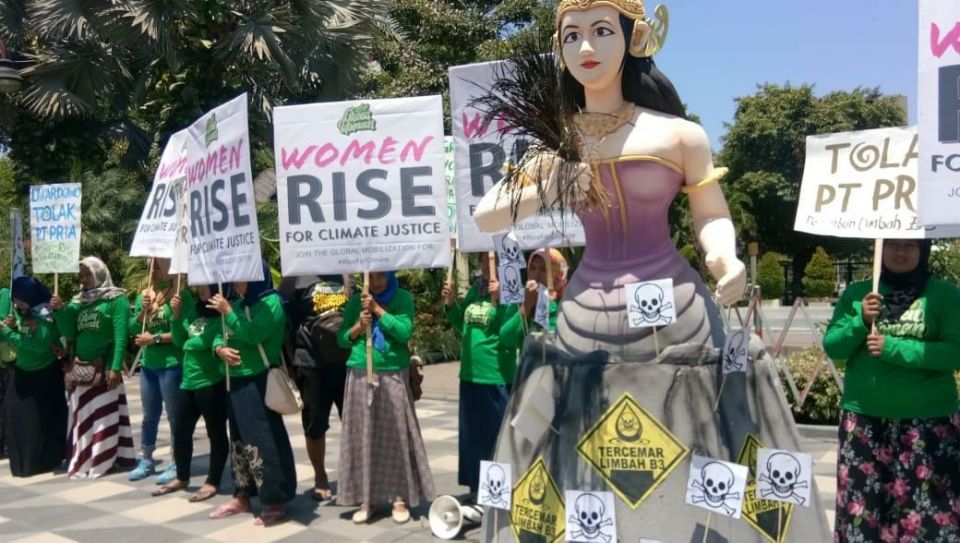 At the press conference, Fr. Paul Moonjely, Caritas India executive director, called upon other faith groups and institutions "to divest and engage in creating a new world. A world not of exploitation but compassion."

The event, organized by the Divest-Invest Network, highlighted the divestment movement's progress to date: 985 institutions, with faith-based organizations the leading segment, at 29 percent, having divested an estimated $6.24 trillion. In an op-ed in the Guardian Sept. 10, the mayors of New York and London challenged other cities to join them in divesting from fossil fuel companies.

In terms of U.S. efforts, a report released Sept. 11 indicated the country is "almost halfway" to meeting its original target under the Paris Agreement of reducing emissions by 26 to 28 percent below 2005 levels by 2025. Current policies, combined with market forces, could result in a 17-percent emissions reduction by 2025, it added, with implementation of "readily available" measures driving the emissions reduction to 21 percent. The "Fulfilling America's Pledge" report also offered a roadmap to reducing emissions by at least 80 percent by 2050.

Critics, including Pope Francis, have routinely argued that the U.S. and other industrialized nations should bear the brunt of efforts to reduce emissions, as the largest sources of the historical buildup of greenhouse gases in the atmosphere.

Kim Pozniak, a spokesperson for Catholic Relief Services, applauded the U.N. secretary general for "sounding the alarm about climate change in front of a global audience." She said CRS in its work across the world has seen how a changing climate has brought harsh conditions and suffering on people, ironically, she added, those who have contributed the least to the problem.

"We’ve seen farmers lose their crops due to erratic rainfall, extremely hot temperatures and prolonged drought. We’ve seen families struggle to keep their homes as the water around them rises. We’ve seen entire communities washed away by flash floods and landslides," she said.

Federal steps on climate change in the U.S. have taken a demonstrable step back under Trump, who has made deregulating environmental protections a primary piece of his presidency.

The Environmental Protection Agency finalized a proposal this week to weaken regulations on methane, a potent greenhouse gas. That rollback of methane regulations, along with another expected from the Interior Department, follows other steps by the Trump administration in the past month to freeze emissions standards for vehicles, and to weaken regulations on carbon pollution from coal-fired power plants.

Brown, the California governor who is Catholic, has been a leading critic of Trump's environmental policies, and has been a key player in galvanizing U.S. climate action at other levels of society.

On Monday, he signed into law a landmark bill that commits California — the world's fifth-largest economy — to a carbon-free electricity grid by 2045. In addition, an executive order directs the state to become carbon neutral by that same time, while separate legislation signed last week blocks federal oil drilling expansion along the state's coasts and its public lands.

"This bill and the executive order put California on a path to meet the goals of Paris and beyond. It will not be easy. It will not be immediate. But it must be done," Brown said at the signing in the state's capitol.