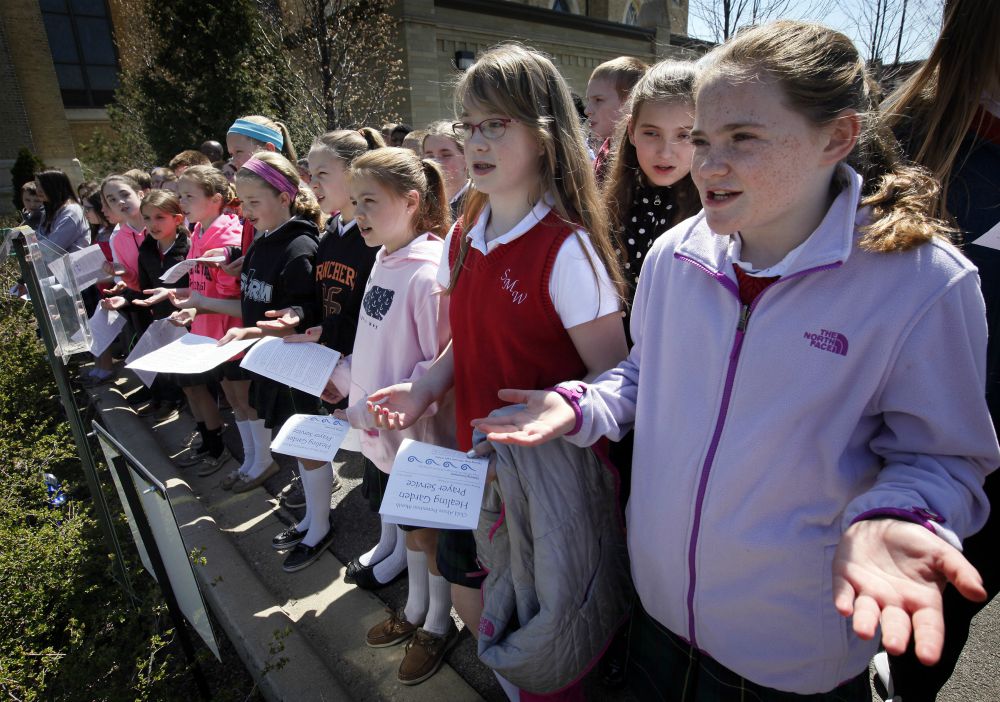 Students from St. Mary of the Woods School pray during a service in observance of National Child Abuse Prevention month in Chicago, April 15, 2016. In June 2015, Pope Francis approved the outline of a new system of accountability for Catholic bishops who do not appropriately handle accusations of clergy sexual abuse. (CNS/Catholic New World/Karen Callaway)

A particularly heart-freezing detail emerges in a 60-year-old man's account of how he was abused as a boy by then-Fr. Theodore McCarrick.

As described in a July 19 story in The New York Times: "The connection between Father McCarrick and James's family was deep." James' uncle had been McCarrick's best friend in high school, and the young priest grew up with the family sharing meals and free time with the family. That intimacy was reinforced sacramentally. "James," the Times records, "was baptized by Father McCarrick on June 15, 1958, two weeks after he was ordained as a priest."

"It was explained to us how Jimmy was special to Father McCarrick, because of that very special thing that happened, that he was his first baptism," the man's sister told the Times. James had told Karen and his other siblings of the abuse only days before. James had kept silent for some 40 years.

To fully grasp the sense of betrayal ordinary Catholics feel toward their hierarchy, you must fully grasp the horror of this detail: James was abused by the man who baptized him. The man who stood in persona Christi at the baptismal font, at the family dining table, around the backyard family pool, abused a child of God.

That fact that this same man would rise to the highest ranks of the Catholic Church only heightens the sense of betrayal. It is the anguish felt at the knowledge of this betrayal that caused Cardinal Joseph Ratizinger, on verge of becoming Pope Benedict XVI, to cry out against the "filth" in the church. On Good Friday 2005, in the Colosseum at the Ninth Station of the Cross, when Jesus fell the third time, Ratzinger prayed:

Think of how much Christ suffers in his own Church … How often is the holy sacrament of his Presence abused, how often must he enter empty and evil hearts!… How often is his Word twisted and misused! What little faith is present behind so many theories, so many empty words!

How much filth there is in the Church, and even among those who, in the priesthood, ought to belong entirely to him! How much pride, how much self-complacency! … The soiled garments and face of your Church throw us into confusion. Yet it is we ourselves who have soiled them! It is we who betray you time and time again, after all our lofty words and grand gestures.

NCR has reported and commented in recent editorials about the progress the Catholic Church has made in addressing the decades-long scandal of the sexual abuse of minors by clergy. The McCarrick case shows in vivid detail where the church continues to fail and what it must do to purge itself of this contamination.

The McCarrick case does not just indict a single individual, it indicts the full structure of the Catholic Church that has enabled this outrage to continue for so long.

To demonstrate the seriousness of his offenses, McCarrick should be removed from the College of Cardinals. His advanced age and already retired status would mean his removal from the college would be largely symbolic, but it would be powerful symbol.

McCarrick, as an archbishop and a cardinal, is not bound by the same norms that govern abuse perpetuated by other clerics. A priest or deacon with a substantiated allegation against him would be removed from the clerical state. McCarrick should face the same fate. To allow McCarrick to lead a private life of prayer and penance is not justice. We repeat again our call for Pope Francis to establish and seat the tribunal he authorized three years ago that would hold bishops responsible for "abuse of office." 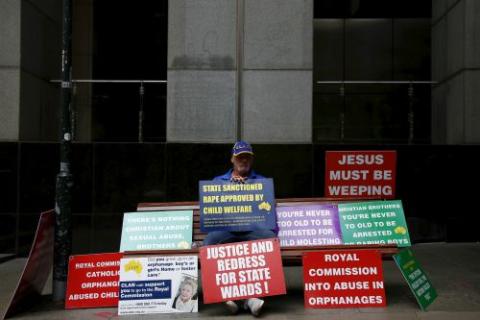 Abuse survivor Darren Chalmers sits on a bench with numerous placards outside the venue for Australia's Royal Commission Into Institutional Responses to Child Sexual Abuse in Sydney March 1, 2016. (CNS/Reuters/David Gray)

Removing McCarrick from his office as cardinal and from the clerical state suitably addresses the individual at the heart of this case, but it doesn't address the deeper issues.

Catholics understand behavioral problems, mental illness, sexual sin — we understand humanity that fails. To this point in time, the church has focused on the actual sickness of the abusers. The response has been modeled after and invokes civil law to punish the offender with jail time and expulsion from the community. Settlements and monetary liabilities are paid out. We support all these actions as appropriate and necessary.

The secondary crime, which can't be dealt with in a civil court or bought off with insurance money, is the betrayal of the community by its leaders. Addressing the betrayal of community will take more than revised charters and canon laws.

The McCarrick case shows how this betrayal happens at the sacramental level: Bishops who hid the crimes against children or who through intention or neglect enabled the crimes to remain hidden distorted the community's understanding of God, of God's presence in the community that we believe, according to our sacramental theology, infuses everything and everyone.

What must happen is a deep examination of conscience by all who have held power in the church these last 40 years when the abuse crisis began to emerge in the church.

What must happen is a deep examination of conscience by all who have held power in the church these last 40 years when the abuse crisis began to emerge in the church. We need to know, and they need to tell us what they knew, what they tolerated and what they were silent about. Full truth telling is needed so healing can happen.

The U.S. church needs a process similar to Australia's Royal Commission Into Institutional Responses to Child Sexual Abuse or the examination Chile went through under the specially appointed papal delegate Archbishop Charles Scicluna.

The only way we can see this happening is by submitting the U.S. church to a thorough examination by a Vatican-appointed apostolic visitation. The team would have the authority to review all documentation at all levels of the church, to take testimony in parishes and chanceries throughout the country and to visit every seminary, house of studies and formation program in the country. Church authorities would have to free victims bound by past non-disclosure agreements to speak freely to the visitation team.

Participation would have to be mandatory for all — unlike the self-reported audits of the Dallas Charter. The work of the visitation would have to be transparent and results made public at the end of its investigation. We would expect — like in Chile — for resignations to follow, but more than that, we would expect to see a public penance service.

When our church leadership has publicly acknowledged — in the anguished tones Ratizinger modeled — its collective complacency in the abuse of its children, then can we move forward saved and sanctified.

Then we would hope to see a cleansing of the temple, a true reckoning of the bishops with the people that would enable all of us to walk to the future together in community.

Related: Francis approves process of accountability for bishops on sexual abuse
A version of this story appeared in the Aug 10-23, 2018 print issue under the headline: Church must address betrayal in abuse.