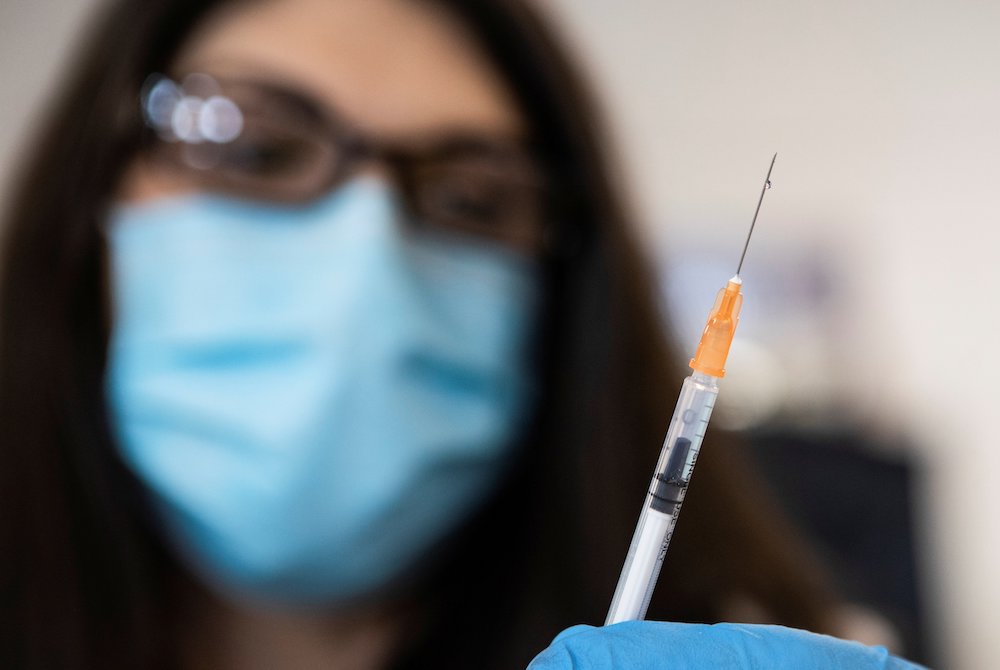 A nurse in Richmond, Virginia, readies a syringe with the COVID-19 vaccine at the Richmond Raceway complex March 4, 2021. (CNS/Reuters/Julia Rendleman)

A press release from the U.S. Conference of Catholic Bishops rarely makes national news, but in the past two months our church leaders have managed to garner headlines not once, but twice. Unfortunately, in both instances, the notoriety came because the bishops' comments were tone deaf and, frankly, ridiculous.

The first, of course, was the Inauguration Day statement from the bishops' conference president, Los Angeles Archbishop José Gomez, who apparently thought the first day of Joe Biden's presidency was the best time to outline disagreements over policy that Gomez believes "would advance moral evils."

In the aftermath of that statement, so much controversy and negative PR ensued that the working group that drafted it has since been disbanded.

Confusing at best, the statement said that the J&J vaccine was both morally acceptable and morally concerning, and suggested that Catholics instead opt for the Pfizer or Moderna shots, if they have a choice — hardly the case when most Americans are still playing "Hunger Games"-like roulette just to get a vaccination appointment.

So many Catholic ethicists, moral theologians, commentators and even bishops have since disputed the reasoning in the "anti-vax" statement — and similar ones from the New Orleans Archdiocese and the Diocese of Bismarck, North Dakota — that even The Washington Post had to do an explainer on the barrage of varying opinions. (Note: When even the right-leaning Ethics and Public Policy Center disagrees with you, the bishops should know they're in trouble.)

The unifying, underlying concern from both of these problematic statements? Not surprisingly: abortion.

With the vaccines, it's the use of abortion-derived fetal cell lines in the testing of and, in the case of the J&J and AstraZeneca ones, the production of the vaccine, which caused some bishops to urge as much moral distance as possible between the abortion done in the 1970s and the shot in your arm.

Never mind that none of the vaccines actually contains any fetal cells.

Never mind that the cell line is so commonly used in testing that, according to a statement from a number of conservative Catholic pro-life activists, "the great majority of processed/packaged food products available for sale in the United States are likely to contain ingredients produced or tested" with it.

And, never mind that the vaccines that the bishops have now sown doubt about are literally the only weapons against a virus that has already killed half a million Americans.

Such confusion is irresponsible and, as one member of the Pontifical Academy for Life put it, "anti-life."

Abortion was also the boogeyman behind the Inauguration Day statement, in which Gomez doubled down on the assertion that abortion is the "preeminent priority" of the bishops — language adopted by the bishops for voter materials before the 2020 presidential election.

A reminder: Preeminent does not mean "only" or "determinative."

Coincidentally — or perhaps not — both of these statements conflicted with messages coming from Pope Francis and the Vatican. The pope's Inauguration Day telegram skipped the finger-wagging and, for the time being anyway, stuck to a more positive tone. And the Vatican has, for months, been consistent with the message that not only are all vaccines morally acceptable, they are part of a Christian duty to pursue the common good.

A mere three days after the vaccine statement debacle, the U.S. bishops were once again citing abortion as getting in the way of their support for life-saving coronavirus measures, this time for those suffering the economic consequences of the yearlong pandemic.

Just as Senate clerks were finishing the forced overnight reading of the American Rescue Plan Act of 2021 — a delay tactic from Wisconsin Sen. Ron Johnson — Gomez and chairs of seven bishops' committees released a statement opposing abortion funding in that COVID-19 relief bill.

While admitting that the legislation provides "much needed assistance for American families and businesses hard hit by the coronavirus pandemic," the bishops were "deeply concerned" that it did not include abortion funding restrictions. Without such restrictions, the bishops' statement said, Catholics would be forced to oppose the COVID-19 relief package.

Once again, abortion trumps any other concern. But it doesn't have to be that black and white. The whole reason our Catholic moral tradition includes analysis of the issue of cooperation with evil is to allow people to live in a complicated moral universe with integrity.

Here's an idea: If the bishops want to avoid the accusation that they care only about life inside the womb, they could issue statements that, you know, actually express care about life outside the womb.

A version of this story appeared in the March 19-April 1, 2021 print issue under the headline: For bishops, abortion trumps all other concerns.