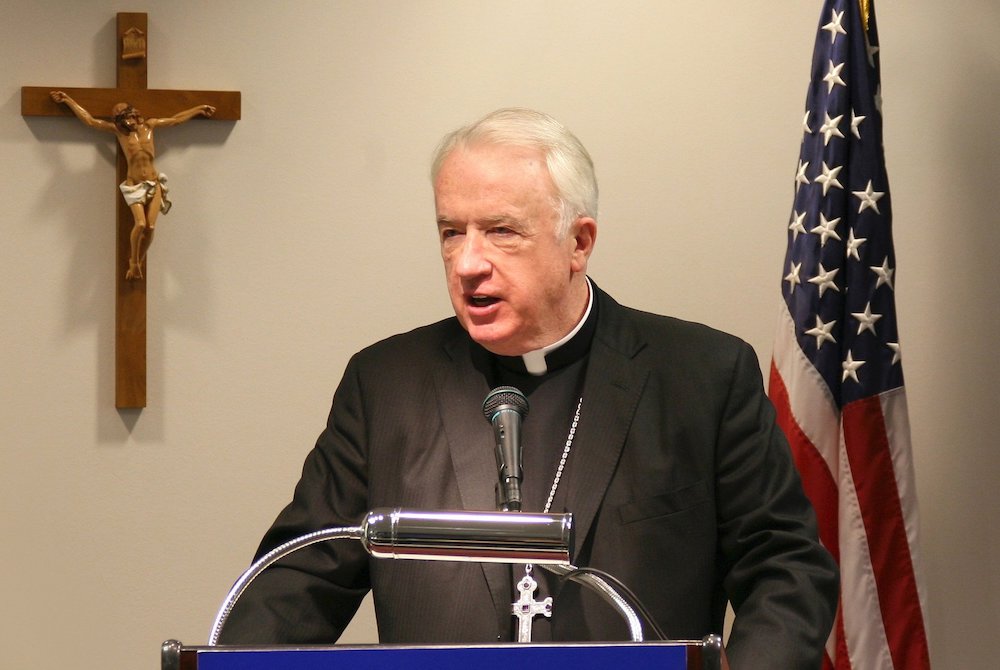 In this 2017 file photo, Bishop Michael Bransfield, then head of the Diocese of Wheeling-Charleston, West Virginia, is seen at Wheeling Hospital. (CNS/Colleen Rowan, The Catholic Spirit)

Repentance is something that Catholics usually understand.

That is one reason why former Bishop Michael Bransfield's response to the charges leveled against him is so egregious.

Bransfield formerly led the Diocese of Wheeling-Charleston, West Virginia. There he proceeded to, according to a church investigation, embezzle $792,000 while sexually harassing seminarians.

Bransfield, according to the diocese, has paid back $441,000, and will retire with benefits, including a $2,250 monthly pension. That's far less than the normal $6,200 for a retired bishop, but not a bad deal for Bransfield considering the circumstances.

"I am writing to apologize for any scandal or wonderment caused by words or actions attributed to me during my tenure," Bransfield wrote in an Aug. 15 letter of apology to his former diocese.

Note the tortured prose. "Any scandal or wonderment" that were "attributed to me during my tenure."

The way Bransfield describes it, it was all a misunderstanding.

But the investigation tells another story.

There was the money. In the course of running a diocese in what is one of the nation's poorest regions, Bransfield pilfered an ungodly sum, much of it spent on luxury trips and liquor, including spreading largesse around to prominent church officials in Rome and in the American hierarchy.

And then there were the accusations of sexual abuse. In a world where corporate chieftains are now banished for taking liberties with their underlings, Bransfield escaped with little accountability for what the church investigation describes as routine harassment of seminarians. A seminarian is, in the church system, at the total mercy of his bishop, who can throw out years of study and the dream of priesthood on a whim, making them, as a class, more vulnerable than nearly any employee.

In 2019, the diocese announced it had settled a lawsuit by a former altar server. The accusation was that Bransfield molested boys and men, including priests, often after consuming large amounts of expensive liqueur.

In his letter, Bransfield responded: "There have been allegations that by certain words and actions I have caused certain priests and seminarians to feel sexually harassed. Although that was never my intent, if anything that I said or did caused others to feel that way, then I am profoundly sorry."

Note to the former bishop: They didn't just feel harassed, they were actually harassed, according to the church investigation.

As we reported on last year, a number of West Virginia Catholics saw what was going on and pleaded for help for years, only to be ignored until news reports circulated about the scandals. Now those beleaguered Catholics confront the non-apology apology from their tormentor.

There is so much to be done in healing the wounds of the church in West Virginia. A good start would be a full-throated act of contrition. Catholics know that we are all sinners and fail to live up to the Gospel. Still change begins with acknowledgement of wrongs.

The people of God in West Virginia are right to demand more than rationalizations and defense of the indefensible. Former Bishop Bransfield, please reexamine your conscience, so the Catholics of your former diocese can have a chance to emerge with some hope of moving beyond your sordid tenure.

A version of this story appeared in the Sept 18-Oct 1, 2020 print issue under the headline: West Virginia bishop should reexamine his conscience.