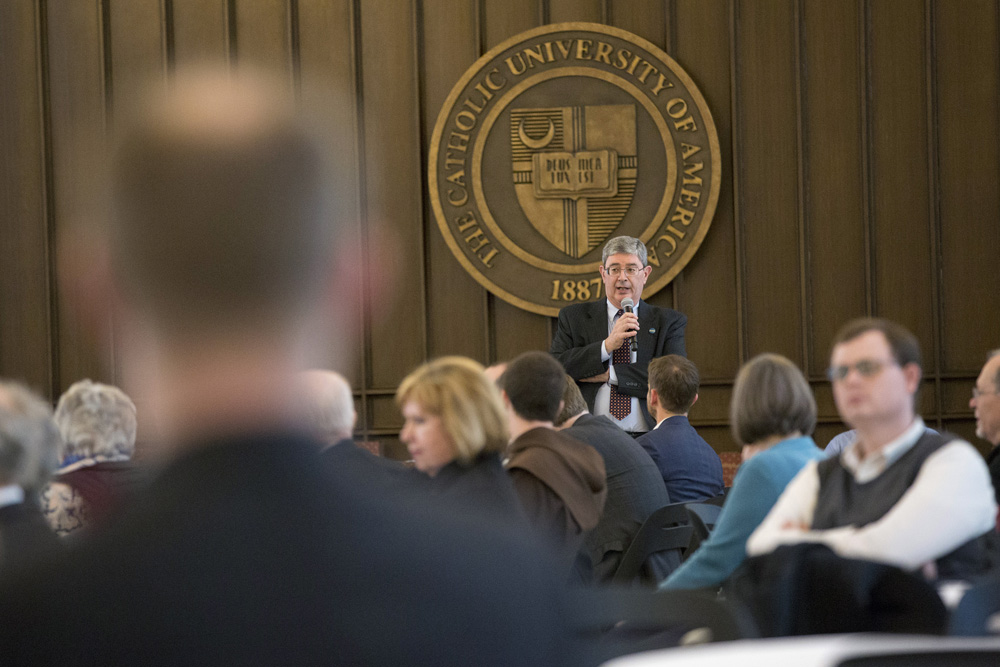 George Weigel speaks at The Catholic University of America in Washington during a March 7, 2018, symposium celebrating the life and work of Fr. Richard John Neuhaus. (CNS/Jaclyn Lippelmann, Catholic Standard)

The Catholic University of America decided to give the final guest speaker spot in its commendable series of four programs examining the priest sex abuse crisis to George Weigel. That was unfortunate, because his long-discredited narrative about the causes of the scandal and his illusory ideas about how to deal with it do a great disservice to the Catholic faithful in this moment when so much of the church is finally squaring up to the awful truth.

Weigel has for decades pushed a script, embellished from time to time, that defies logic, that at a minimum misrepresents data, that distorts and even falsifies verifiable history, and that engages in shameless deception to protect his principal enterprise — a gilded portrayal of the hastily sainted Pope John Paul II.

If the case he makes is so flawed, why bother spending any time on it? Precisely because Weigel can still command center stage at signature Catholic settings. He has long been an unabashed apologist not only for a pope but for the clerical and hierarchical culture now under scrutiny. He has an important perch as Distinguished Senior Fellow and William E. Simon Chair in Catholic Studies at the conservative Ethics and Public Policy Center, and a pulpit at First Things, a magazine that initially helped fashion his misconceptions. He is a regular traveler with Timothy Busch's Napa Institute, an organization espousing extreme libertarian views and increasingly a gathering point for those opposed to Pope Francis. This year's Napa Institute main speaker is Cardinal Raymond Burke, a leader of the Francis opposition.

Weigel has been preening hierarchical feathers for years. He is backed by big money. He is a Catholic to be reckoned with.

And so it is imperative that one also reckon with the fact that on the clergy sex abuse crisis, his analysis is terribly defective.

It is an important reckoning, too, because after nearly three and a half decades of public scandal, some at the highest levels of church leadership as well as Catholic lay leaders — some of whom were also represented on the CUA stage — have finally come to accept the truth. This is no time to turn back.

Weigel has most recently targeted, as a way of calling into question the matter of the wide culpability of church leaders, Pennsylvania attorney general Josh Shapiro and, by extension, all other attorneys general and the growing number of state investigations underway into the church's handling of abusive priests. The church is being unfairly attacked, Weigel argues. The events of decades are being "telescoped" to appear that all of the abuse is occurring in the present, he says. And the oldest deflection: abuse is happening everywhere else, so why is the church being singled out?

First, that attorneys general are often politically ambitious and may use spectacular reports to their personal advantage is hardly a new phenomenon. That Shapiro's explosive report was flawed is also not new — and those flaws were dealt with in these pages at considerable length by Hank Shea, a former federal prosecutor who now teaches law at the University of St. Thomas. But none of the critiques — here or elsewhere — argue that any grand jury report manufactured the horrific behavior of priests or the consistent and extended and deliberate cover-up of those crimes by bishops.

It should be of little consolation to Catholics that similar horrors can be found throughout society, especially when people like Weigel harshly criticize the wider culture and hold the church up as an alternative approach to life.

It may be that there is now a laser focus on the church because after years of civil authority deferring to church leaders and being complicit in keeping the crimes quiet, after discovering that during those years the bishops essentially lied not only to civil authorities but also to their own people, the tables have turned.

The news media also comes into Weigel's sights, and that is no surprise. For years he and his colleague, the late Fr. Richard John Neuhaus, vilified those who uncovered the truth. Neuhaus and Weigel celebrated, in particular, one of the most notorious pedophiles and corrupt clerics in the modern era, Marcial Maciel Degollado, founder of the Legionaries of Christ. In a 2002 piece, Neuhaus defamed Jason Berry, who did groundbreaking reporting on the scandal and on Maciel and the Legion, along with his colleague Gerald Renner, both widely respected Catholic journalists. Neuhaus trashed them both, their reporting, their motivations and, of course, NCR, where much of Berry's work appeared.

Berry's and Renner's reporting, we know, proved accurate and above reproach. It remains the most complete record of what actually happened.

Today, Weigel holds that figures like Maciel and former cardinal Theodore McCarrick may have been demonically possessed. He also believes that Satan was especially involved in roiling up the scandal in order to get in the way of what was then John Paul II's new evangelization initiative. Throw in the '60s sexual revolution and secularism and relativism and, well, it becomes clear. In Weigel's view — one that echoes an old Neuhaus mantra — the central problem was a lack of fidelity that was strained by all those outside forces.

People like Maciel and McCarrick may have been possessed, but they were also celebrated by John Paul II. In Maciel's case, celebrated as a model of the pope's idea of heroic priesthood. He even once exalted him as an exemplary guide to young people. In the case of McCarrick, the pope promoted him a number of times, made him a cardinal and sent him to take over the important archdiocese of Washington.

In The End and the Beginning: Pope John Paul II — The Victory of Freedom, the Last Years, the Legacy, Weigel concedes that the pope could be deceived. But it was his virtue that caused him to overlook the dark side of others. It was the pope's "profound disinclination to humiliate, or to make a spectacle of, someone else" as well as "his occasional tendency to project his own virtues onto others" that caused "misjudgments about personalities, including clergy and senior members of the hierarchy who ought to have been disciplined or compelled to retire."

That kind of excuse-making only diminishes the legacy of a pope who, as Weigel compellingly puts it, was pivotal in inspiring a "revolution in conscience" that had much to do with the nonviolent overthrow of communism. John Paul II on the world stage doesn't square with someone so wrought with concern for the feelings of others that he could be steamrolled by deceptive actors. Any of the dozens of theologians and thinkers he pursued with fervor, bringing them before the Congregation for the Doctrine of the Faith,  for questioning and destroying their reputations and their work in the doing, might have trouble with Weigel's description.

We know now that the abuse crisis in the church is systemic, that it occurs across cultural boundaries, that its principal hallmark is a cover-up enabled by clerical and hierarchical cultures that had, over centuries, become enclaves of privilege and secrecy, a world that saw itself as ontologically different from the rest of humanity and beyond accountability. In light of what we now know, Weigel's narrative rings hollow, a lingering, empty deception.

For the Catholic community and its leaders, it has been too long and difficult a slog toward hard-earned truth to be tempted now by easy answers. Lay involvement is certainly essential to recovery and healing, but no outside influence can substitute for the deep reforms of the clerical and hierarchical cultures that has yet to occur.

A version of this story appeared in the May 17-30, 2019 print issue under the headline: George Weigel, wrong then, wrong now.