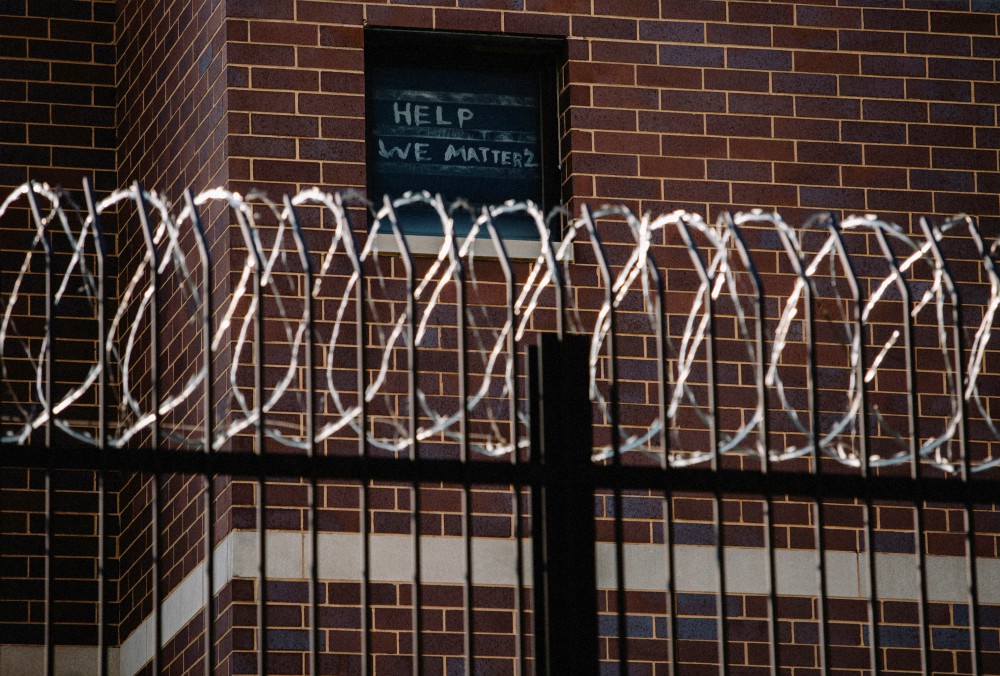 Signs made by Cook County Jail prisoners in Chicago plead for help April 7 during the coronavirus pandemic. (CNS/Reuters/Jim Vondruska)

While some Americans are protesting for the right not to take precautions against the coronavirus, one group of our fellow citizens doesn't have any choice: those in prison or jail. They have, by definition, lost their freedoms, in this case to socially distance from others.

But incarceration shouldn't be a death sentence, especially for nonviolent offenders, or those awaiting trial but unable to afford bail, in our nation's already overcrowded jails and prisons.

That's exactly what has happened for the 218 U.S. prisoners who have died of coronavirus-related causes in just four weeks (March 26-April 29), according to the Marshall Project, which has been tracking the disease's spread among those incarcerated in the U.S.

By of the end of April, at least 14,513 people in prison had tested positive for the illness, a more than 50% increase from the week before, the Marshall Project reported.

As NCR has reported, many Catholic prison ministers are calling for early release of nonviolent prisoners, including the elderly and those convicted of drug offenses, to literally save their lives during an infectious disease pandemic.

Deacon Eddie Grider, director of prison ministry for the Diocese of Lexington, Kentucky, opposes the release of violent offenders during the crisis but believes those locked up for nonviolent offenses should be released.

"We need to look hard at what some people are in for, and if overcrowding is a safety issue, set a time for their release; but we must be very diligent due to the close confinement they are in," he told NCR.

All agree that once released, ex-offenders will need support services for food, shelter and eventual employment to survive.

Pope Francis, who has repeatedly brought attention to the plight of prisoners and who has made mercy central to his pontificate, has prayed several times specifically for the incarcerated during the pandemic — although he has not directly called for any release.

"Let us pray for those responsible, for those who have to make decisions at this time, so that they may find just and creative ways to solve this problem," the pope said at an April 6 Mass, warning that otherwise "there is a danger that this pandemic will end in a serious calamity."

The Hebrew Scriptures call for the release of prisoners during a jubilee year as part of creating a more just and equitable society. We believe such life-saving mercy should also apply during a pandemic year, too.

A version of this story appeared in the May 15-28, 2020 print issue under the headline: Have mercy: Free nonviolent prisoners during pandemic.