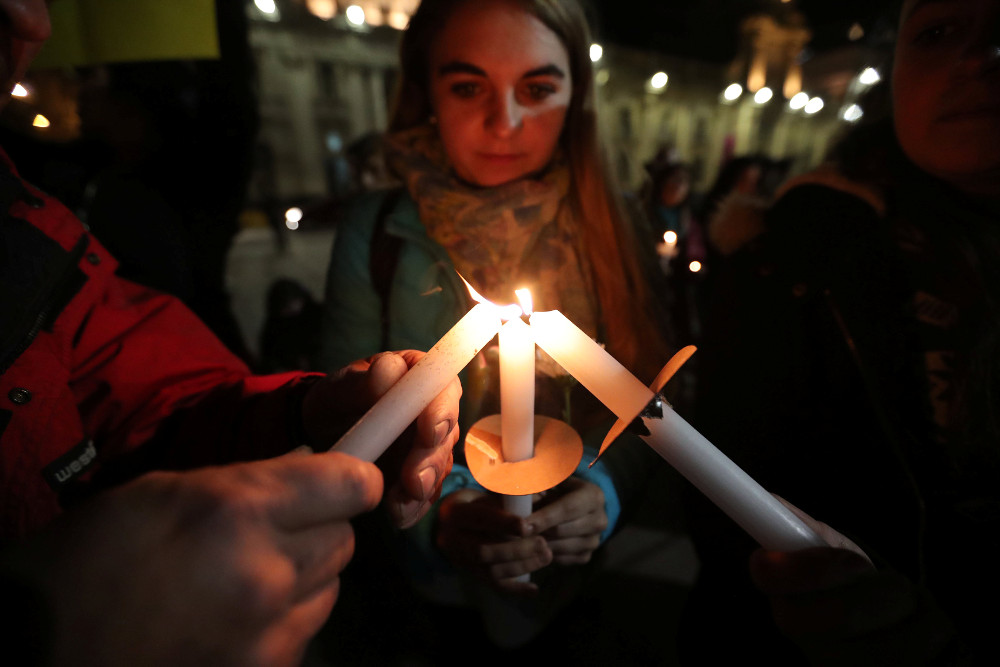 People light candles during an Aug. 20 vigil to protest sexual abuse in the Chilean Catholic church outside the Santiago cathedral. (CNS/Reuters/Ivan Alvarado)

The Catholic community has arrived at a point in its history so seared by raw reality that we are all left with nothing to lean against or hide behind. Our leaders, drained of authority and credibility, can only follow as we move beyond overburdened expressions, beyond even the content of our normal prayers. We grasp for some new psalm of lamentation to fit this horrid moment and search for a new way to live as a Catholic community.

The scandal of children sexually abused by priests whose acts were covered up by bishops has been in the public eye in gruesome detail for more than 30 years. The Pennsylvania grand jury report, for instance, was not the first nor was it worse in detail than others were. Why it should spark the public conscience and the outrage of Catholics as it has doesn't matter. A new moment is upon us.

The papacy of Francis, so promising of needed reform, stands at an inflection point. Either he handles this crisis with effective, wide-ranging and concrete actions, or his tenure will go down as a disappointing failure.

Most important, the current moment must lead to a radical reform of Catholic clerical culture and the meaning of ordination itself. If we cannot begin this challenging work, we should at least have the honesty to say that a monstrous evil has prevailed and that we no longer understand what it means to be a church of Jesus Christ.

Change must come from the top. In the United States, it must be initiated by the nation's Conference of Catholic Bishops. Globally, we look to Pope Francis, whose humble example and goodness have changed the culture of the papacy in dramatic ways, to acknowledge the precipice and guide us as a united church away from it.

We do appreciate, as well as any on the outside can, the difficulties and dangers Francis faces. Powerful forces in the church have been trying to sabotage his papacy from the earliest days. The latest came in the form of a letter from Archbishop Carlo Maria Viganò, a disgruntled former nuncio to the United States. His correspondence is disjointed and riddled with inaccuracies and unsubstantiated allegations that Francis knew about former Cardinal Theodore McCarrick's abuse of seminarians and children years ago.

The gloves are clearly off, the internecine fighting has gone public and the enemies of Francis are, without conscience or nuance, seizing this moment of turmoil as an opportunity to undermine his papacy. We question whether their commitment to keep children safe is genuine and worry that the noise surrounding Viganò's letter will serve only to distract from real and necessary reform. 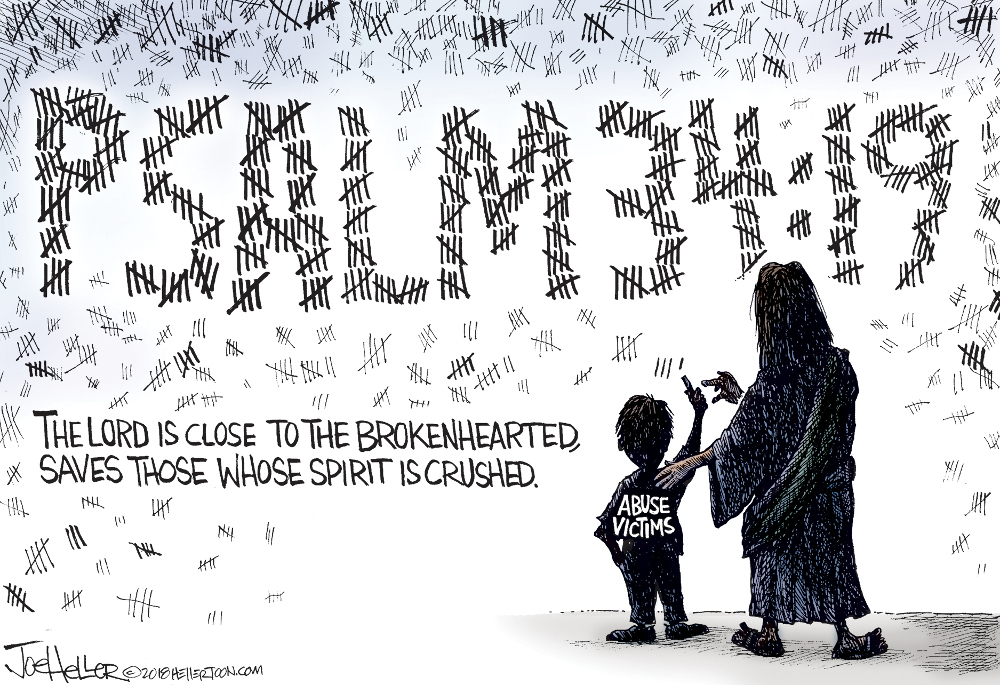 Cartoonist Joe Heller depicts the more than 1,000 people who say they were abused by some 301 priests in Pennsylvania, many whom are now dead. (CNS/Joe Heller)

Reporting on the crisis appeared in these pages in 1985, and here and in other publications for 17 years before the upheaval in Boston galvanized public attention. The U.S. bishops dismissed multiple serious and detailed warnings. Early on, they opted for what has become known as "the playbook": engaging a legal strategy that often sought to intimidate victims, paid huge sums for silence and hid the crimes of their priests. They regularly transferred sick and dangerous clerics to other parishes, dioceses and even to other countries without disclosing the potential for problems. Their sense of pastoral responsibility was narrowed to the interests of the clergy and the reputation of the clerical culture.

The history is significant because any path into the future must consider the mistakes of the past. It must be acknowledged that the emergence of the sex abuse crisis spanned most of the reign of St. Pope John Paul II. Revelations of abuse and cover-up accumulated almost monthly during his long pontificate, and he provided the model for the hierarchy's approach to the growing scandal. Not once did he meet with victims. While decrying abuse, he did nothing to require accountability from his bishops, most of whom he appointed. He refused to listen to the few who dared warn him.

One of John Paul's examples of "heroic priesthood" was Marcial Maciel Degollado, founder of the Legionaries of Christ religious order, who molested youngsters in his schools and fathered at least two children by different women. John Paul, who once referred to Maciel as "an efficacious guide to youth," blocked adjudication of a case against the notorious pedophile. He repeatedly ignored detailed and persuasive accounts from accomplished men who had left the order because of Maciel's abuse.

Given the ethos of the current era, John Paul would be a certain target for discipline. There is clearly a danger in rushing someone to sainthood.

Church leaders have been slow to acknowledge the implications of the failure of the clerical culture, that clubby, secretive, all-male construct whose members often exercised extreme control over the lives of the faithful. It is beyond time to do a deep examination of the damning record, and John Paul II stands in the middle of it.

The fact is that Francis is the first pope to aggressively sanction credibly accused bishops and to apologize for failing to believe and act in Chile before he decided to seek mass resignations and meet with Chilean victims on their terms. Now he must continue to buck the headwinds, first by making the work of the Pontifical Commission for the Protection of Minors a priority in the Vatican.

While progress has been reported among the individual working groups of the commission, the body still has no teeth. At the very least, the pope must insist that the Congregation for the Doctrine of the Faith respect and work with the requests that come out of the sex abuse commission so that it not only asks questions but also is able to issue workable recommendations.

In addition, Francis needs to institute a new dicastery to deal with clergy sex abuse in all of its forms and manifestations, including bishops who cover up the evil. Such an agency must engage outside experts of significant enough stature and accomplishment that they will withstand pressures from other elements of the Curia to compromise their work.

The church also needs a blue-ribbon international group of experts charged with investigating, across a range of disciplines, the clergy culture, how it developed to this stage and what changes are necessary. This has to be an exhaustive study of the growth of the culture, of seminaries and formation programs, and all of the encrustations and presumptions of privilege and power that have accrued over centuries. In order to understand what needs to change in the future, the church must understand how the clergy culture arrived at a point where its leaders could turn their backs on children who had been sexually savaged to protect their predators and the culture they inhabit.

The enemies of Francis are, without conscience or nuance, seizing this moment of turmoil as an opportunity to undermine his papacy. We question their commitment to keep children safe.

While the crime of sex abuse knows no international boundaries, the current crisis is — once again — centered in the United States. McCarrick was a top prelate in this nation. The Pennsylvania grand jury investigated six U.S. dioceses. And Viganò chose to express his revenge through two conservative news outlets based in the United States.

Therefore, the U.S. church is ground zero in this war and it is up to the leaders of that church to step forward and take control of the brain bleed before it does irreparable damage.

First and foremost, we call for a national inquiry into every diocese across the 50 states. This investigation must be led by a body that is independent of the church and includes a strong representation of laity, especially women, and non-Catholics. We in this church need, finally, a full and national accounting of what has happened and who was responsible — for any crime and any cover-up — in at least the last century.

We also call on the U.S. bishops to mandate that every diocese make public a list of credibly accused priests and deacons and their parish assignments. It's time for this level of transparency so that all parishioners can start to regain a trust in their faith institution.

Moreover, we want to see the abolition of confidentiality agreements that force the silence of sex abuse victims. That means dissolving the non-disclosure agreements already in place, unless, for some reason, victims ask to keep them in place.

Finally, we urge the bishops, the leaders of this church, to refuse and refute the argument rising from those who claim that homosexuality in the priesthood is at the root of the sex abuse problem. The fact — and studies have established the fact — is that the assault of children within the church structure is no more the product of gay culture than the assault of children within families, where most of it occurs, is a product of heterosexual culture. The problem is a sickness, and the most egregious offense to the Catholic community was the bishops' deliberate strategy to cover up these unfathomable crimes. 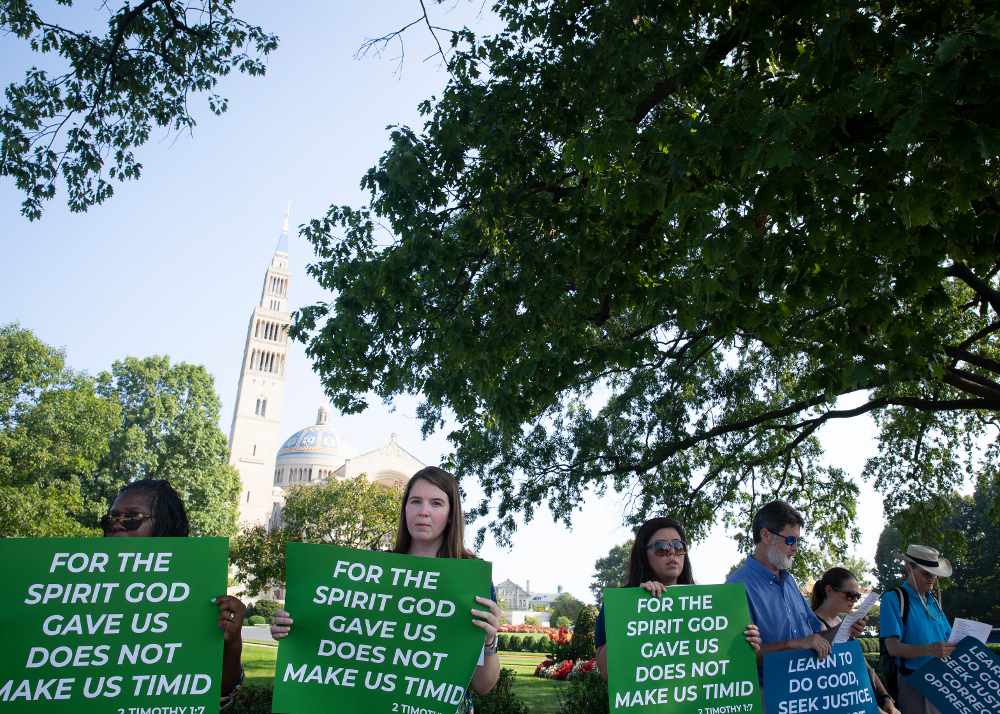 Catholic school teachers in Washington protest against Cardinal Donald Wuerl at a back-to-school Mass at the Basilica of the National Shrine of the Immaculate Conception in Washington Aug. 28. (CNS/Tyler Orsburn)

The path to purification will be painful and embarrassing, but the culture must begin the process of reform quickly and in earnest. If there is any substance behind the recent spate of episcopal apologies and remorse for this "moral catastrophe," they will finally begin an orderly process of truth-telling, something this page has urged for decades.

Rather than wait for the inevitable next round of shocking revelations, bishops should appoint respected legal and law-enforcement experts to comb the files and make complete, dispassionate disclosure of the abuse that has occurred and the money that has been spent over decades to buy victims' silence. Telling the whole truth is the essential first step in any attempt to restore trust.

We corporately stand at the point of decision one always faces when acknowledging consequential and, in this case, public sin: Do we move into the pain of purification or do we continue to feint and equivocate, living in constant fear of the next revelation?

Choosing the path of purification will lead us to the deepest part of the sacramental life we claim is the reality that binds us. It will lead us through the heart of the Gospel where we meet the Jesus of infinite mercy and forgiveness. But first, the examination and the confession of the truth.

We know how to do this.

A version of this story appeared in the Sept 7-20, 2018 print issue under the headline: Let us choose painful path of purification.