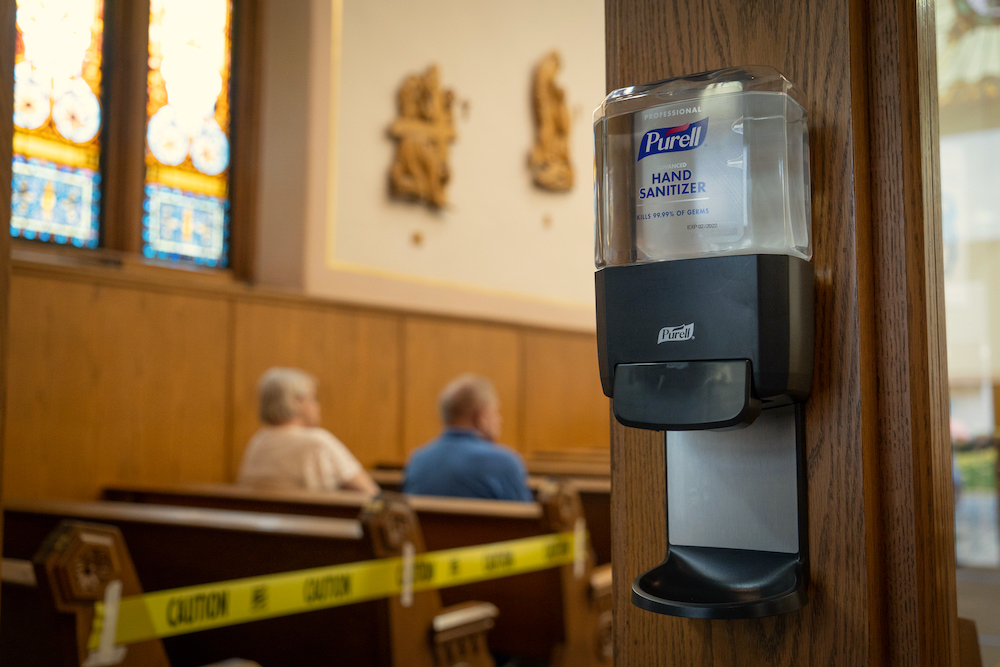 A hand-sanitizing station is seen at the entrance to the sanctuary of St. Louis Church in Batesville, Indiana, May 23, with some pews taped off to create social distancing. (CNS/Katie Rutter)

An informal poll around NCR's virtual newsroom found that, as of the beginning of July, only a small number of our staffers had returned to in-person Mass. Perhaps we are a cautious bunch. Or, more likely, our jobs require us to regularly read the news — and the news about the coronavirus is still terrifying.

As this issue goes to press, the number of new COVID-19 cases in the United States has gone up 80% in the past two weeks, according to a New York Times database. Florida, Texas, Arizona and California are the new hotspots, but even the Midwest is seeing a rising number of cases — and not just because of increased testing, as the Trump administration's messaging says.

Countries in the European Union are reopening their borders to travelers from countries where the pandemic has been brought sufficiently under control. That does not include the United States.

Meanwhile, the nation's top infectious disease expert, Jesuit-educated Dr. Anthony Fauci, testified before the U.S. Senate June 30, warning that "we're going in the wrong direction" in addressing the coronavirus. With a record-breaking average of more than 40,000 new cases per day June 24 to June 29, Fauci estimated that the U.S. could face rates of 100,000 cases per day — especially if more care is not paid to guidelines on re-opening.

In the midst of all this, some parishioners are returning to their churches for Mass. They make reservations, wear masks, have their temperature checked at the door, sit in cordoned-off pews, refrain from singing and exchanging the sign of peace, follow masking tape arrows on the floor to stay socially distanced from others in the Communion line, and liberally apply hand sanitizer before receiving the host.

It is a very different experience than a pre-coronavirus liturgy: "not the old normal," as described by Fr. Ralph Sommer, pastor of St. Bernard's Parish in Levittown, New York, which opened their large school gym for Mass as of Father's Day, June 21.

But many Catholics are happy to have the opportunity to worship together and receive Eucharist in person. In the past weeks, NCR has profiled a number of parishes as they have reopened, including in Appalachia, Los Angeles, Camden, New Jersey, and south suburban Chicago.

Pastors and parish officials reported that those who returned were hungry. "They missed it," said Fr. Tom Burke, pastor of the newly formed St. Mary Magdalene Parish in Pittsburgh. "It was like they were receiving their first holy Communion all over again."

Parish staff and volunteers are working hard to prepare the facilities and the Mass-goers for safe, socially distanced liturgies, following diocesan or archdiocesan guidelines, as well as state ones. But some expressed concern about elderly or other at-risk parishioners taking unnecessary risks, especially as cases continue to rise.

As experts learn more about the virus and how it spreads, there is evidence that indoor gatherings of medium- to large-sized groups are more dangerous than most outdoor activities.

Dr. Ngozi Ezike, director of Illinois' Department of Public Health, created her personal list of do's and don'ts for when she will feel safe doing a variety of activities. Going to church? Not for "a year or more," she told the Chicago Sun-Times.

Throughout the lockdown, so-called religious liberty advocates have complained that churches were being unfairly singled out for closure, when stores or even nail salons were re-opening. But spending an hour inside a church with dozens of other people is not the same as popping into a store for five minutes to pick up milk. 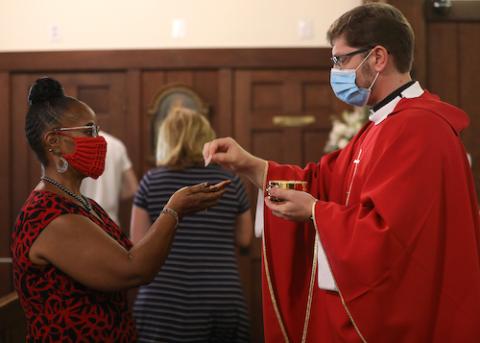 Fr. Michal Sajnog of Our Lady of the Wayside Parish in Chaptico, Maryland, gives Communion to a woman on Pentecost Sunday May 31. (CNS/Catholic Standard/Andrew Biraj)

Yes, weekly liturgy is an essential part of our faith — and, let's be honest, most parishes were already struggling financially before the pandemic. So we understand the desire to "get back to normal." But a risk-control manager from an insurance company for churches told NCR he advises parishes to plan to continue virtual Masses, particularly for those most vulnerable to the virus.

Sadly, thanks in large part to lack of leadership from the federal government, the U.S. is now facing what most believe is not the dreaded "second wave" of the virus, but rather a continuation of the first wave, which is now spreading from urban centers in the Northeast to more rural areas in the Midwest and South.

States that opened up too quickly — few followed the Trump administration's own guidelines — are now having to backtrack. It's possible that churches will once again have to close, too. If staying home from Mass means saving lives, then it's the right thing to do.

Related: Returning churchgoers greeted with new normal of distance and disinfectant
A version of this story appeared in the July 10-23, 2020 print issue under the headline: Let's be cautious about going back to church.