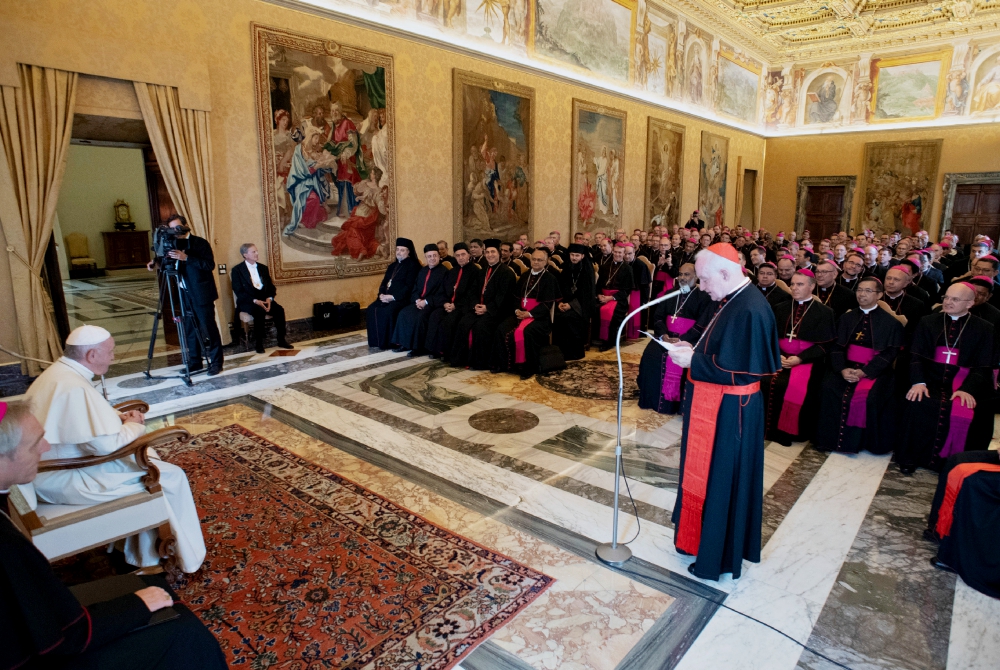 Pope Francis listens as Cardinal Marc Ouellet, prefect of the Congregation for Bishops, speaks during a meeting with recently appointed bishops from around the world at the Vatican Sept. 13. The pope spoke about updating the processes of selection, accompaniment and evaluation of bishops. (CNS/Vatican Media)

Cardinal Marc Ouellet's concise and sharply worded refutation of the now infamous Viganò letter is the very point needed to burst the bubble of fabulist concoctions spinning around the Catholic far right. Those theories, which wouldn't pass for bad fiction, are easily unveiled as clumsy attempts to discredit the Francis papacy.

Ouellet's out-of-the-ordinary pronouncement is fitting for these extraordinary times. Its very existence signals with some finality the end of the pretense of unity with which the hierarchy in recent decades attempted to mask deep divisions in its ranks.

It also bares as pretenders those who previously claimed the high ground of "orthodoxy" as defined, in their world, by unquestioning loyalty to the pope and the magisterium. In fact, their orthodoxy extended only so far as their agreement with prevailing papal tendencies.

Ouellet dissected the letter by Archbishop Carlo Maria Viganò, former nuncio to the United States, who claimed a widespread cover-up of allegations against former Cardinal Theodore McCarrick. The letter was quickly found to be an ideologically loaded screed with claims that Ouellet termed "incredible and absurd" as well as "unjust and unjustified."

The letter had been fashioned with the help of several right-wing figures who attempted to make the case for Viganò apparently so they could, in turn, use the case with the authority of a former nuncio. The whole mess has backfired.

Ouellet, however, speaks with legitimate authority as the prefect of the Congregation for Bishops. He is able to build his case from actual documents held by his congregation.

Further, Francis, the pope who ultimately dethroned McCarrick, has ordered a thorough investigation of all of the steps along McCarrick's rise through the hierarchical ranks as rumors swirled everywhere about his inappropriate sexual behavior. Those alleging cover-up may regret the investigation, since McCarrick's rise came about through appointments made by Pope John Paul II, who sent him to head the Diocese of Metuchen, New Jersey, and then the Archdiocese of Newark, New Jersey, and finally the Washington Archdiocese.

Discrediting Viganò is the easy part. Conducting a credible investigation will be more difficult, requiring a degree of transparency within the Vatican that is perhaps unprecedented. But the crisis requires unprecedented responses.

Quite apart from the investigation, Ouellet's intervention was valuable in dealing with other oddities of the moment. The most telling line in Ouellet's response is the one that directly addresses Viganò groupies in the United States: "In response to your unjust and unjustified attack on the facts, dear Viganò, I conclude therefore that the accusation is a political frame job lacking a real foundation."

Viganò was able to rattle the church with his fanciful claims and gather around him some of the more eccentric expressions of Catholicism in the United States because of the leadership vacuum created by both the deeply compromising damage of the clergy sex abuse scandal and the lingering effects of John Paul II's episcopal appointments. It is known that the late and sainted pope valued loyalty far more than leadership in his bishops. In the United States, that meant a national conference that once wrestled with major cultural issues was reduced to much internal squabbling over minutiae.

Other beneficiaries of that vacuum were lay forces on the right wing of the church that figured out how to manipulate the Catholic narrative in this country by funding a host of new nonprofit organizations with narrow political and ideological ambitions. NCR has begun cataloging the money and the messages in stories documenting the funding and interwoven interests of such groups. A connecting thread among them is a version of the Gospel unabashedly at the service of Republican Party politics and unbridled capitalism.

One of the brashest operators among this relatively new breed of Catholic lay involvement is Napa Institute founder Timothy Busch. He is a successful and wealthy entrepreneur who, when he is not tending to his boutique winery, high-end resorts and investment business, is bouncing about the church as if it were an arcade and he was in search of a favorite game. His current corner of choice in the arcade is the Catholic University of America, where his name is affixed to the business school and where he conducts conferences on how to dress up libertarian economics in a Catholic costume.

We have been reporting on and monitoring the activities of Busch for several years because he is among the most aggressive of that cast of U.S. Catholics whose primary ambition, it seems, is to convince the rest of us that the Christian Gospel was actually promulgated to justify the most extreme expressions of American-style capitalism.

It used to be that in pursuit of those ends, he drew his bona fides from hobnobbing with just about anyone in fine silk and fancy lace beneath a red or purple skullcap. His ecclesiology embraced a clericalism of the highest order. He was the kind of hierarchical toady who had the money to court the highly placed and treat them to his institute's summer gatherings in the California wine country for bouts of what he called "in-your-face Catholicism."

But at some point this year, he got the memo that bishops didn't necessarily hold the keys to the kingdom, especially not hierarchs like his organization's "independent contractor," Archbishop John Nienstedt. Napa took in Nienstedt after he resigned as archbishop of St. Paul-Minneapolis for mishandling abuse cases and amid an investigation into allegations that he had engaged in sexual misconduct. The Napa Institute only recently cut ties with Nienstedt.

Busch is not alone among those who, having virtually ignored the sex abuse crisis for more than 30 years, now seize on the mess as an opportunity to smear the current pope and to plant the church of their dreams. It is a church, ironically, that would return us to the high notions of ordination and clericalism that led to the scandal in the first place.

Busch's new cause — reform — is a scattershot effort of misappropriated language ("We are the church!" the newly minted revolutionary declares); a staggeringly inappropriate model (he'll have respect for clerics "to the extent they are compliant with normal business acumen and behavior"); wrapped in a juvenile tantrum vowing anarchy (he will end this scandal "regardless of what civil and canon law says"). And he is a civil lawyer. And, of course, he won't do anything of the sort.

What he will do is host, as he did recently in Washington, a collection of the newly emboldened, and take as his lead the already discredited.

"Viganò has given us an agenda," declared Busch, "We need to follow those leads and push that forward."

One of the participants, Patrick Lencioni, founder of Amazing Parish, which provides consulting services for parishes, declared, "The moral authority of Pope Francis has been greatly tarnished and damaged, no doubt." Amazing arrogance, and God help the parishes that follow that lead.

Another, the equally unfiltered Bishop Robert Morlino of Madison, Wisconsin, one-upped Lencioni when he postulated that the problem today is that "there is too much talk of love in the church and too little hatred of evil."

Morlino and a range of other speakers at Busch's reform conference are convinced that the sex abuse crisis is rooted in clerical homosexuality, which, in turn, justifies unleashing torrents of ugly and perfectly inane assertions about members of the LGBT community within the church and at large.

Of course, it is the widely held view of experts, some of whom conducted a survey paid for by the bishops, and the view as well of members of the clerical ranks with impressive psychological and medical training, that the root of the crisis is not gayness. It is, rather, an illness that was allowed to flourish in the church because of the deceit and cover-up of a clerical culture desperately in need of fundamental reform.

The leadership vacuum is sucking into itself realms of Catholic oddities and peculiarities that have accumulated over recent decades as the community lives through a fundamental transition. Old and unsustainable parochial structures and unrealistic expectations of the ordained and vowed state are fading. We have reached bedrock. At that level, the questions are no less essential than what it means today to be ordained and what it means to be Catholic.

The work ahead is too serious and critical to be left to the charlatans and religious carny barkers who have, all along, been a large part of the problem. We are glad to see that institutions such as Georgetown University and Fordham University are holding open discussions newly exploring ways of dealing with the scandal. We'll be reporting more on those developments in the coming weeks.

The work ahead will require more than bluster and misappropriated slogans. It will require accessing the deepest levels of our sacramental tradition. It will require the imposition of unprecedented accountability from bishops. It will also require bishops with the will to confront the toughest questions about how the clerical culture arrived at this point.

A version of this story appeared in the Nov 2-15, 2018 print issue under the headline: Right-wing anti-Francis strategy exposed.