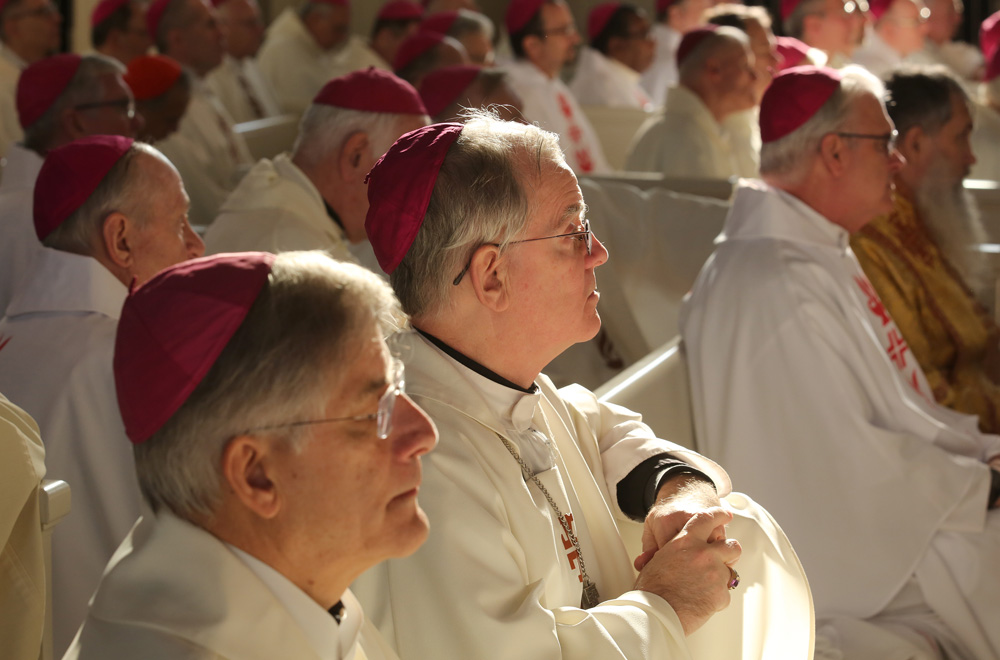 U.S. bishops listen to the homily at Mass Jan. 3 in the Chapel of the Immaculate Conception during their Jan. 2-8 retreat at Mundelein Seminary at the University of St. Mary of the Lake in Illinois, near Chicago. (CNS/Bob Roller)

It was a highly unusual event when most of the bishops in the United States gathered for a weeklong retreat earlier in January at Mundelein Seminary outside of Chicago. The event was driven by a most unusual and debilitating problem, the clergy sex abuse crisis, which has bedeviled the church in the United States for nearly 34 years.

The event itself may have been the primary goal — gathering a group of men publicly divided over a host of issues for prayer and meditation away from daily pressures. Only time will tell if there are long-term benefits.

More immediately, however, the point of the gathering as it relates to the abuse scandal remains quite puzzling, particularly in light of the 11 talks delivered by Capuchin Fr. Raniero Cantalamessa, official preacher of the papal household.

Related: Pope's preacher goes back to basics in talks to bishops

He began by announcing that the charge he received from Pope Francis was that he "lead a week of spiritual exercises for the bishop conference so that the bishops, far from their daily commitments, in a climate of prayer and silence and in a personal encounter with the Lord, may receive the strength and light of the Holy Spirit to find the right solution for the problems that afflict the church of the United States today."

In that regard, he said, "I am not going to talk about pedophilia or give advice about eventual solutions. That is not my task and I would not have the competence to do it."

It is beyond our competence and the space here to deal authoritatively with Cantalamessa's outpouring of erudition, a river of words that took bishops through discourses on the kerygma, Christian asceticism, prayer, spirituality, conversion, the centrality of the person of Jesus, all laced through with biblical scholarship, modern-era theologians, the work of Francis, references to pop culture, and an unremittingly bleak analysis of contemporary culture.

But it is not beyond our competence to ask questions. And there are questions aplenty, especially heading into the meeting in February in Rome of presidents of bishops' conferences from around the world.

First, why, if the sex abuse crisis and the bishops' mishandling of it was the impetus for the retreat, was it taken off the agenda as a topic to be dealt with? Why couldn't the spiritual exercises involve leading the bishops corporately to the basic requirements of the tradition — telling the truth, repenting, seeking forgiveness — necessary for reconciliation and rebuilding trust with the community?

It appears to us that most of Cantalamessa's oratory presumes that there is not much wrong with the status quo. He seems oblivious to the depth of the problem or how disruptive it's been to the victims, their families and, by extension, the wider Catholic community.

In fact, at the start of things, the pope's preacher, quoting from The Cloud of Unknowing on contemplation, urges the bishops to put "a cloud of forgetting beneath" them, leaving behind "every problem, project or anxiety we may have at the moment." If only the rest of the church had such luxury available.

Cantalamessa sees the possibility that the scandal has led to a "much more Gospel-like and humble" church "more free from worldly power."

The church certainly has been humbled, but that is mostly the result of outside forces. Whether it can actually embrace the humility called for is yet to be seen.

In one section that we find especially unfortunate, Cantalamessa reflects on Christ's agony in the garden.

"Due to the scandals of pedophilia, many bishops in the Catholic Church, starting with the bishop of Rome, are experiencing right now exactly what Jesus experienced in Gethsemane. As we have seen the ultimate cause of his suffering … consisted in taking upon himself sins that he had not committed himself and in bearing responsibility for them in front of the Father."

We leave it to scholars to tussle with that interpretation, but it doesn't take an expert to know that the comparison is woefully out of whack. It might work better had the preacher placed the victims in the garden. The bishops were driven to making a retreat not because they were taking on the sins of others but because of what they and their brothers either did or failed to do over decades. In this instance, they don't compare very favorably with Jesus.

We hope the February gathering delivers a more bracing reality check on the need for deep reform of church structures and clerical culture.

Related: Editorial: The lesson of Opus Dei Fr. McCloskey's downfall
A version of this story appeared in the Jan 25-Feb 7, 2019 print issue under the headline: Reality check missing at bishops’ retreat.