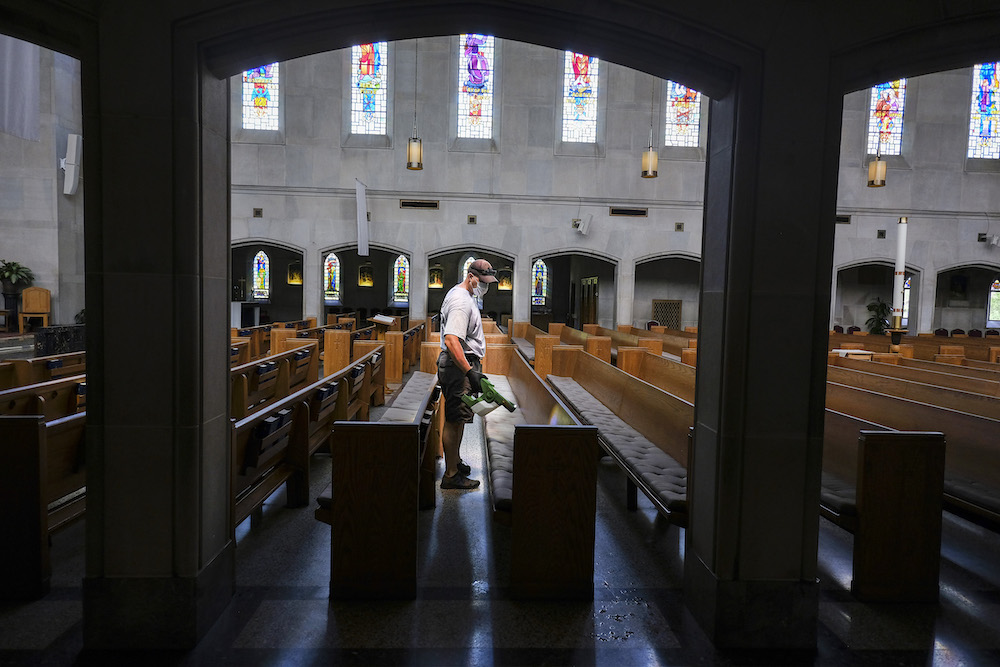 In one of Barack Obama's virtual graduation speeches May 16, the former president seemed to be calling out the current resident of the White House: "More than anything, this pandemic has fully, finally torn back the curtain on the idea that so many of the folks in charge know what they're doing. A lot of them aren't even pretending to be in charge."

Obama also could have been talking about the U.S. Conference of Catholic Bishops.

If ever there were an urgent need for unity and leadership from our church's prelates, a deadly global pandemic would be that time. Religious, spiritual and practical needs abound:

Throughout it all, many have relied on their faith and our Catholic tradition for hope, solace, inspiration and moral guidance. And many Catholic organizations have responded to the spiritual and material needs as best they can.

Yet, as the pandemic moves from lockdown to reopening, the bishops' conference appears to have punted the primary decision of this phase: when and how to begin communal celebration of Mass and other sacraments.

National leadership about how to reopen churches should be at the top of a list of priorities. Yet the bishops have not created any guidelines of their own, instead only referring dioceses and parishes to recommendations made by other groups. Initially, as reported by NCR's Joshua McElwee, the U.S. bishops' conference forwarded guidelines prepared by the Thomistic Institute at the Dominican House of Studies in Washington.

Although one infectious disease specialist and four other physicians consulted on the institute's document, many of the recommendations were controversial: a plan for Mass to be on a first-come, first-served system or rotational basis, masks required for congregants but not presiders, and the use of hand sanitizer during distribution of Communion, which, they suggested, may still be received on the tongue.

Shortly afterward, the national organization of diocesan liturgical officials, the Federation of Diocesan Liturgical Commissions, published its own recommendations, which suggested that Communion on the tongue be temporarily prohibited for safety reasons.

Incidentally, Communion in the hand — allowed in the United States for 43 years now — is apparently still controversial, with some on social media declaring they would fast from Eucharist before receiving it in the hand during the pandemic. Communion on the tongue has become, like mask-wearing, an ideological symbol, divorced from any concerns about actual safety concerns.

Now, the same prelate who initially shared the Thomistic Institute's guidelines — Archbishop Leonard Blair, head of the bishops' Committee on Divine Worship — has sent a new memo to his fellow bishops that references three sets of recommendations, those from the Thomistic Institute, recommendations from the Federation of Diocesan Liturgical Commissions, and a nine-page resource from the Catholic Medical Association, developed by its Ad Hoc Committee of Catholic Doctors.

It's better than nothing. 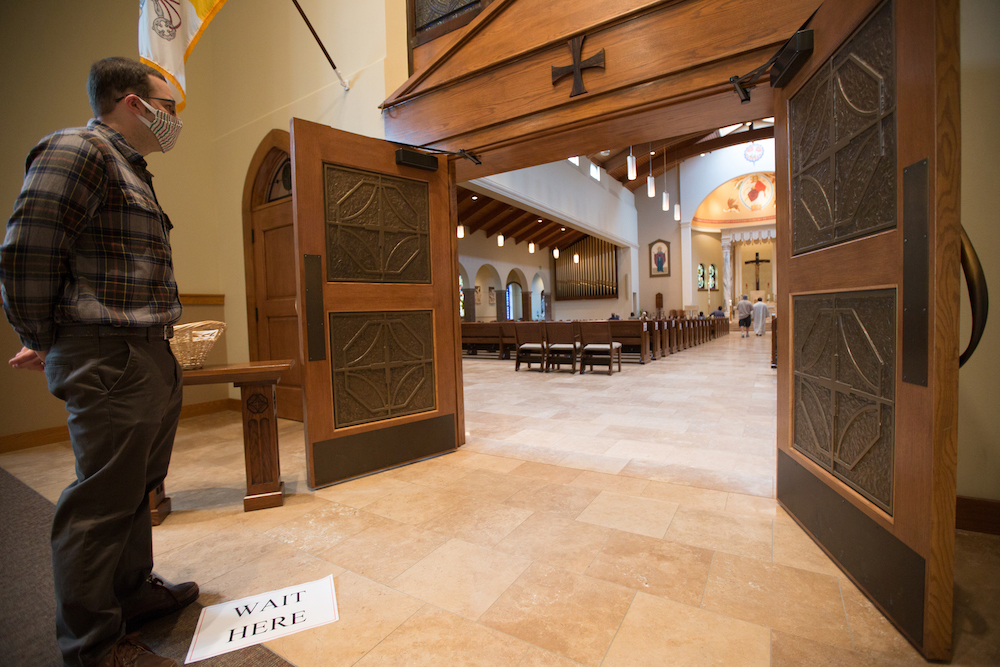 Brian Eberhardt of St. Paul, Minnesota, waits to be escorted to a pew at the Church of St. Peter May 19. (CNS/The Catholic Spirit/Dave Hrbacek)

To be sure, some individual bishops have smartly coordinated with local officials. In Chicago, for example, Cardinal Blase Cupich worked with Gov. J.B. Pritzker on a plan to allow gradual reopening of parishes, first for small groups for baptisms, reconciliation, weddings and funerals, then for private prayer and adoration, then ultimately for larger groups and public prayer. Chicago's plan includes recruiting non-vulnerable volunteers, who will be trained via webinar, and certification of readiness-to-open for each parish at each phase.

While differing local conditions demand a local response, national leadership during a crisis of this proportion is needed, too; it cannot be phoned in.

It's said that the true test of leaders is how well they function in a crisis. Sadly, the incompetence coming from the current presidential administration tops the lack of leadership from the church's bishops.

But the people of God deserve more. For decades, too many of the U.S. bishops have been stuck in a "culture war" mentality that has rendered the bishops' conference ineffective if not irrelevant. While the culture warriors have been obsessed with sexual ethics, what we need right now are the core principles of Catholic social teaching: solidarity, the common good, human dignity of all.

We haven't seen impressive leadership on that yet in response to the coronavirus. But the U.S. bishops' conference will get another chance: There will be plenty of opportunities to step up to the plate, as the country attempts to address the inequality and lack of safety net laid bare by the virus. Is it possible the conference will abandon its obsession with religious liberty and instead seek to promote the common good for all Americans?

In a second commencement speech, to high school graduates, Obama repeated his point made in the earlier talk to graduates of historical black colleges and universities: that today's leaders don't always get it right.

"So, if the world's going to get better, it's going to be up to you," he said to the graduates.

Perhaps sage advice to the next generation of U.S. Catholics, too.

A version of this story appeared in the May 29-June 11, 2020 print issue under the headline: Where is the bishops' leadership?.