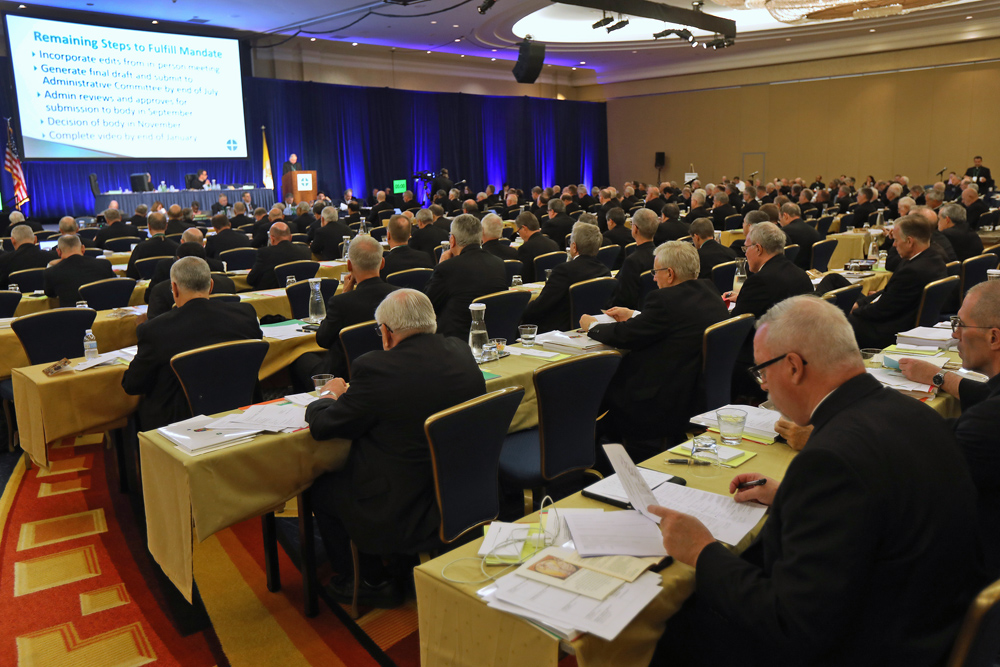 The answer, U.S. bishops agreed to at their meeting in Baltimore last week, are other, more senior, shepherds. That answer remains unsatisfying even if, according to Pope Francis' apostolic letter Vos Estis Lux Mundi and the hierarchal structure of the church, the bishops felt they had no other viable choice.

They overwhelmingly approved what has been called the metropolitan plan, relying upon the nation's archbishops to be the investigator of alleged wrongdoing and cover-ups by other bishops.

It is going to be a hard sell for ordinary Catholics, battered by the onslaught of news about their church leaders.

Bishop Shawn McKnight of Jefferson City, Missouri, recognized this in his intervention at the meeting.

"Lay involvement should be mandatory to be darn sure that we bishops do not harm the church," he said. The bishops, citing the involvement of lay panels that already exist, were not ready to go that far. Lay involvement remains strongly suggested, but not required. McKnight's plea, as well as those delivered by the lay leaders of the bishops' National Review Board and National Advisory Council, went unheeded.

Cardinal Joseph Tobin of Newark, New Jersey, told reporters at the closing press conference that archbishops know it would be foolish not to rely upon lay experts in doing investigations. We hope so.

Another intervention, this one by Archbishop Thomas Wenski of Miami, provided the bishops a stark reminder of what they are required to do. When they hear about a crime, do what good citizens are compelled to do: Call the cops.

While that approach won't cover every situation — much of what the metropolitan plan will oversee is about non-criminal if objectionable behavior — Wenski's reminder is a valuable one.

For Catholics concerned that bishop self-policing is another dead end, it is important to remember how this crisis has evolved over too many decades. Local police and media — with the decline of newspapers this often means, as it has in Buffalo, New York, local television news — can no longer be counted to overlook bad behavior among church leaders. Police raids on church offices from Dallas to Saginaw, Michigan, emphasize that law enforcement can no longer be relied upon, as the opening scene in the movie "Spotlight" dramatized, to ignore or catch and release clergy who commit crimes. State attorney generals around the country have also discovered that there are political and legal rewards to uncovering church-sanctioned crimes. (See Pennsylvania.)

The media spotlight remains vital. Whoever leaked information to The Washington Post about the investigation by Archbishop William Lori into retired Bishop Michael Bransfield of Wheeling-Charleston, West Virginia, did the church a great service. The leaks guaranteed that the monetary gifts spread around Bransfield's fellow bishops, including Lori himself, would not go unnoticed. Lori has since apologized.

So who is watching the shepherds? Large bishops' meetings create the temptation to view the church as hermetically sealed from the rest of the world. The illusion is that great decisions are formally enacted to address a waiting world, anxious to hear the collective wisdom of church leaders. But that day is long gone. The hope remains that the bishops realize that the solution involves more than just senior shepherds and the decisions they made in Baltimore last week.

The continued awareness of law enforcement and journalism, as well as the vigilance of the people of God, is the best guarantee we have that this scourge of sex abuse and cover-up may finally be lifted. Cops, reporters and people in the pews remain the most effective monitors of the shepherds. Our best guarantor remains that the outside world is still watching.

A version of this story appeared in the June 28-July 11, 2019 print issue under the headline: Who watches the shepherds who watch over the sheep? Us..