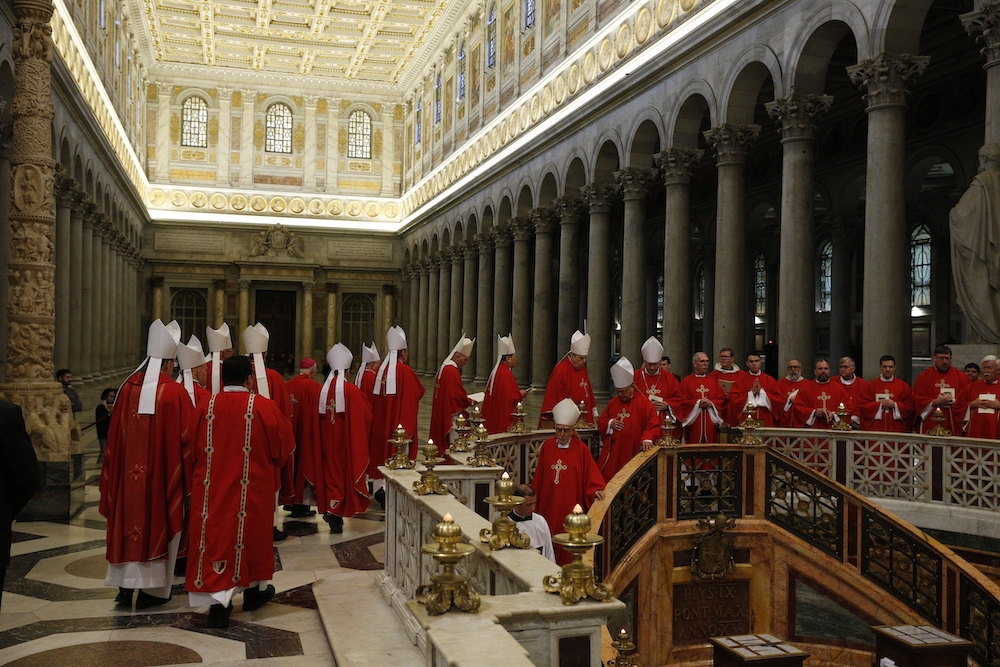 Bishops from Arizona, Colorado, New Mexico, Utah and Wyoming walk in procession to pray at the tomb of St. Paul after concelebrating Mass at the Basilica of St. Paul Outside the Walls in Rome Feb. 12, 2020, during their "ad limina" visits to the Vatican to report on the status of their dioceses. (CNS/Paul Haring)

Pope Francis' new system to evaluate allegations of sexual abuse or cover-up against individual Catholic bishops, which went into effect in June 2019, is admirable. For the first time in millennia — quite literally — there is an active process in place to hold prelates accountable should they fail in their duty to protect children or vulnerable adults from clerical predators.

But after two years, it is clear that the process — which involves the Vatican empowering archbishops to conduct investigations as necessary in their local regions under the norms of the papal motu propio letter Vos Estis Lux Mundi — requires significant improvement.

First on the docket should be a substantial increase in transparency about which bishops are being investigated, what the accusations being brought forward involve, and who exactly is doing the investigating.

Second up is something that, three decades into the church's continuing abuse crisis, many would have reasonably thought the Vatican should have understood by now: lay experts must be involved in all investigations.

Bishop Steven Biegler of Cheyenne, Wyoming, has had up-close experience with both issues. Soon after being appointed to lead his diocese in 2017, Biegler reopened an investigation into allegations of abuse against one of his predecessors, Joseph Hart.

As correspondent Christopher White reports, Biegler's investigation, led by a lawyer experienced in abuse cases, found the claims against Hart "credible and substantiated." But after Biegler forwarded the issue to Rome, the Vatican's Congregation for the Doctrine of the Faith determined, without the help of any outside experts, that the allegations against Hart could not be proven.

Perhaps the clerics at the Vatican who reviewed the case knew better than the lawyer, and better than Cheyenne's diocesan review board, which had also examined the allegations against Hart. You can color us skeptical.

While the norms of Vos Estis envision that prelates may ask lay experts to be part of investigations against bishops, they do not mandate it, either at the local level or at the Vatican. This is a dire omission. Given the mistrust the church has earned over these decades, many will rightly never trust a process that does not, by default, involve lay experts.

Bishop Richard Stika of Knoxville, Tennessee, has an altogether different — but likewise instructive — experience with the new investigative process for prelates. In April, the upstart Catholic blog The Pillar claimed Stika is likely being subjected to a Vos Estis investigation, allegedly over whether Stika had properly investigated accusations against one of his diocese's seminarians.

The blog's source for the news? An unnamed "senior Vatican curial official close to the Congregation for Bishops." Beyond the failure of basic "Journalism 101" ethical standards for the sourcing of news items, the incident reveals how the Vatican's continued lack of transparency about bishop investigations is ultimately self-destructive.

In the two years Francis' new process has been active, there have been exactly zero announcements from the Vatican about which bishops are being investigated. Thanks to some disclosures by local dioceses and the work of journalists (unsourced blog items discounted), we know of at least six inquiries. But none has been properly announced, and status updates are rare.

This dearth of openness is likely due to the Code of Canon Law's strict provisions for the protection of peoples' reputations against illegitimate attacks. And the Vatican may sensibly not wish to comment on investigations until they are past their initial stages, with some understanding of the facts at hand.

But, simply put, the people of God are owed notice when one of their shepherds is on the dock for possibly abusing or covering up the abuse of children. And, paradoxically, the lack of transparency about ongoing investigations of individual bishops harms the reputations of all the prelates. At the moment, any website can claim a bishop is being investigated, even without proof. Who will be able to say they have it wrong?

Vos Estis was enacted by Francis two years ago on an ad experimentum, three-year basis. As Mercy Sr. Sharon Euart, a renowned canon lawyer, said: "The document is valuable, but … it needs to be modified."

Two immediate modifications should be obvious: mandating involvement of lay experts and dialing up the transparency.

Related: 'Vos Estis' expires in one year. What works and what changes are needed in version 2.0?