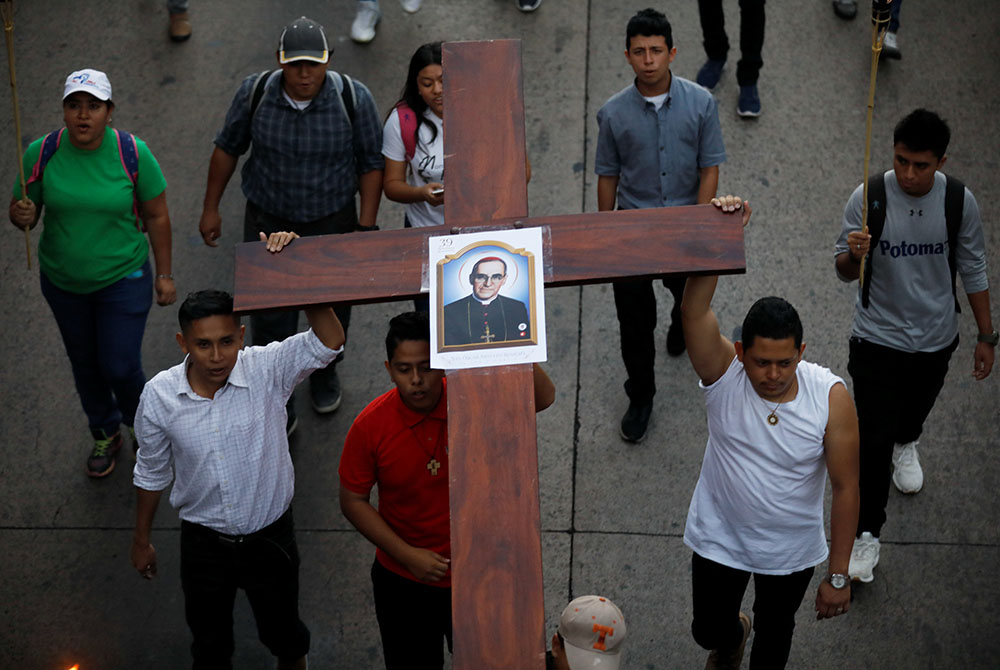 People participate in a March 23, 2019, procession to commemorate the 39th anniversary of the murder of St. Oscar Romero in San Salvador, El Salvador. The Salvadoran saint was shot and killed March 24, 1980, as he celebrated Mass. (CNS/Reuters/Jose Cabezas)

Generación Romero (Generation Romero, in Spanish) was created in 2015 as a network of faith communities, social movements and groups of young activists who identify with the prophetic voice of Romero, the archbishop of the capital of San Salvador, who was murdered in 1980.

Romero, an outspoken critic of military oppression during the lead-up to El Salvador's bloody civil war, was shot dead while celebrating Mass. Although his sainthood cause languished for decades over concerns about his connection to liberation theology, Romero was beatified by Pope Francis in 2015 and finally canonized in 2018.

Andreas Hugentobler, a Swiss-born theologian who is one of Generación Romero's founders, told NCR that the group came together initially at the time of beatification.

"Several popular movements traditionally commemorated the day of his martyrdom, March 24, and wished to coordinate with the church the celebration of his beatification," said Hugentobler. "But we didn't have any response and decided to do our own parallel festivity." 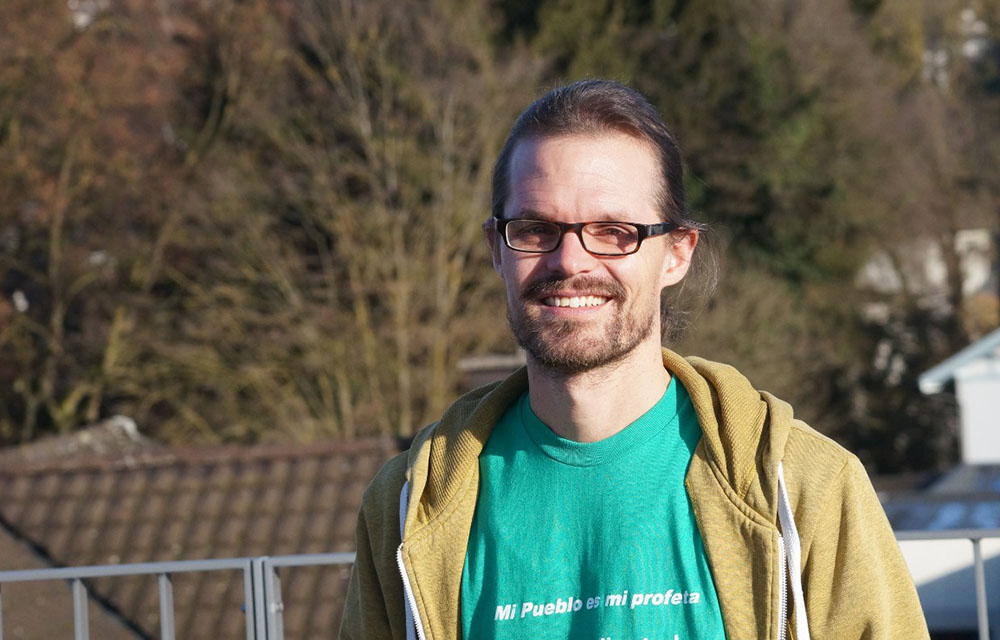 Andreas Hugentobler, a Swiss-born theologian who is one of Generación Romero's founders (Provided photo)

More than 30 organizations decided to spend the night before his beatification in a great vigil. That huge assembly of Romero's devotees ended up generating a fruitful movement, which remained active after the event.

Two years later, in 2017, during the celebration of Romero's centenary, the network officialized its name and its commitment to "follow Romero's steps toward a new society, inspired by the God of the Poor and Jesus Christ the liberator," said Hugentobler, referencing titles for God often used in liberation theology movements.

Indeed, part of Generación Romero's effort is to recuperate the legacy of Latin American Catholicism's social thought and make it available to younger generations.

One of the most important fruits of liberation theology in earlier decades was the creation of base ecclesial communities, or small groups of Catholics meeting for faith development and to debate social change. (They are often known by the Spanish acronym CEBs).

Sr. Verónica Hernández Alegría, a member of the Apostolic Sisters of the Heart of Jesus who accompanies Generación Romero, said those groups have scarce contact with youth.

"CEBs are something that belong to older people now," said Hernández. "Most of them don't have young members. They're connected to an ancient paradigm and their renovation has been difficult." 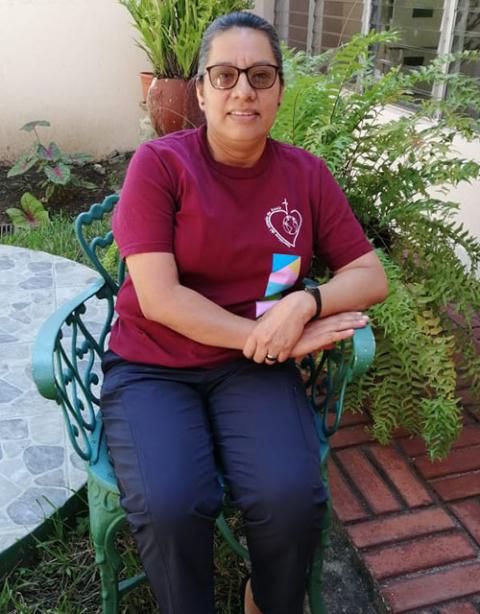 Sr. Verónica Hernández Alegría, a member of the Apostolic Sisters of the Heart of Jesus who accompanies Generación Romero (Provided photo)

Hernández said she hoped Generación Romero might help reunite youth with CEBs, but in a new light. "Romero's figure has a lot to say for the current generations," she said.

The network congregates youth groups from all across the country. A coordinating team works to promote the exchange between the different collectives, to produce weekly bulletins with the movement's views on current events and to organize celebrations in honor of Romero.

The groups read Romero's homilies, reflect on his writings and relate his ideas with their own challenges. The activists are incentivized to interview people and produce video reports for social media and to create artistic works, in which they deal with their communities' problems.

"Our main effort is to promote community organization," said Hugentobler. "St. Romero used to say that a people that's organized is a people that's respected. That's a key idea for us."

But that's not an easy task. Even though Romero has a considerable appeal to youth, to a great extent his canonization meant the suppression of his political and social struggles, said the economist Antonio Barrera, a member of Generación Romero.

"He was elevated to the altars, but much of his prophetic voice disappeared. People prefer to forget that he was a fierce critic of militarism, political corruption and manipulation," said Barrera. "Many theologians have been saying that this is a way of taking out St. Romero's teeth."

There are many Romerian groups that are supporters of Bukele, Barrera said. "Reality has been so obscured by the government that most people lost their critical sense and were deceived by the president," he analyzed. 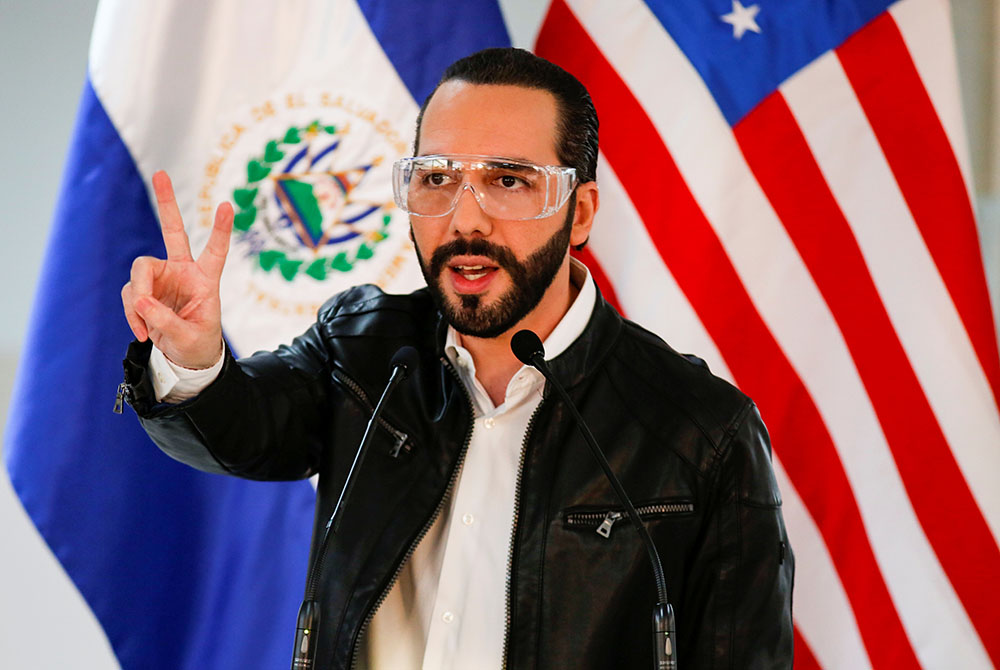 Bukele was elected in 2019 and put an end to almost 30 years of bipartisanship in El Salvador, defeating both the candidate of the socialist party, the Farabundo Martí National Liberation Front (known as FLMN), and the conservative candidate of the Nationalist Republican Alliance (known as Arena).

Bukele's youthful looks and his social media strategy made him a very powerful presence. And his promise to crack down on crime attracted much support.

The president now takes credit for a drop in homicide rates. But he has suffered severe criticism for allegedly having negotiated with criminal gangs, which he denies.

At the same time, Bukele has shown worrisome signs of despotism. The climax of his controversial approach to power came Feb. 9, when he broke into the National Congress with dozens of troops and policemen, while thousands of his supporters protested in front of the building. 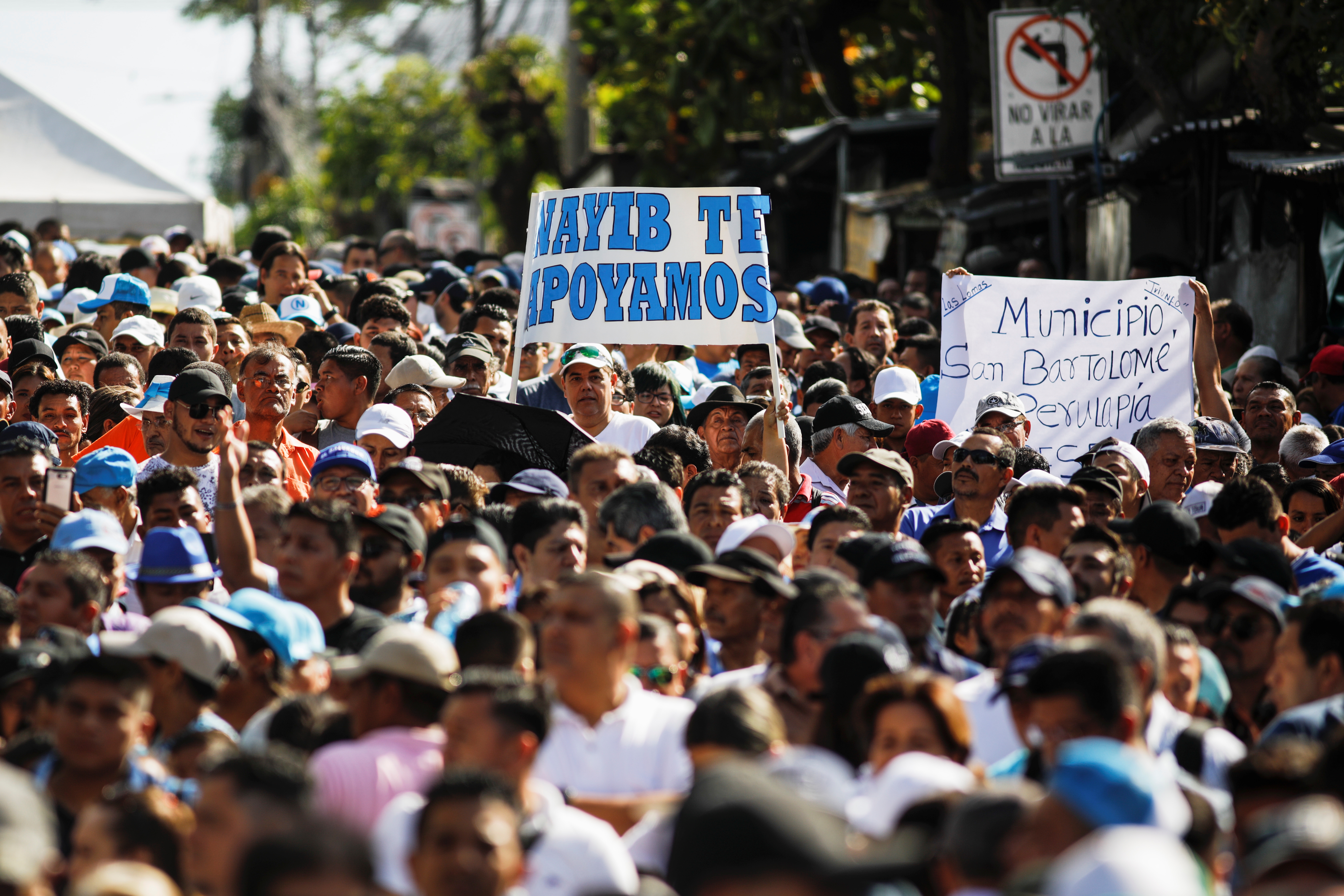 Supporters of Salvadoran President Nayib Bukele protest outside the national congress in San Salvador to push for the approval of funds for a government security plan Feb. 9. (CNS/Reuters/Jose Cabezas)

Bukele had been requesting the legislature's approval of a loan that would be used in his public security plan. The invasion was an extreme form of pressure — and a warning that he was in position to dissolve the Congress if he so wished. Since February, he has had several further confrontations with the country's judiciary and with members of the opposition.

Bukele's management of the COVID-19 pandemic has also spurred controversy, as he incarcerated thousands of people who didn't comply with the government's measures. Members of his administration also were involved in financial frauds related to the purchase of health care equipment.

"It's a very complex situation," said Barrera. "He's a profoundly manipulative leader and is backed by the military. The development of his dictatorship is not something that will happen in the future, it's an ongoing process."

El Salvador will hold congressional elections in February. Barrera said Bukele is seeking to consolidate his control over the legislature, which may lead to further deterioration of the political system.

"It's very hard to sustain a political conversation with most citizens," said the economist. "But we're very respectful and try to show the truth that lies beneath all lies told by the government. That's why we're making an effort to be present on social media."

Despite the criticisms of his administration, Bukele's approval rating is still estimated at more than 90%. Barrera said young people in particular have been seduced by the president, who Economist magazine called Latin America's first "millennial dictator." 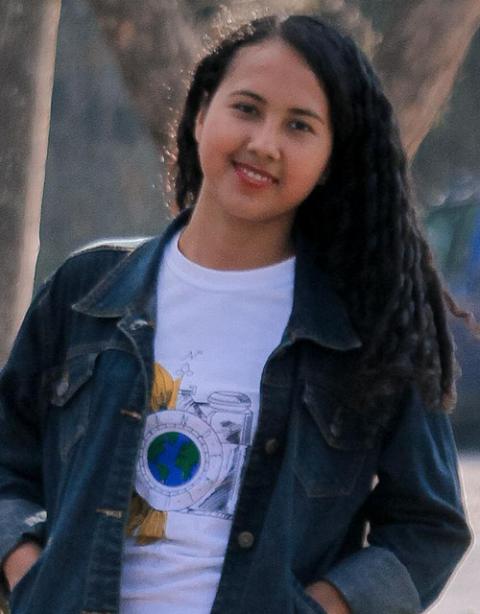 But there may be changes afoot. Denouncement of the real problems in poorer communities may help to change people's minds, said Gelen López, a 24-year-old communicator from La Libertad who coordinates a Generación Romero youth group.

"Despite what the president and the media say, violence still exists in my community," said López. "Many people end up emigrating to the United States and Europe out of fear."

Inspired by Romero's ideas, López offers workshops on video production and stimulates young members of her community to express what they think and to show the reality of their lives through interviews. "Some of St. Romero's homilies seem to be talking about what's going on right now," she said. "He's very alive."

Ecological issues also have been mobilizing many organizations, including the Catholic Church. Generación Romero is one of the movements involved in the campaign for the protection of El Ángel Valley, a region north of San Salvador that supplies several communities with water and is now being considered for several development schemes.

"The state, especially the executive power and the judiciary, is favoring businessmen who want to take hold of the valley," Fr. Luciano Ernesto Reyes García, a lawyer and human rights expert, told NCR.

Reyes said that the campaign to oppose development has attracted a cooperation between Catholics, other Christian churches, social organizations and universities.

Hugentobler thinks that such efforts help build new dialogues in society, leading more people to think critically about issues that impact their own lives.

"We in Generación Romero strongly believe in diversity of opinions," said Hugentobler. "Our goal is not to create even more division in society. What we want to do is to call people to debate in a Romerian way."

Hernández said that neoliberal ideals about the capitalist system are pervasive and have a particularly fierce impact on youth.

"This system is not interested in the critical formation of the youth," said the sister. "Neoliberalism wants young men and women to have a technical education and go to work."

"It's necessary to show other visions to them," she said. "That's why Generación Romero and other networks have to grow."

[Eduardo Campos Lima holds a degree in journalism and a doctorate in literature from the University of São Paulo. Between 2016 and 2017, he was a Fulbright visiting research student at Columbia University. His work appears in Reuters and the Brazilian newspaper Folha de S. Paulo.]

A version of this story appeared in the Dec 25, 2020-Jan 7, 2021 print issue under the headline: Romero inspires young Salvadoran activists.