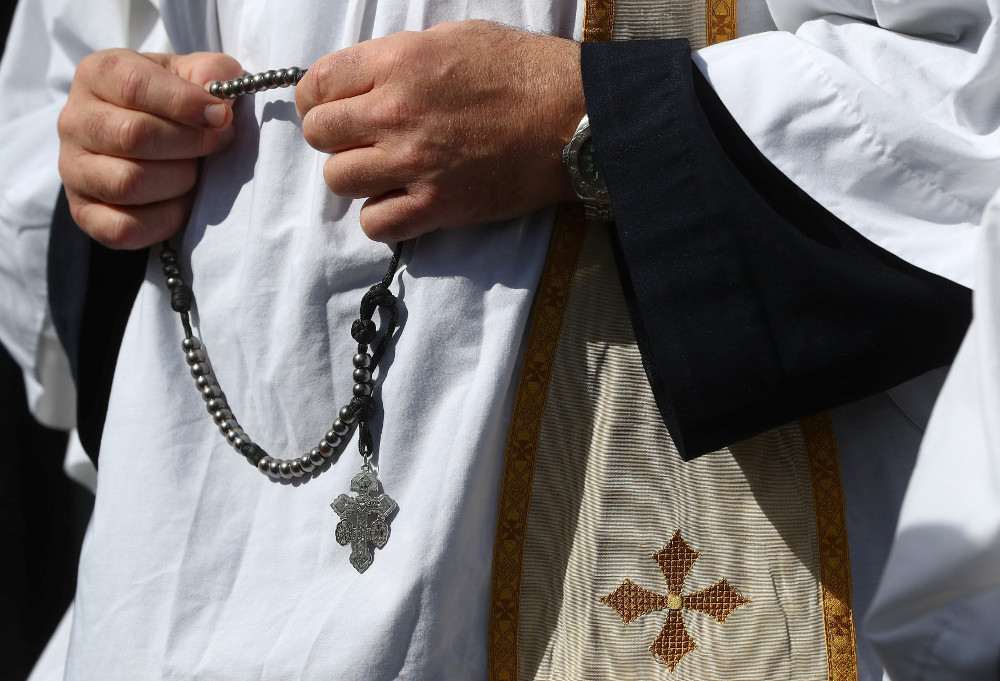 A priest holds a rosary Aug. 24 outside the Pastoral Congress at the World Meeting of Families in Dublin. Sexual and physical abuse by priests and religious and the scandal of its cover-up by church authorities thrive in countries where the Catholic Church is "elitist and clericalist," Pope Francis told Jesuits Aug. 25 in Dublin. (CNS/Hannah McKay, Reuters)

Sexual and physical abuse by priests and religious and the scandal of its cover-up by church authorities thrive in countries where the Catholic Church is "elitist and clericalist," Pope Francis told Jesuits in Ireland in August.

"There is something I have understood with great clarity: this drama of abuse, especially when it is widespread and gives great scandal — think of Chile, here in Ireland or in the United States — has behind it a church that is elitist and clericalist, an inability to be near to the people of God," the pope told the Jesuits during a meeting Aug. 25 in Dublin.

As is customary when the pope meets Jesuits during a foreign trip, a transcript of his remarks to the 63 Jesuits he met in Ireland was published by the Jesuit journal La Civilta Cattolica after the pope had approved the text; it was released Sept. 13.

Pope Francis met the Jesuits in Dublin immediately after meeting eight people who had survived abuse at the hands of priests or in schools, mother and baby homes or other institutions operated by the church or Catholic religious orders.

"I didn't know that in Ireland there were also cases where unmarried women had their children taken away from them," the pope told the Jesuits, referring to the practice at many homes for unwed mothers. "Hearing this particularly touched my heart," he said.

Pope Francis asked the Jesuits for "special help: help the church in Ireland put an end to this. And what do I mean by put an end to it? I don't mean simply turn the page, but seek out a cure, reparation, all that is necessary to heal the wounds and give life back to so many people."

The root of the problem, he said, is elitism or clericalism. The two attitudes foster "every form of abuse. And sexual abuse is not the first. The first abuse is of power and conscience."

In confronting abuse and the church culture that allows it to fester, Pope Francis told the Jesuits, "Courage! Be courageous!"

"This is a special mission for you: clean this up, change consciences, do not be afraid to call things by their name," he told the group.

One of the Jesuits asked the pope for concrete examples of what they should be doing.

Speaking and acting decisively and with authority — for example, in giving a priest an assignment — is not the same thing as authoritarianism, he said. "We need to defeat authoritarianism," but rediscover the virtue of obedience when being sent in mission.