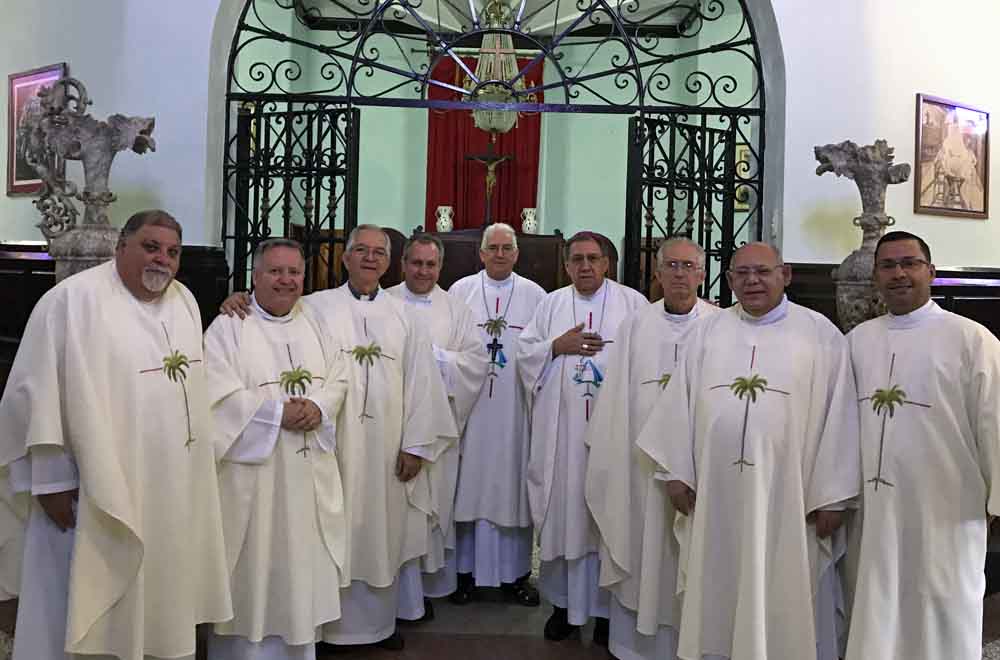 For Catholic Cubans and Cuban-Americans, the bridge-building process began with questions that have underscored their division for decades: Why did you leave? Why did you stay?

Encuentro Eclesial, an event that unites a group of Cuban bishops, priests, women religious and laypeople in the United States and Cuba, has offered Cubans and Cuban-Americans the opportunity to confront these questions and beyond. After more than 20 years of this kind of connection, suspicion between the two groups has turned into trust and friendships.

"The church people in Cuba did not know the church people in Miami, so we needed to break a lot of barriers," said Guillermo Fernandez, a church historian who teaches at Belen Jesuit Preparatory School in Miami, who is also involved in Encuentro Eclesial. "And that has proved to be very positive for them and for us."

Division between Catholics in Cuba and the U.S. exile community were entangled in the wrenching events surrounding Fidel Castro’s rise to power in 1959, embrace of communism and decision by tens of thousands of Cubans to leave. Catholics in Cuba suffered decades of repression that eased in recent years. The prevailing view among U.S. exiles, particularly espoused by a vocal segment of the exile community in Miami, was that essentially anyone who stayed in Cuba was an active or tacit supporter of the regime.

Roughly 40 participants gather sometimes twice a year, sometimes yearly or longer depending on logistics. Of that group, about 12 to 15 are Catholics who still live in Cuba.

"I'm sure [Cubans] were afraid [Cuban-Americans] would laud over them, like 'Oh, here we are; we know more than you, and now we're going to go teach you how to be,' " said Fr. Juan Sosa, a Cuban-American priest who coordinated the first encuentros ("gatherings").

"We got over that. We knew that in order for them to be a church, just offer resources. 'We'll help you be who you are, whatever you need.' ''

"I always ask people here, how can you criticize something you don't even know about? You have to live what's going on there before you criticize anything," said Sosa, who fled Cuba at age 15 through the Miami Archdiocese-sponsored Operation Pedro Pan program in the early 1960s, which brought thousands of unaccompanied minors to the U.S. from Cuba.

Two years after the 1959 revolution, Cuba expelled 131 priests and nationalized Catholic schools, prompting hundreds of priests and consecrated religious to leave. So began generations of "unchurched" Cubans, with an estimated 10 percent of baptized Catholics in Cuba regularly attending Mass.

"Disagreements gave rise to misunderstandings and separations over the years," between those who sought refuge from the revolution and those who continue to live it, said Laura Maria Fernandez, secretary of the Cuban church's coordinating team for the encuentro.

Sosa, now the pastor at St. Joseph Catholic Church in Miami Beach, said that by 1987, "This whole ordeal with Cuba and Miami churches was very hot," eventually reaching Cuba's then-Cardinal Jaime Ortega several years later. He encouraged a dialogue between the two churches, with bishops appointing delegates from the Cuban churches, and delegates from wherever there were Catholic Cubans in the U.S. (mostly from Miami).

The gatherings began with "the need to know and understand each other better, trying as much as possible to free oneself of the burdens that, consciously or unconsciously, put ideologies within people," Fernandez said. "We managed to have a first encounter that was full of expectations, unknowns and prejudices."

At first the group met secretly — in neutral places away from Havana and Miami and the hardline anti-Castro rhetoric that fanned hostilities. The first gathering took place in 1997 in Santo Domingo, Dominican Republic, originally with just priests and a bishop in attendance.

"You begin the dialogue with a lot of friction," Sosa said, recalling a "three-minute rule" he established to keep either side from getting carried away when speaking. But once the "argument period" passed, he said, discussions veered toward how the two sides could work together.

The group changed little by little, he said. What began with a handful of bishops and priests has now become a project involving more laypeople than priests, plus Cubans who live throughout the Americas and Spain. 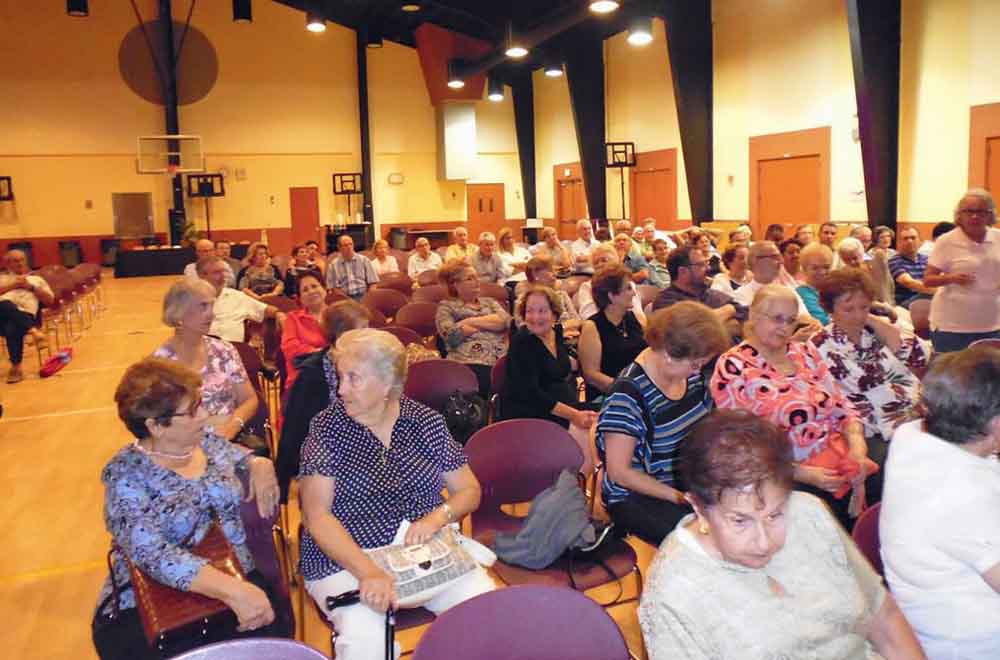 An encuentro in a Miami parish in 2015 (Provided photo)

Despite the changes the group has seen throughout those 20 years — who participates, where they meet, and how honest they choose to be with one another — the intention has remained the same, said Fr. Jose Alvarez: to build bridges.

"The encuentro has been through many phases," said Alvarez, the Cuban-American pastor of the Our Lady of the Lakes Catholic Church in Miami, and who took over for Sosa as one of the coordinators in 2014. "Through everything I hear, in its initial phases, there were a lot of misconceptions on life over there and how the church was functioning there, and life here and how the church functions here.

"There were very acute political sensibilities back in those days, and as the encuentro has evolved and as its participants have seen more common ground, the political discussions and all that stuff — they don't prevail much these days," he said.

The encuentros typically last a week. The first three days fall on a weekend and are with the invited delegates, with social and prayerful activities and presentations hinging on a theme for that year ("What is the universal church?" for example).

The week that follows is open to the public and takes place at various parishes in the diocese, with presentations on lay movements, what the church is doing, and what the Cuban people have done to contribute, Alvarez said, followed by a social gathering. "Opening it to the general public also is a way of broadening the horizons of those that are interested in coming to know the reality," he said.

"The encuentro is a seedbed of ideas," he said, mentioning that one of the fruits is having participants take the initiative to extend programs, such as lay-led Emmaus spiritual retreats, to Cuba. "Hopefully we inspire action that somehow, someway, gets coordinated."

Guillermo Fernandez, who also teaches at Southeast Pastoral Institute in Miami, said that this process is an intentionally apolitical church activity. "The conversation does not change based on what's going on politically; our aim is to help the church in whatever form we can."

That kind of help goes beyond establishing friendships across the Florida Strait: Conversation has led to more consistent communication via the internet and the exchange of periodicals and articles, Sosa said, along with more priests and laypeople visiting the island for retreats, missions, and to teach. The encuentros have also paved way for the reconstruction of Cuban church buildings. Cuban bishops presented projects to Miami's then-Archbishop John Favalora, who would then pass them on to encuentro priest coordinators and a committee responsible for acquiring the funds for the project, Sosa said. Most of them have been completed.

But within the warming relationships, inspiration and perspective is not a one-way exchange. Alvarez noted that in his parish, Cubans who are new to the area come with refreshing mindsets that inspire a different kind of church life.

When young migrants who previously had an active church life in Cuba arrive in the U.S., they want to remain active church members. Instead, they find themselves in a radically different church experience, Alvarez said, transitioning from small, intimate parishes in Cuba to the typical large American parish of sometimes thousands of parishioners.

And their original interest in getting involved in a ministry, he added, might take a backseat to the basic needs that come with a new country: finding a job, feeding your family, driving your kids around. "They discover that life here is far more complicated than they ever imagined," he said.

Therein lies a lesson that the U.S. church can take away from its Cuban counterpart.

"We live in such a litigation-driven society, and we're so consumed by administrative affairs and administrative burdens that a lot of times we say, oh my gosh, the challenge here is how can we not compromise the church's pastoral life in the midst of running these parishes and institutions and whatnot?" Alvarez said.

"They obviously have administrative needs as well, but they just don't have the burdens that we suffer from here. Even in the cities, they have the dynamics of a village church. They seem a lot more approachable than here." 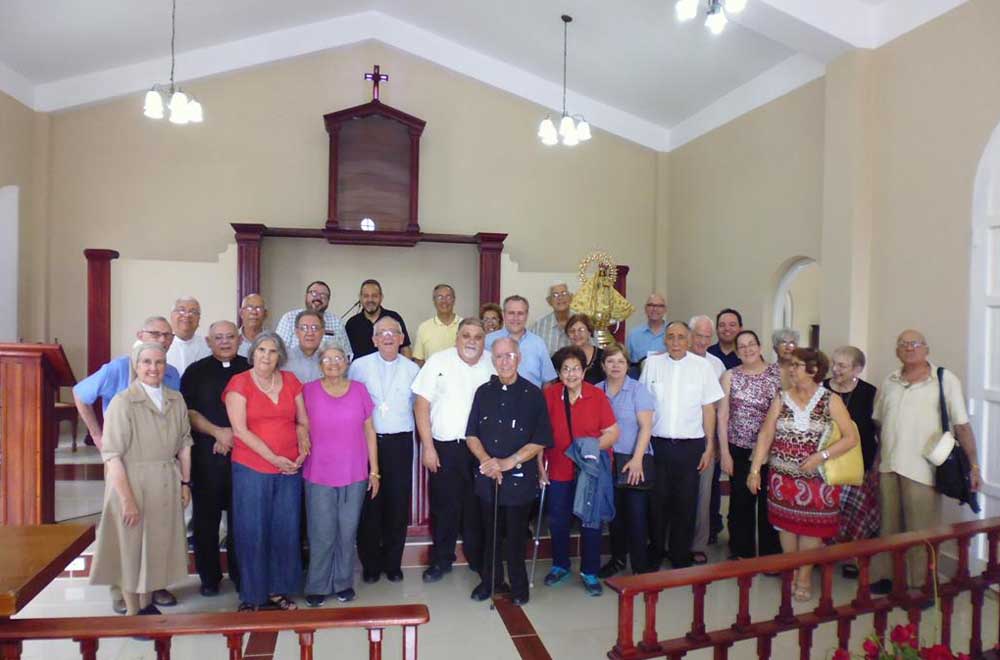 Delegates in the Barajagua Chapel in Holguin, Cuba, 2017 (Provided photo)

What the church in Cuba needs more than anything, Laura Maria Fernandez said, is "trust and understanding from those who have left."

"Sometimes it seems to me that they have forgotten the precarious situation in which we live."

Still, she added, those who participate in the encuentros have established more than just trust with each other; they feel like family, writing and calling one another and always knowing what's going on in each others' lives.

"I believe that we have achieved, with the exchange of criteria, to learn to love ourselves, to respect ourselves, to overcome suspicion, to grow in tolerance," Fernandez said. "Historical barriers of prejudice have been overcome. We have not given up in the face of disagreements. There have been personal changes in mentality, toward greater openness."

Now the group is looking to bring in younger Cubans from the island and the U.S. to continue its efforts. Some point to the growing ties between the exile community and the church in Cuba and wonder if its work is done.

"The church's mission is always to establish bridges, regardless of the politics in place," Alvarez said. "Certainly with respect for authority ... at the end of the day it's all about giving life to the people there. As I reflect on testimonies I hear and experiences I've had, I think [the encuentros] enrich bridges and ties with the Cuban people. Even Bishop Arturo [González of Santa Clara, Cuba] who is overseeing the encuentros, he was saying, yeah, those first years, we were a lot more careful of what we would've said to each other. Now people just speak their minds. And that's significant progress.

"One of the fruits of the encuentros is that it's helped a lot of the participants here. People who never would've gone back to the island have gone back, and now we have familiar faces there, and people who come here now know some people."

Read this next: Where Cuban government can't provide, sisters and Catholic organizations fill the gaps
A version of this story appeared in the May 18-31, 2018 print issue under the headline: Old suspicions turned into trust, friendships.