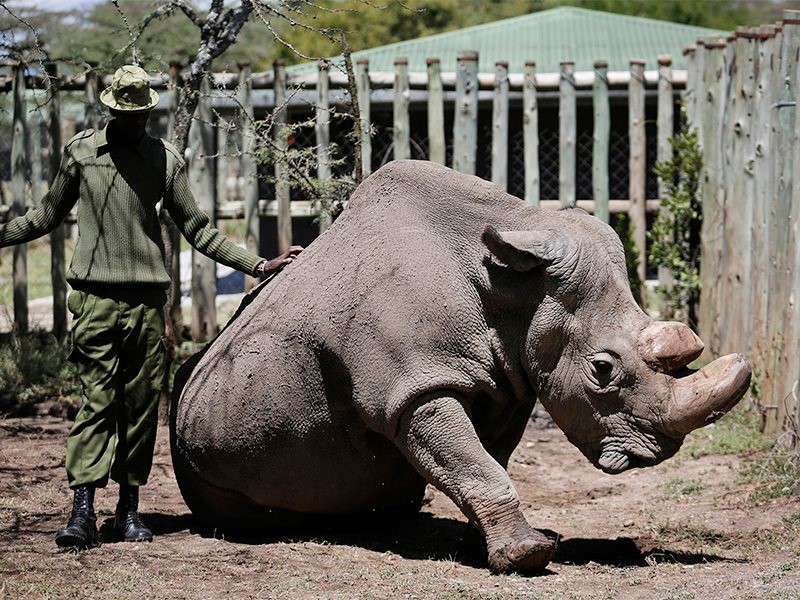 A ranger takes care of Sudan, the world's last male northern white rhino, at the Ol Pejeta Conservancy in Laikipia County in Kenya on May 3, 2017. Sudan died after "age-related complications," researchers announced March 20, 2018, saying he "stole the heart of many with his dignity and strength." (AP)

"We are staring at the extinction of the animal type, under our watch. I think it's a spiritual matter," said Fr. Charles Odira, a Roman Catholic conservationist priest from Kenya, where the rhino lived.

"I feel as if we have neglected our duty as stewards of creation and should have done more for this species."

The 45-year-old rhino – named Sudan – was euthanized Monday (March 19) after suffering an infection and serious complications due to his advanced age. He was kept under armed guard at the Ol Pejeta Conservancy, north of Nairobi, and left behind two female white rhinos  — a daughter and granddaughter.

The two offspring have health problems that mean neither can likely carry a pregnancy to term, and that they will likely die as the last of their kind.

Sheikh Ole Naado, deputy general secretary of the Supreme Council of Kenya Muslims, urged wildlife conservationists to take the lessons from the death of Sudan.

"It is a kind of warning that others are taking a similar path. It could be telling us that something bigger is happening — like the possible extinction of a community," said Ole Naado, referring to the Maasai tribe to which he belongs and whose lands bridge Kenya and Tanzania.

Many Maasai fear encroaching government and commercial interests and the effects of global warming will compromise or obliterate their traditional way of life. But they themselves understand that they must co-exist with wildlife, said Ole Naado.

As religious leaders preach protection of the natural world, some spiritual beliefs are also part of the problem.

Many people in Asia believe that various body parts of rhinos, elephants and other endangered animals possess healing powers or bring luck. Poachers — driven partly by this demand — continue to hunt these species relentlessly.

While a few northern white rhinos roamed Africa wild in the 1960s, by 2008, they lived only in zoos around the world.

Campaigns against the use of elephants' ivory tusks for carving religious objects in Asia have met with some success, but the demand for rhino is still high. In countries such as  Vietnam, a belief that rhino horn cures hangovers and cancer is widespread.

"Religious demand for wildlife products in parts of Asia has been a problem. We have talked to religious leaders in the region about how this is killing our wildlife," said Odira.

"We believe God cannot commission the death of species that he had brought to life," the priest added.