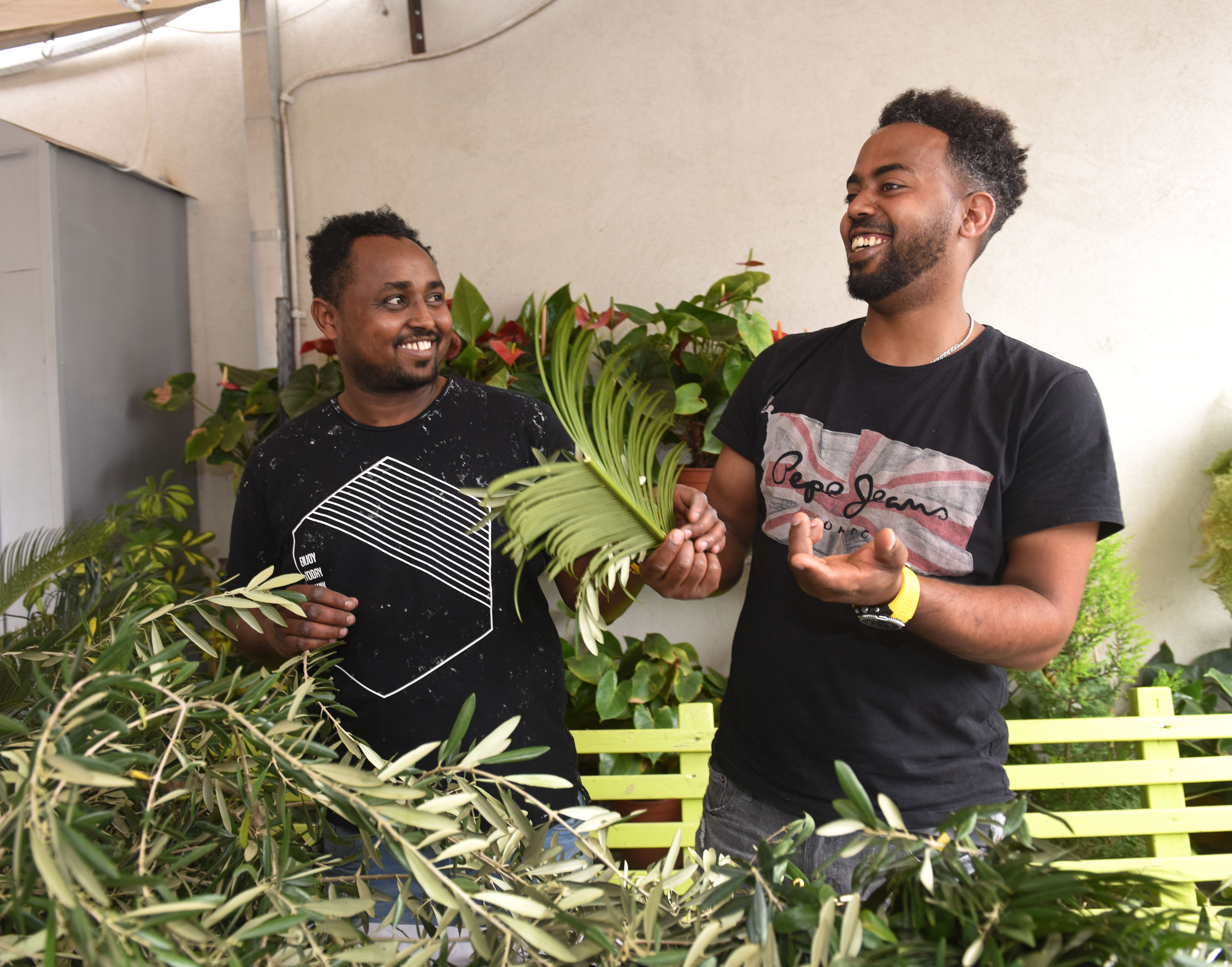 A refugee's life is one of constant uncertainty and confusion.

Yet in their faith the refugees have found strength and refuge, said Father Rafic Nahra, priest of the St. James Vicariate, which ministers to the asylum seekers and migrant worker community in Israel.

Late April 2, Israeli Prime Minister Benjamin Netanyahu suspended a U.N. deal that would have sent thousands of asylum seekers in Israel to Western countries rather than to Africa. The deal had been announced hours earlier, but its reversal did not surprise the refugees.

"The refugees are fearful but, unfortunately, they are used it," Nahra said. "They have already left their country, crossed the Sinai, crossed a lot of dangers and faced a lot of problems. Uncertainty has become part of their life."

Sitting in the courtyard of the Our Lady Woman of Valor Tel Aviv Pastoral Center in late March, two Catholic Eritrean refugees, Abel Kflom, 27, and Musia Daniel, 30, said they do not feel certain of their future.

"If our country was good, nobody would want to leave. But because it is a dictatorship, everybody wants to leave," said Kflom, who has been in Israel for six years. "Of course, I am worried they might send me (to Rwanda)."

Both men fled during compulsory military service in Eritrea, which kept them away from their families for years. In the army, they said, people become like slaves to the commanders. Some men are forced to serve in the army until their 60s. There is no time limit to the service; people cannot decide when to leave.

Neither had intended to come to Israel. Kflom was kidnapped by members of the Rashaida Bedouin tribe, who took him and his friends from Sudan into the Sinai Desert, where he was brutally tortured for four months until his family was able to pay $19,000 in extortion money. He was released at the border with Israel.

During his captivity, his childhood prayers sustained him, he said.

Now, early every Saturday morning, Kflom walks with his wife and young son to the pastoral center for a traditional three-hour Eritrean Mass.

"I pray to God to help me," he said. "Life is very difficult. You can't look forward to your future. You don't have permission to live here. You can't organize your life here. I am always under a lot of stress."

Netanyahu has said he wants to deport 20,000 refugees -- whom he maintains are mainly economic migrants -- by the year 2020. If his original deportation plan is implemented, the deportation process will require single adult males to choose between a financial incentive for "voluntary deportation" to a third African country or indefinite incarceration.

Israel is not alone in struggling with a deportation policy. Countries such as Australia, Germany and Greece have implemented similar deportation policies, including financial incentives for refugees to leave or face incarceration. Following the October 2016 European Union declaration of "safe zones" in Afghanistan, other countries began to deport Afghan refugees. France will be debating a controversial migrant deportation bill in April.

"If you are married or not married, it won't make a difference," said Daniel, whose wife will give birth to their first child in mid-April. "They say they won't deport someone who is married, but they are making a lot of pressure so you will go to another place."

Without hesitating, Daniel and Kflom said they would choose incarceration over deportation to Africa.

"To sit in jail is nothing for me. I have been through worse," said Daniel. "You do not know what an African country is. There is no democracy there, no one to look after us. Someone can take you and kill you and no one will know. It would be easier to return us to our country. So why are they sending us to Rwanda? It shows you that they know there is a problem with our country, and our lives are in danger if they send us back there."

Today an estimated 38,000 adult refugees remain in Israel, the large majority from Eritrea and about 20 percent from Sudan; smaller percentages come from other African countries.

According to the Hotline for Refugees and Migrants, of the more than 13,700 applications for asylum submitted by Africans, only 10 people have been given refugee status in Israel. Some 200 Sudanese refugees from Darfur also have been granted humanitarian status.

Father Michael Gropse, director of the Tel Aviv pastoral center, said when the refugees come to weekly Mass, their prayers are in earnest.

"I can really feel their prayer of hope," he said. "They are always asking for God's guidance. But in their daily life, they are afraid, sometimes, to go out and be caught by the immigration police. But still their faith and hope is strong, and every Saturday I see it when they attend Mass."

"In Eritrea, I grew up in the Catholic Church," said Daniel, kicking around a soccer ball with a friend's young son as he waited for an afternoon prayer study to begin at the pastoral center. "The moment I come here, I forget about everything until I leave, then reality hits me again."