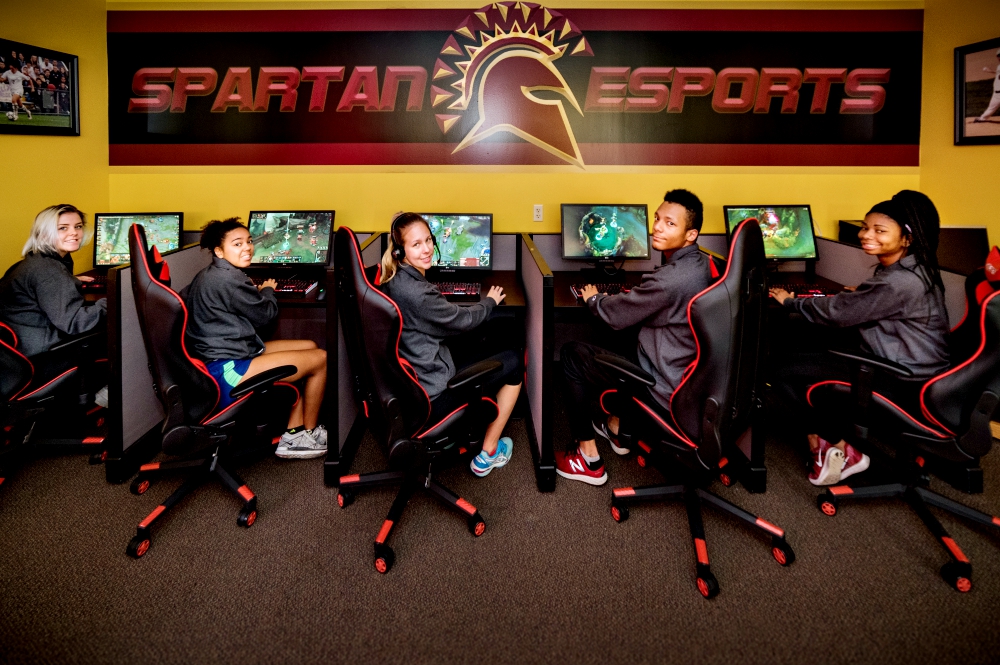 Sophomore Brendan Madden attends football practice at St. Thomas Aquinas College every day from 3 to 6 p.m. He then has a few hours to shower, eat and do his homework before heading to his second sports practice of the day: esports.

St. Thomas Aquinas College in Sparkill, New York, is one of 102 colleges and universities across the U.S. with esports varsity programs. Thirty-five of those schools are religious affiliated, including 11 Catholic universities.

Michael Brooks, executive director of the National Association of Collegiate Esports, said smaller private institutions, many of which are religiously affiliated, are "leading the way in terms of fielding varsity esports programs."

"They identified esports as this untapped opportunity where there was a huge population of young men and young women who esports gaming was a primary interest to," Brooks said. "There was a severe bottleneck at the college level where there wasn't anything readily available."

Newzoo, a market research company, reported the global esports audience exceeded 230 million in 2016 and is expected to reach some 557 million people in 2021. In 2018, an estimated 103.4 million people watched the Super Bowl.

The company also expects esports revenues to hit $1.65 billion by 2021.

St. Thomas Aquinas College originally started esports as a club but the school decided to make it an official varsity sport, adding a coach, designated space and scholarships. By November 2017, the college had a few computers and students were able to practice, but they didn't really get started until January 2018.

The team currently has 17 players, including two recruits, and has spent the past year practicing. Soon they'll start playing in tournaments.

"Now I get the chance to show other people my competitive abilities and show that I'm not just some pushover at some first-year program at a school," Madden said. "Like I've always wanted to do competitive gaming."

Brooks said there are a number of difficulties when adding such a new program. National Association of Collegiate Esports helps schools sort through how to find coaches and players, what games to play, how to make schedules and overall what these programs can look like.

Schools range in number of players per team, with 17 at St. Thomas Aquinas College and about six at College of St. Joseph in Rutland, Vermont. They also range in available scholarships, including no scholarships, and up to $5,000.

Additionally, one school might have teams that play multiple games while another just chooses to focus on one game. 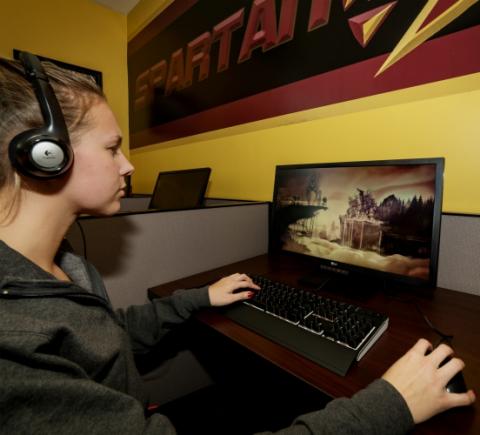 Games like "League of Legends," "Overwatch" and "Fortnite," all of which St. Thomas Aquinas College are playing, are extremely popular. The three games have a fantasy feel to them. But games like "Counter-Strike: Global Offensive," known as "CS:GO," which uses terms like "terrorists" and has players place a bomb to eliminate the other team, have a realistic violence to them, making them controversial in college esports.

Brescia University in Owensboro, Kentucky, has five players listed on its roster for "CS:GO," and assistant coach Matthew Horn is a semi-pro "CS:GO" player, according to its website. But other universities, like Lourdes University in Sylvania, Ohio, have specifically said its esports team won't be playing the first-person shooter game.

"As a Catholic and Franciscan University, Lourdes esports student-athletes will not participate in any video gaming programs that feature first-person shooting," its website said. "This type of video gaming does not add any specific skill that is applicable to an individual's academic studies."

Making a hard rule about first-person shooter games can be difficult. John Shultz, vice president for admissions and marketing at University of St. Mary in Leavenworth, Kansas, said that he's comfortable with any games as long as they don't portray "realistic violence." Meaning a game like "Overwatch," which looks more like lasers than guns, is OK, while "CS:GO" is a no-go.

"A game that might lead to realistic violence just would seem out of place here," Shultz said.

Some schools like St. Thomas Aquinas College and College of St. Joseph have simply avoided it one way or another, instead adding enough games that aren't controversial to keep everyone happy.

But Chris Towle, head coach and director of esports at College of St. Joseph, said gamers understand that when you remove those types of games, you miss out on other aspects of the game that players enjoy.

"It's not about the violence," Towle said. "It's more about overcoming objectives and being able to analyze things on the fly when you're in the mix of things."

Brooks said he's worked with both religiously affiliated and secular schools dealing with this issue. His concern though, is that those who want to play esports at a collegiate level already have limited opportunities and it's an even smaller pool for those into first-person shooter games.

"It's just a concern that, are you limiting opportunities for students who are just interested in different types of games but still in a very highly competitive level?" Brooks said.

He said esports isn't unlike other sports in that people don't just like all sports, they like particular sports. If a player likes "CS:GO," he said, it's unlikely he'll simply switch to "League of Legends" so he can attend that college.

Although the opportunities are small, those who want to compete in "CS:GO" have more opportunities than they did a few months ago. "CS:GO" recently hit the bare minimum, 34 teams, for National Association of Collegiate Esports to start to run college tournaments, Brooks said.

Esports isn't currently part of the NCAA, which means along with creating a new program, many schools have to wade through a mostly unregulated field. It also comes with a strong set of cultural norms, such as playing on Twitch, a streaming site, for money. The NCAA likely wouldn't allow that, but colleges don't seem to have a problem with it.

"We have art students who sell their work on the side," Shultz said. "I just don't see a distinction."

While they don't have a problem with players earning money, their concerns about Twitch often lie with how they present themselves, Shultz said. Harassment has been a known issue on Twitch, with the company tightening its policies in February.

The culture might be different but the rules aren't unique to esports. All athletes must present themselves in line with the university's mission, Shultz said.

"Our football players don't get in fights on the field, they don't talk back to the refs," he said. "We have a tradition of character that our students tend to buy into willingly."

For Madden's coach, Kevin Roth, there have been some unexpected challenges. One of those, he said, is actually limiting the amount of time the players can be in front of the screen.

"The big thing is making sure this doesn't consume them because they are students first," Roth said. "You want them in there because they need to practice but at the same time you start to wonder how healthy it is to have them sitting in front of the screen in a dark room for five hours."

Towle at College of St. Joseph has a solution. He is working with two graduate students to put together individualized physical workout plans, which will include light cardio and yoga.

"Esports by nature is a very sedentary sport," he said. "It's really important to have our players have an active and healthy lifestyle."

National Association of Collegiate Esports also has its own challenges. Currently, recruiting players is a difficult process, Brooks said.

If a coach sees or hears about a player online they might be interested in, all they can see is their username, some data points and their rank, Brooks said.

Coaches have to go into the game to send potential players in-game messages, a time-consuming task. Brooks said they are currently building up databases of potential students but they are just at the beginning of fixing the issue.

There are also fun challenges. At College of St. Joseph, sports teams are known as the Fighting Saints, but they knew esports wasn't traditional and wanted their name to reflect that. Instead, they went with Archangels.

"We had the Fighting Saints on the ground," Towle said. "And then we have the Archangels fighting in the cloud."

Madden wanted his Fortnite team name to reflect their uniqueness. His duo partner at St. Thomas Aquinas College plays football with Madden. Their duo team name is the Hybrids.

"Hybrid: half football, half video games," he said. "Half athlete, half nerd."

A version of this story appeared in the Nov 16-29, 2018 print issue under the headline: Esports arrives: Catholic colleges are among institutions fielding varsity esports programs.