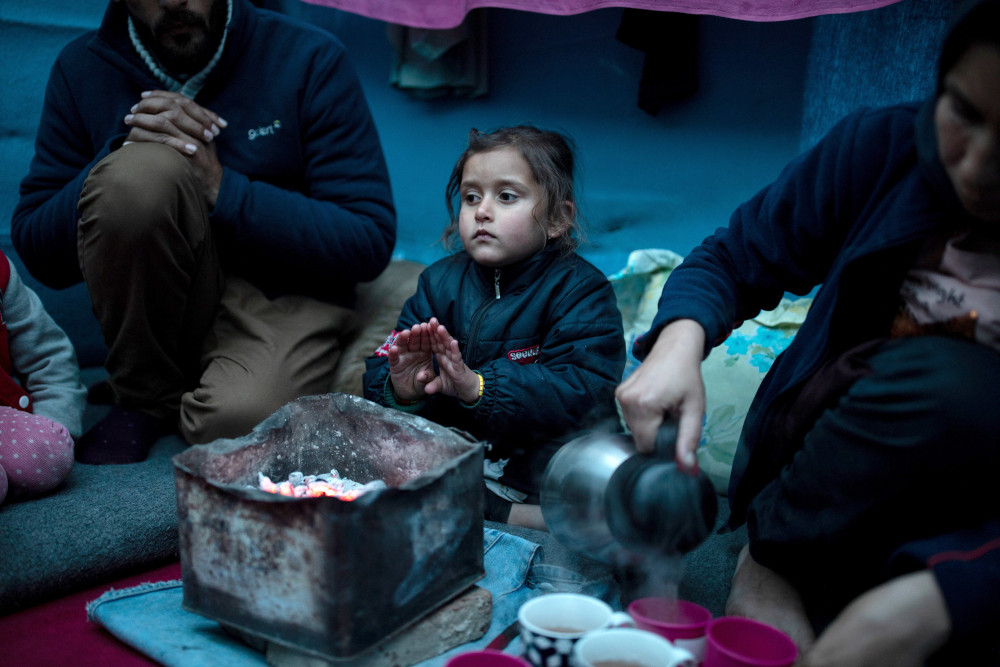 A girl is pictured in a file photo warming her hands over hot coal next to her parents inside their temporary shelter on the island of Lesbos, Greece. The European Union's Catholic bishops called government officials not to abandon families and vulnerable people this winter. (CNS photo/Alkis Konstantinidis, Reuters)

"The misuse of energy as a tool of geopolitical coercion that we are currently witnessing should prompt the international community to find institutional means for an effective, inclusive and equitable global governance of energy; a real and lasting peace will only be possible on a global ethic of solidarity and cooperation," said the Commission of the Bishops' Conferences of the European Union, COMECE.

"As winter approaches, we call on all who bear responsibility in public life not to abandon families and persons who are vulnerable or victims of socio-economic discrimination, unable to cope with soaring inflation and pay for heating or electricity."

The statement was published as prices skyrocketed under the impact of war in Ukraine and international sanctions against Russia after its Feb. 24 invasion.

COMECE said Europe's overdependence on Russian oil and gas imports had allowed Moscow to weaponize energy supplies, intensifying insecurity across Europe, especially for the most vulnerable.

"Many people were already severely impacted by the COVID-19 pandemic, while the energy crisis adds to their economic and mental burden; while some companies are going bankrupt, others are laying off workers, and many people can no longer cope with the rising cost of living," added the Brussels-based commission, which represents around 1,000 bishops from the EU's 26 member-states.

"In this context, we call for collective solidarity. We are mutually connected and dependent on each other, not only as individual persons and families, but also as societies and an international community. Each of us is called to contribute to the concrete expression of this solidarity."

The EU's governing commission has sought to reduce demand and diversify energy supplies in response to Russian attempts to sow divisions and undermine public support for Ukraine by shutting down its main Nord Stream pipeline to the continent.

However, fears have grown that pressure on industry and consumers could fuel recession and social unrest in Europe, while also forcing factory shutdowns and power outages in developing nations.

In its Nov. 7 statement, COMECE warned the Ukrainian-Russian war's "ripple effects" were endangering food production and affordable prices in Europe, as well as worsening insecurity and poverty in the world's poorer countries.

It said the "preferential option for the poor" was "not only a priority in the life of charity of every Christian, but also a social responsibility." Nations should provide regulatory frameworks to ensure energy supplies were available to everyone.

"The public responsibility of the energy sector should be improved by a fair distribution of energy resources, avoiding monopolization by any state, interest group or company to the detriment of poor people and countries who often pay the price of political mismanagement and speculation," COMECE said.

"Considering the current energy crisis and its impact on life, health and human dignity, energy should be managed in a just way so everyone has access to affordable energy. No energy policy is acceptable that fails to deal adequately with basic needs."

EU ambassadors are to debate European Commission proposals for a gas price cap and pool in energy purchasing ahead of a Nov. 24 meeting of energy ministers. Further talks Dec. 19 expected to clear the way for EU-wide emergency legislation before Christmas.

It urged the EU to continue prioritizing energy efficiency and reduction, while increasing research into alternative renewable forms of energy to enable the long-term replacement of fossil fuels.