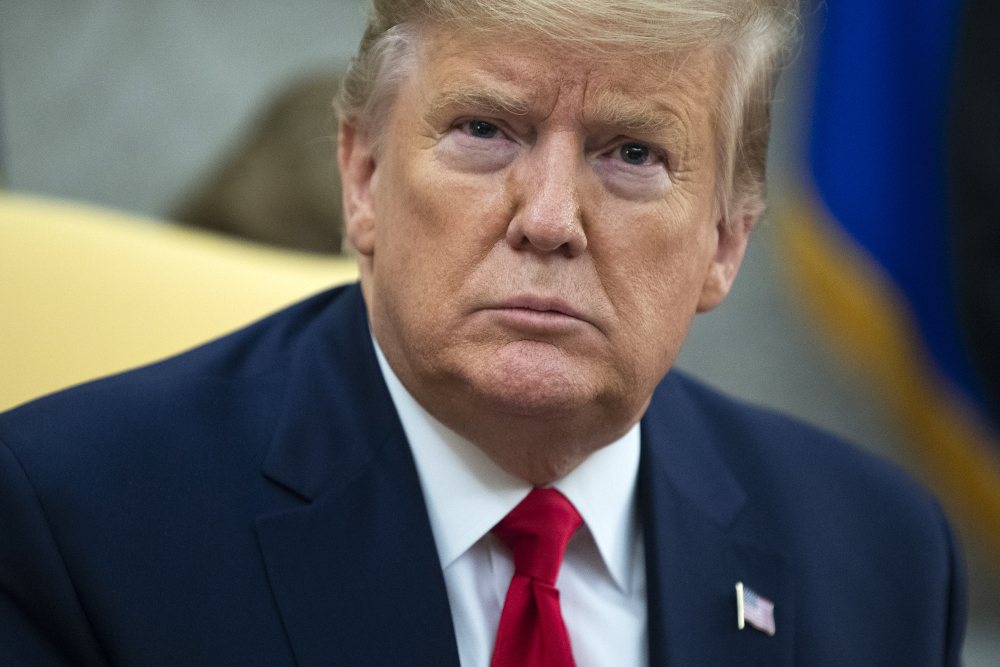 President Donald Trump listens to a question during a Dec. 17 meeting in the Oval Office of the White House, in Washington. (AP/Evan Vucci)

As the political clamor caused by a top Christian magazine's call to remove President Donald Trump from office continues to reverberate, more than 100 conservative evangelicals closed ranks further around Trump on Dec. 22.

In a letter to the president of Christianity Today magazine, the group of evangelicals chided Editor-in-Chief Mark Galli for penning an anti-Trump editorial, published Dec. 19, that they portrayed as a dig at their characters as well as the president's.

"Your editorial offensively questioned the spiritual integrity and Christian witness of tens-of-millions of believers who take seriously their civic and moral obligations," the evangelicals wrote to the magazine's president, Timothy Dalrymple.

The new offensive from the group of prominent evangelicals, including multiple members of Trump's evangelical advisory board, signals a lingering awareness by the president's backers that any meaningful crack in his longtime support from that segment of the Christian community could prove perilous for his reelection hopes. Though no groundswell of new anti-Trump sentiment emerged among evangelicals in the wake of Christianity Today's editorial, the president fired off scathing tweets Friday accusing the establishment magazine — founded by the late Rev. Billy Graham in 1956 — of becoming a captive of the left.

The letter to the magazine's president sent on Dec. 22 also included a veiled warning that Christianity Today could lose readership or advertising revenue as a result of the editorial, which cites Trump's impeachment Dec. 18.

Citing Galli's past characterization of himself as an "elite" evangelical, the letter's authors told Dalrymple that "it's up to your publication to decide whether or not your magazine intends to be a voice of evangelicals like those represented by the signatories below, and it is up to us and those Evangelicals like us to decide if we should subscribe to, advertise in and read your publication online and in print, but historically, we have been your readers."

Among the signatories of the letter are George Wood, chairman of the World Assemblies of God Fellowship; Rev. Tim Hill of the Church of God; former Arkansas governor and GOP presidential hopeful Mike Huckabee; and former Minnesota GOP Rep. Michele Bachmann.

Galli told CBS' "Face the Nation" on Dec. 22 that he views the chances of Trump leaving office, either through a reelection loss or post-impeachment conviction by the Senate, as "probably fairly slim at this point." The editor-in-chief defended his editorial as less of a "political judgment" than a call for fellow evangelicals to examine their tolerance of Trump's "moral character" in exchange for his embrace of conservative policies high on their agenda.

"We're not looking for saints. We do have private sins, ongoing patterns of behavior that reveal themselves in our private life that we're all trying to work on," Galli said Dec. 22. "But a president has certain responsibilities as a public figure to display a certain level of public character and public morality."

Galli referred comment on the Dec. 22 evangelical letter to Dalrymple, who published his own strongly worded defense of the magazine's anti-Trump commentary.

Countering Trump's suggestion that the magazine had shifted to favor liberals, Dalrymple wrote that the publication is in fact "theologically conservative" and "does not endorse candidates."

"Out of love for Jesus and his church, not for political partisanship or intellectual elitism, this is why we feel compelled to say that the alliance of American evangelicalism with this presidency has wrought enormous damage to Christian witness," Dalrymple wrote.

Asked about the editorial's indictment of Trump by "Fox News Sunday," Marc Short — chief of staff to Vice President Mike Pence, himself a prominent evangelical Christian — cited some of the policy positions that have helped endear the president to many in that voting bloc.

"For a lot of us who are celebrating the birth of our Savior this week, the way that we look at it is that this president has helped to save thousands of similar unplanned pregnancies," Short said Dec. 22, adding that "no president has been a greater ally to Israel than this president."

Roughly 8 in 10 white evangelical Protestants say they approve of the way Trump is handling his job, according to a December poll from The AP-NORC Center.

The Trump campaign is planning a Jan. 3 event in Miami called "Evangelicals for Trump.

A version of this story appeared in the Jan 10-23, 2020 print issue under the headline: Evangelical tussling over anti-Trump editorial escalates.