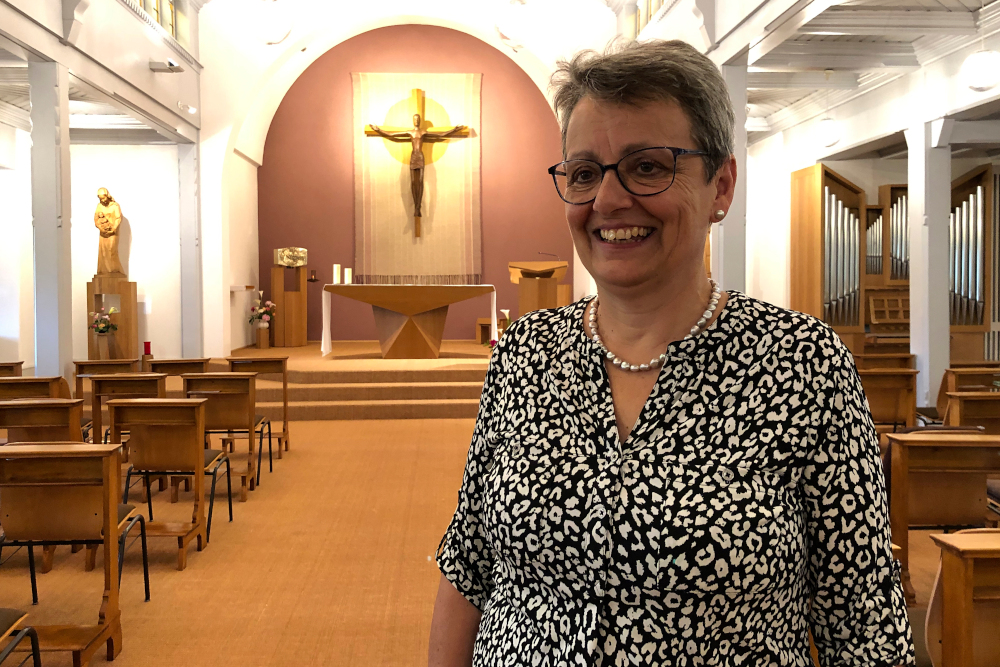 Marianne Pohl Henzen smiles in the Saint Paul sisters church in Fribourg, Switzerland, Wednesday, June 3, 2020. A Swiss bishop's appointment of Marianne Pohl Henzen, a lay mother of three, to a senior administrative post previously held by a priest has raised eyebrows in conservative Catholic circles, at a time when a strengthened role for women in the church is under debate in other European countries. (AP/Nadine Achoui-Lesage)

A Swiss bishop's appointment of a lay mother of three to a senior administrative post previously held by a priest has raised eyebrows in conservative Catholic circles, at a time when a strengthened role for women in the church is under debate in other European countries.

Marianne Pohl-Henzen will serve as an "episcopal delegate" in the diocese of Lausanne, Geneva and Fribourg, and will also be joining Bishop Charles Morerod's episcopal council, the main governance advisory body which is traditionally made up of priests and bishops.

Pope Francis has insisted women should be given greater decision-making roles in church governance. He has recently reconstituted a study commission on whether women can be ordained deacons, but has upheld a ban on women priests and counts no women among his top advisers.

Church conservatives are particularly sensitive to any moves involving women in decision-making roles usually reserved for men, fearing they could set in changes motion that could eventually lead to women being ordained priests.

Swiss church leaders insist Pohl-Henzen's role as "episcopal delegate" for the German-speaking part of the Fribourg canton, or region, will be different from that of her predecessor. He had been an "episcopal vicar," which under church law is an ordained priest whose main task is to help the bishop govern a part of his diocese, including with authority over priests.

Pohl-Henzen, who had been the vicar's No. 2 for years, is simply rising to the top job on Aug. 1. She says she obviously won't carry out key religious duties that only a priest could.

"It's a small step," she said in an interview. "If others steps happen when it comes to women in the church, it will be through men first. For example, perhaps the requirement of the celibacy of priests will fall. The next step could be women as deacons. And maybe far, far later, women as priests."

"But we know many people don't want that to happen so we cannot push much," she added. "We need to take it step by step."

Like many countries in western Europe, Switzerland has seen a steady collapse in the number of Catholic priestly vocations, with fewer than a dozen new diocesan priests ordained each year for the past several years, according to Vatican statistics.

Morerod said his move was about letting "priests do the job of priests" and outsourcing administrative matters to a layperson — irrespective of gender. In a phone interview, Morerod said he hadn't received any "reproach" from the Vatican over Pohl-Henzen's appointment.

Pohl-Henzen said some "not very flattering" comments were made about Morerod after her appointment was announced last month, but added that many in her community have congratulated her over it.

Some conservative and traditionalist Catholic commentators in Italy and the United States have claimed that the appointment is ambiguous, since she apparently will be doing the work of a vicar but with a different title.

But the Rev. Robert Gahl, a moral theologian at the Opus Dei-run Pontifical Holy Cross University in Rome, said the title change is crucial, and Morerod clearly is not making her a vicar.

"Marianne Pohl-Henzen seems to have proven her capabilities in bridging diverse language groups that sometimes have conflicts," he said by e-mail, adding "It's wonderful that she has the confidence of the bishop."

Gahl said her appointment to the episcopal council was also to be welcomed, saying it brings "the possibility to offer a new perspective."

Conservatives' fear has been heightened because of a push in neighboring Germany to open up even more leadership roles to women and an official dialogue process launched earlier this year between Germany's bishops and a powerful lay group that is demanding change.

Even traditionally Catholic France is seeing women increasingly protest their second-class status in the church, fueled in part by clergy sexual abuse and cover-up scandals.

In Lyon, Anne Soupa has made a splash with her unprecedented, symbolic, and self-admittedly impossible bid to take up the post of archbishop left vacant after the resignation of former Cardinal Philippe Barbarin. He was convicted, then acquitted, of covering up for a pedophile priest.

Barbarin resigned anyway, saying it was time for change, and Francis accepted the resignation in January.

"I think there is a blindness problem inside the Catholic Church," she added by video call. "Canon law has been written by men and for men, and it's inconceivable to put women in it. And we are not even given the freedom to think that it could be different."

Soupa has no chance, since the church's in-house law and centuries of doctrine say only ordained priests can be bishops and archbishops, since bishops must trace their lineage to Christ's original apostles.

In addition, one doesn't campaign to be a bishop, since the vetting process is conducted in secret and directed by the Vatican's ambassador in consultation with the country's bishops, for a final decision by the pope.

(Keaten reported from Geneva. Nicole Winfield in Rome and Nicolas Vaux-Montagny in Lyon, France, contributed to this report.)