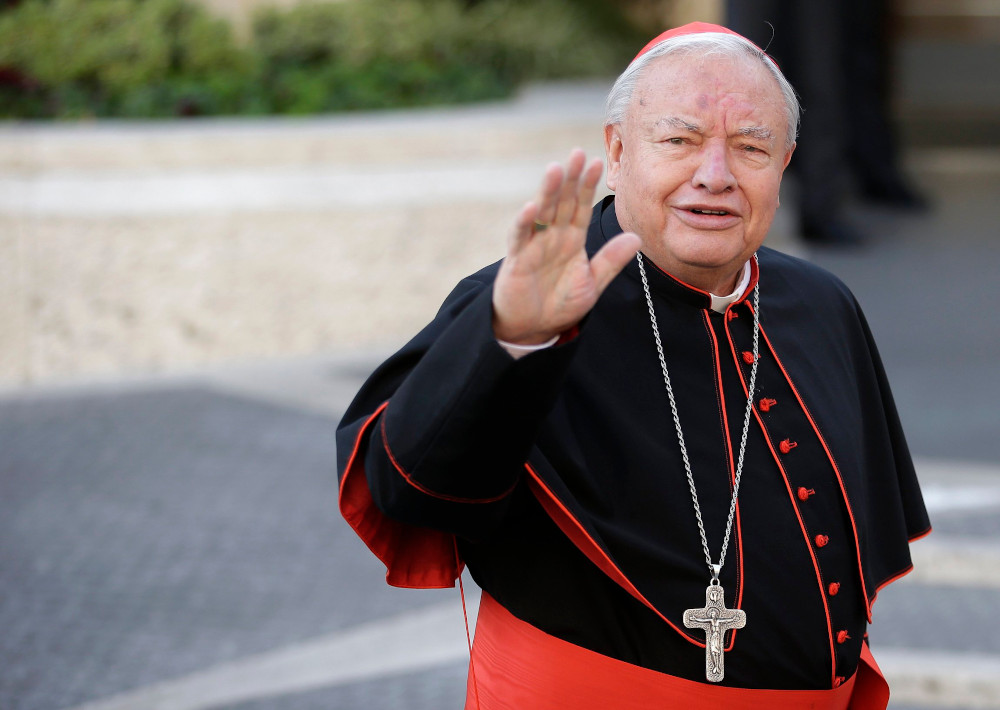 Cardinal Juan Sandoval Iniguez, retired archbishop of Guadalajara, Mexico, is pictured in a March 4, 2013, photo. Facebook has removed a video column by Cardinal Sandoval in which he spreads conspiracy theories about COVID-19 and Bill Gates. (CNS photo/Reuters/Max Rossi)

Semanario Arquidiocesano Guadalajara — an information service operated by the Archdiocese of Guadalajara — posted a screenshot from the video on its Facebook page Jan. 13, along with the text, "Cardinal Juan Sandoval denounced the imposition of a new world order, hours later his video was censored." It also posted the video on its regular website, along with a story on its removal.

The screenshot of the inaccessible video prominently announced, "False information," and explained, "This publication repeats information about COVID-19, which independent fact checkers indicated is false."

In the video — titled "Plot of a new world order" — Sandoval started by saying, "This will go for a long time."

He continued, "This pandemic won't end in a month or two months, perhaps not this year, perhaps not in three, four, five, six years. That's what these men want."

The cardinal mentioned conspiratorially Microsoft founder and health philanthropist Bill Gates and alleged a U.S. laboratory had a strain of another virus ready. He then started speaking of one world government.

Sandoval, 87, has detoured into conspiracies throughout the pandemic and publicly questioned health precautions such as closing businesses and canceling services. He has also minimized the impact of the illness and dispensed erroneous medical advice.

He is currently retired archbishop of Guadalajara — where he was leader for 17 years until his retirement in 2011. Fr. Antonio Gutiérrez Montaño, archdiocesan spokesman, said Sandoval has no official responsibilities in the Archdiocese of Guadalajara and his opinions are his own.

The archdiocese reposted Sandoval's commentary to the website of its newspaper Semanario.

Throughout the pandemic, dioceses across Mexico have closed churches at times, celebrated Mass with limited occupancy and canceled pilgrimages and feast days, including the Dec. 12 feast of Our Lady of Guadalupe at her namesake shrine.

Controversy over the cardinal's comments came as parts of Mexico experienced a worsening of the pandemic, with hospital beds becoming scarce and daily death tolls regularly topping more than 1,000, in a country with very little testing.

COVID-19 has claimed the lives of clergy, too. Gutiérrez said 120 priests — roughly 10% of clergy in the archdiocese — had contracted COVID-19, and eight priests had died of the disease.