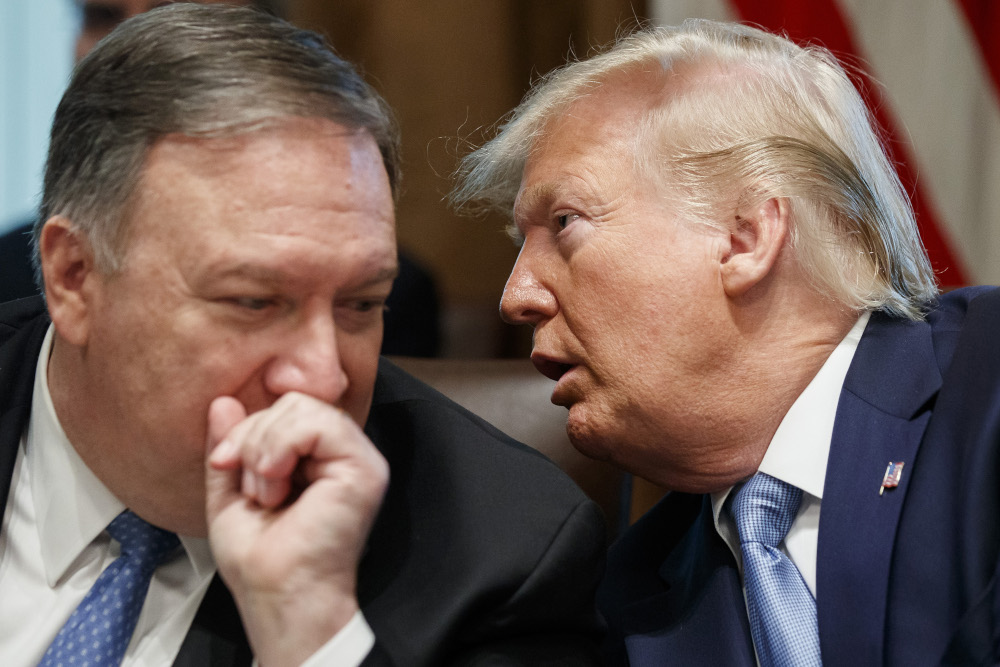 Secretary of State Mike Pompeo, left, and President Trump whisper during a Cabinet meeting in the Cabinet Room of the White House on July 16, 2019, in Washington. (AP/Alex Brandon)

A coalition of 430 human rights, civil rights, foreign policy and faith organizations, leaders and scholars has submitted a letter to Secretary of State Mike Pompeo urging him to dismantle his department’s new Commission on Unalienable Rights.

Organized by Human Rights First, the letter’s signatories include 21 American religious leaders and dozens of faith-based organizations, including the Presbyterian Church (USA), American Jewish World Service, T’ruah, Reconstructing Judaism, the Anti-Defamation League, the National Council of Churches, Muslims for Progressive Values and Catholics for Choice, as well as secularist groups like American Atheists and the Freedom From Religion Foundation.

"(W)e view with great misgiving a body established by the U.S. government aimed expressly at circumscribing rights through an artificial sorting of those that are ‘unalienable’ and those to be now deemed ‘ad hoc,'" the letter reads. "These terms simply have no place in human rights discourse."

Experts in the field of human rights began raising alarms immediately after Pompeo named the chairwoman and 10 members of the commission, which he described July 8 as a panel that would use a "natural law" framework to help guide what the U.S. considers a human right.

Opponents accused Pompeo of using the commission to dismiss rights as they’ve been defined by human rights experts and advocates of minority groups in recent decades.

"The fact that they seem to want to rank human rights, prioritizing some rights over others, resulted in immense concern and criticism that this is in actuality an effort to provide intellectual top cover to what is really an exercise in circumscribing the rights of gay people and laying the foundation for a particular position within the abortion wars," said Rob Berschinski, Human Rights First's senior vice president for policy.

While the commissioners comprised a diverse group of eminent scholars and prominent clergy, their backgrounds largely centered on religious liberty issues and "shared an overwhelming interest in limiting the rights of LGBT people and reproductive rights," Berschinski told Religion News Service.

Several commissioners’ public statements in the past against contraception and same-sex marriage and in support of dictatorial regimes "clearly go against the grain" of current human rights discourse, Berschinski said.

A separate letter sent to Pompeo last week was signed by 125 Catholic theologians and activists –  including Miguel Diaz, a former U.S. ambassador to the Vatican under President Obama – calling for the immediate abolition of the commission.

"Our faith and our commitment to the principles of democracy require us to view every person on earth as a full human being," they wrote. "We staunchly support the fundamental human rights of all people and proudly carry on the long tradition in our country of advocating for expanding human rights around the world."

Muslim activists have also called on Sheikh Hamza Yusuf, a prominent Sunni scholar who is the only Muslim member of the commission, to step down.

But some religious groups and religious liberty groups have applauded the commission. The U.S. Commission on International Religious Freedom’s chairman said the new panel would ensure that the protection of religious liberty is "a core element of strategic policy discussions."

"Among the myriad of problems with these new rights, immorality for one, is that these new rights that are not rights have the inevitable tendency to undermine fundamental rights, like the right to religious freedom, the right to speech, and much else," the center’s president, Austin Ruse, wrote. "We view this new Commission kind of like the cavalry coming to the aid of settlers under siege by savages."

The State Department did not respond to a request for comment.