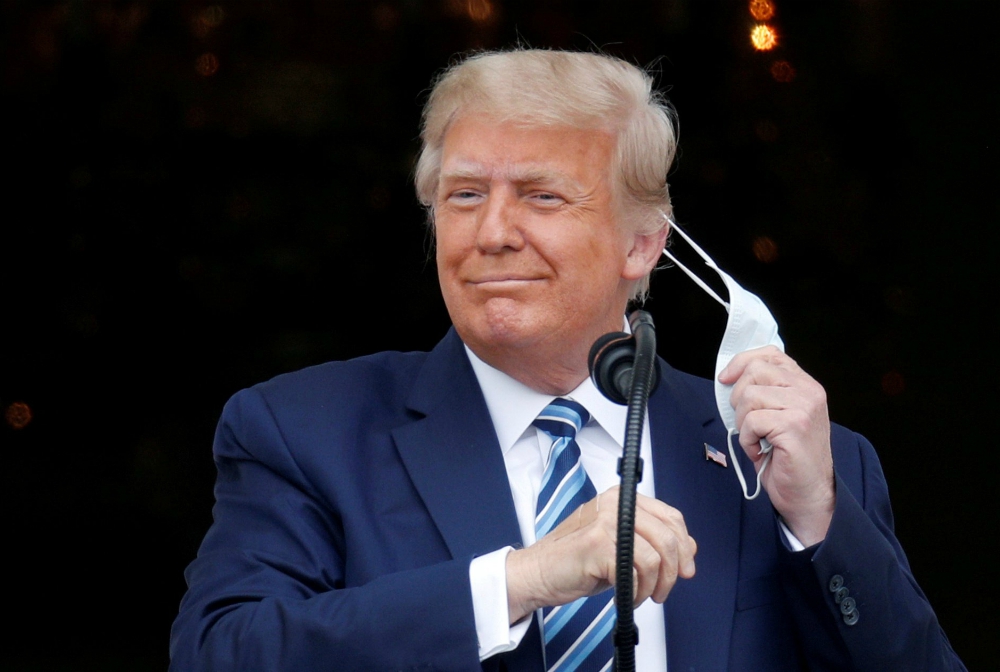 President Donald Trump takes off his face mask Oct. 10 as he comes out on a White House balcony in Washington to speak to supporters gathered for a rally on the South Lawn. (CNS/Reuters/Tom Brenner)

President Donald Trump is so afraid of appearing vulnerable or weak that he will do, say and risk almost anything to appear strong, powerful and in control.

He has refused to support basic public health policies like masks and social distancing. He has blatant disregard for those around him who have contracted COVID-19 while serving his office. He has insisted on holding large campaign rallies without enforcing basic protocols. He took a "reckless" joyride while hospitalized that risked the safety of his Secret Service detail and others. He demanded to be released from the hospital prematurely after contracting the virus himself. And he continues to downplay the severity of a disease that hospitalized him for days and has killed more than 214,000 Americans, all after having confessed to Bob Woodward that he's known all along how serious and deadly this disease truly is.

Why is he doing this?

The simple answer is that he is more afraid of appearing weak, feeble, infirm or, to put it in a simple colloquialism, "unmanly," than he is concerned with the health and safety of the millions of people he is supposed to serve and protect according to his constitutional duty.

He is so terribly frightened of others seeing in him what he knows about himself: his demonstrated incompetence, his lack of business acumen and his charlatan-like treatment of his political base to whom he regularly lies and whom he mocks behind their backs, that he will lash out against others and indulge whatever impulsive thought or action he believes might project some sense of masculinity and strength.

But like the mythical emperor in the Hans Christian Andersen folktale who strutted nude, convinced of his own superior judgment and taste that went unquestioned by the sycophants around him, the only person he is fooling is himself. Even members of his own party cannot pretend any longer and have begun distancing themselves from him, including Senate Leader Mitch McConnell, who has admitted to avoiding the White House for months given the dysfunctional response to the COVID-19 outbreak there.

As Cornell University philosophy professor Kate Manne wrote in The Washington Post last week, Trump is obsessed with "looking manly." He has become the metonymic representation of what psychologists and other experts have termed in recent years the ideology of "toxic masculinity."

In 2018, the American Psychological Association, the largest professional organization for practitioners and scholars in the field of psychology and counseling, released a new set of guidelines for working with boys and men. It was the first-ever publication of guidelines dealing specifically with boys and men because, until recently, maleness was simply, if errantly, considered the norm.

Released during the height of attention on the #MeToo movement, much of the conversation about the American Psychological Association guidance centered on behaviors of bullying and harassment. But one of the most insightful and direct claims expressed in the new guidance states, as The New York Times summarized, "that males who are socialized to conform to 'traditional masculinity ideology' are often negatively affected in terms of mental and physical health."

This notion of "traditional masculinity ideology" is better known in recent years by the expression "toxic masculinity." The American Psychological Association guidelines note that some of the common indicators of this sense of identity include the suppression of emotions, masking distress, maintaining a sense of toughness, and "violence as a means to resolve interpersonal conflict" or display power, among other markers.

In the case of Trump's public statements and behavior in the age of a global pandemic, the ideology of toxic masculinity is the most important factor informing his decisions and behaviors.

As Manne notes, "This hyper-masculine worldview holds that any change in our behavior, any restriction on normal activity — no matter how beneficial and rooted in scientific evidence — constitutes an unacceptable 'retreat.' Taking precautions against catching or transmitting a potentially lethal disease somehow means that we have allowed the virus to win."

It is understandable that an elderly man like Trump, who is 74 and was reared at a time in which there were few models for socially acceptable masculinity, would have grown up with an internalized pressure to appear "tough" and "strong" at all costs. As his niece, Mary Trump, recounts throughout her book Too Much and Never Enough: How My Family Created the World's Most Dangerous Man, such narrowly conceived conceptualizations of masculinity were reinforced by a patriarch — Fred Trump Sr. — who seemed to delight in almost torturing his sons for any perceived expression of vulnerability.

As sad as Trump's childhood may have been and no matter how pathetic his self-delusion has become over the years, the key issue now is that his distorted sense of masculinity and obsession with conforming to some internal norm has serious and far-reaching consequences for others. Manne explains:

The Trump administration has allowed the virus to rage in this country not just because of its incompetence, but also because of the president's toxic masculine ideology, which recasts obstinacy as virtue. Bankrupt machismo feeds Trump's denialism about this disease, whether he's contemplating his own frailty or that of the American people. Whatever it means to be a "real man" (a concept I doubt has any genuine value), it's clear that our era's incarnation of toxic masculinity has little to do with the real strength it takes to protect and serve the community. Instead it's about weakness, and the fearful inability to admit to human vulnerability — and it takes an appalling pride in endangering those around you. 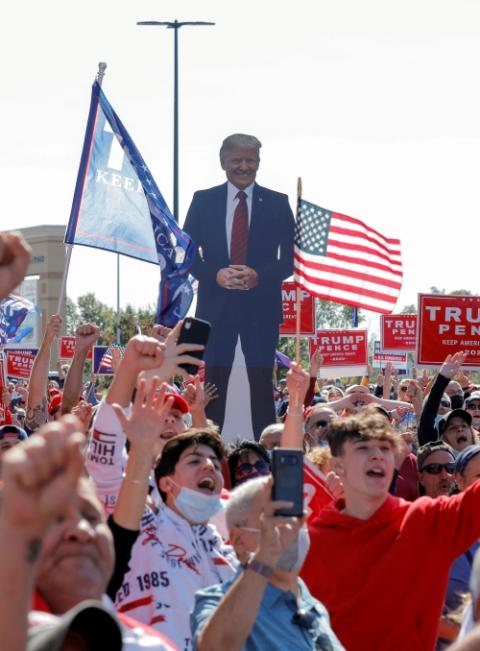 An image of President Donald Trump, who was being treated for COVID-19, is held aloft among supporters during a New York "Triumph Rally" on Staten Island in New York City Oct. 3. (CNS/Reuters/Andrew Kelly)

Not only do we have to contend as a nation with such utter incompetence that has crippled the economy, sickened millions and killed hundreds of thousands of people, and stoked division and hatred, but we also have to think about what the secondary consequences of the president's insecurity have wrought. Namely, we should think about how the current president of the United States is modeling the worst of male behavior — and how there are thousands of equally fragile men, who want to appear "tough" and go on to emulate this bad behavior.

In this way, Trump has again empowered certain individuals — typically, but not always, white men — to embrace attitudes and behaviors that are not only harmful to those around them (especially women and children) but that are also deeply self-destructive. The foreclosure of a healthy emotional and psychological life has serious consequences, including increased likelihood of domestic abuse and intimate partner violence, alcohol and substance addiction, heart attack and stroke, as well as other ruinous outcomes.

The continued belief in and promotion of the ideology of toxic masculinity is a life issue for Christians. In Trump's case, his obsession with being perceived as "manly" and "tough" has increased erratic behaviors and irresponsibility that is itself literally toxic, since it exposes others to a deadly disease. Even after he is gone from office and perhaps from the public square, this sort of narrow and false masculinity will persist.

However, Christians would be wise to look elsewhere for guidance on whether it is masculine or not to accept and acknowledge our inevitable weaknesses and vulnerability. Perhaps a good place to begin is with St. Paul, who understood that the model of identity formation Jesus Christ presented stands in tremendous contrast to other, destructive approaches.

After acknowledging that real strength comes from Christ and not himself, Paul writes: "So, I will boast all the more gladly of my weaknesses, so that the power of Christ may dwell in me. Therefore, I am content with weaknesses, insults, hardships, persecutions, and calamities for the sake of Christ; for whenever I am weak, then I am strong" (2 Corinthians 12:9-10).