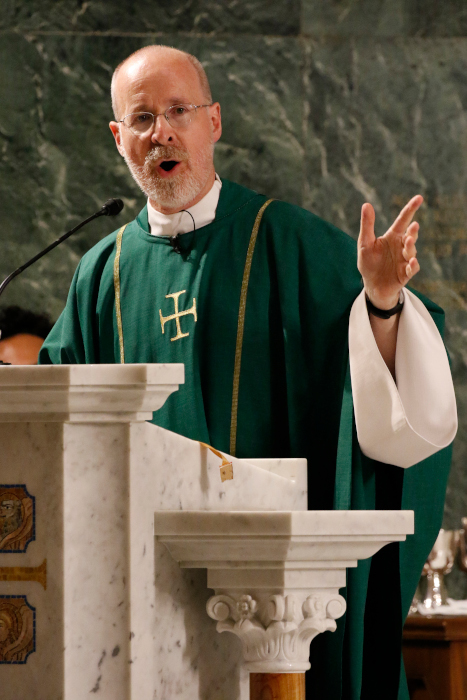 Jesuit Father James Martin, who for the past few years has been writing and speaking about how the church can better minister to LGBT Catholics, brought his message to about 400 Catholic college and university presidents and school officials Feb. 2 at the annual conference of the Association of Catholic Colleges and Universities in Washington.

The priest, who is editor at large at America magazine and author of the 2017 book "Building a Bridge: How the Catholic Church and the LGBT Community Can Enter Into a Relationship of Respect, Compassion and Sensitivity," said he was honored to address the group of campus leaders and pointed out that he was not an expert, a theologian or someone in higher education.

What he could offer, he said, was research he did for his presentation based on discussions with Catholic college and university leaders and LGBT students and faculty members.

During a question-and-answer period that only drew a few questions, he was asked how he responds to those who say he is causing confusion. The priest, who draws big crowds wherever he speaks but also often crowds protesting outside, said: "Read my book."

"I'm not trying to change church teaching," he emphasized. Instead, he said, he encourages Catholics to welcome members of the LGBT community and treat them with sensitivity.

He acknowledged from the start that the issue can be "a contentious topic." "But it need not be," he said, pointing out that Catholic college and university campuses should see those in the LGBT community as "gifted and graced people" in need of care, support and advocacy.

For starters, he told the group in the Washington hotel conference room that their schools should stand with members of the LGBT community as a "visible sign for how much we value their God-given dignity."

This support, he said, stems from the church's long-standing ministry to the marginalized. On this front, he stressed that school leaders need to be aware of how much the LGBT community has suffered — especially from physical or verbal harassment. Citing the U.S. Department of Health and Human Services, he said LGBT youth have contemplated suicide at a rate almost three times higher than straight youth.

He said campuses should welcome LGBT youth groups or programs as a way to provide community and support. He also urged campus leaders to educate themselves and their school communities by listening to the experiences of LGBT people and providing workshops for students and staff to learn about or discuss sexuality and gender issues.

Martin also encouraged education on the Catholic response to the LGBT community, stressing that many Catholics "tend to think the catechism includes simply a restriction on same-sex relations and same-sex marriage."

"It does," he said, but he added that it also includes the "invitation to treat them with respect, compassion and sensitivity and the restriction against unjust discrimination."

He also said: "Church teaching on LGBT people is more than a few lines in the catechism. Church teaching is the Gospel and Jesus' message of love, mercy and compassion, especially for those on the margins. "

The priest also urged school leaders to be in dialogue with their local bishop about their efforts in this area on their campuses.

When a questioner wondered just how many gender-neutral bathrooms a campus should provide, Martin said he did not really know but noted: "There are places that have dealt with this creatively; just provide some," was his quick answer.

Vincentian Father Dennis Holtschneider, ACCU's president, also took the microphone, not to ask a question but to respond to the talk and follow-up discussion, stressing that the session was not about "challenging church teaching" but more about "delving into it."

He said numerous gender discussions are currently taking place and although it is "a difficult conversation," he said it is one that Catholic universities need to be involved in.

"We could use some thoughtful clarity on this issue," he said, stressing the need to include voices of academia and moral theologians.