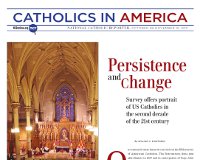 The latest version of American Catholics is the fifth in a series of surveys of Catholic attitudes conducted every six years. Taken together, they make up one of the deepest and most consistent portraits ever compiled of the membership of the country's largest religious denomination.

During the last quarter century, Catholic attitudes and practices, as well as the makeup of the church itself, have changed markedly even as Catholics have maintained a steady conviction about certain core beliefs. Stated in simplest terms, Catholics in the past 25 years have become more autonomous when making decisions about important moral issues; less reliant on official teaching in reaching those decisions; and less deferential to the authority of the Vatican and individual bishops.

The full contents of the report and an explanation of how it was done are contained in a special section of the print version of the National Catholic Reporter and is reproduced here, a total of 13 essays accompanied by a variety of charts and graphs illustrating the findings.


Hispanics and non-Hispanics disagree on a number of issues. One significant difference: 70 percent of Hispanics say helping the poor is important while 56 percent of others say it is. Hispanics also are more traditional in their views of the necessity to agree with church teachings on a range of issues, including remarrying after a divorce and abortion, than non-Hispanics.

According to the survey: "One in five Catholics … says that church leaders such as the pope and bishops are the proper arbiters of right and wrong" in such matters as divorce and remarriage, abortion, sex outside of marriage, homosexuality and contraception, while maintaining that either the individual alone or the individual considering the teaching of church leaders is the proper locus of authority for deciding on such matters.

In a sign that religion as well as politics is local, most Catholics give favorable reviews to the leadership of the U.S. bishops as a whole, and particularly of their local bishops. At the same time, the survey "finds a consensus among American Catholics that the bishops have come up short in their handling of the sex abuse issues," with most Catholics saying the issue has damaged the political credibility of church leaders and impaired the ability of priests "to meet the spiritual and pastoral needs of their parishioners."

The survey was conducted online among a sample of 1,442 self-identified Catholic adults who are part of the Knowledge Networks' KnowledgePanel. (See "About the survey" in accompanying stories for more detail on the methodology of the study.) The interviews were conducted April 25-May 2. The survey has a margin of error of plus or minus 3.5 percent.

William V. D'Antonio, a fellow at the Institute for Policy Research & Catholic Studies at the Catholic University of America, led this fifth survey, as he has all the others. His colleagues this year were Mary Gautier, senior research associate at the Center for Applied Research in the Apostolate (CARA) at Georgetown University, and Michele Dillon, professor of sociology and chair of the department at the University of New Hampshire.