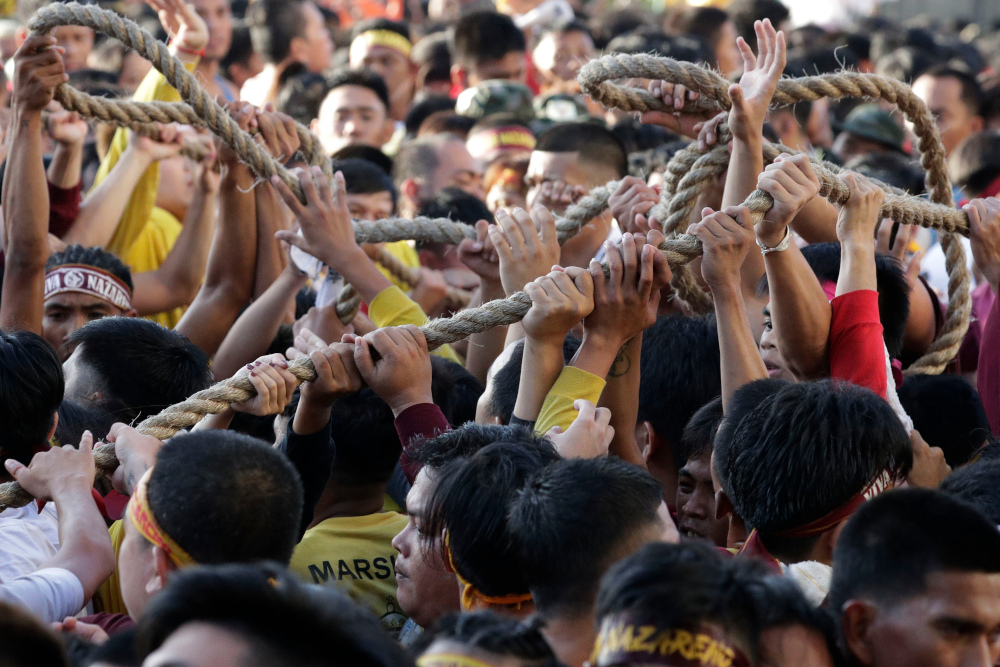 Filipino Roman Catholic devotees jostle to get the rope that pulls the carriage of the Black Nazarene during a raucous procession to celebrate its feast day Thursday, Jan. 9, 2020, in Manila, Philippines. A mammoth crowd of mostly barefoot Filipino Catholics prayed for peace in the increasingly volatile Middle East at the start Thursday of an annual procession of a centuries-old black statue of Jesus Christ in one of Asia's biggest religious events. (AP/Aaron Favila)

A mammoth crowd of mostly barefoot Filipino Catholics prayed for peace in the Middle East on Thursday at the start of an annual procession of a centuries-old black statue of Jesus Christ in one of Asia's biggest religious events.

The daylong procession of the wooden Black Nazarene draws massive numbers of largely poor devotees who pray for the sick and a better life. This year, widespread fears over the conflict between the United States and Iran were highlighted in a predawn Mass.

"Let us remember that in other parts of the world, the threat of violence is brewing and, hopefully, this will not lead to war," Cardinal Luis Antonio Tagle told the crowd at a Manila seaside park.

The popular Manila church leader asked the tens of thousands of devotees clad in maroon shirts — the color associated with the Black Nazarene — to briefly pause in silence and pray for peace in the Middle East and the safety of its people, including many Filipino expatriate workers.

"Let us pray ... that the desire to retaliate eases," Tagle said.

One of the world's leading labor providers, the Philippines would face a gargantuan crisis if hostilities between the U.S. and Iran escalate and embroil other countries that host many Filipinos, such as Saudi Arabia and Israel.

The Philippine government on Wednesday ordered Filipino workers to leave Iraq and Iran. The military prepared to deploy navy ships, three cargo planes and one battalion each of marines and army troops to help the evacuations in case hostilities worsen.

Organizers of the Black Nazarene procession expect up to 4 million people to join the procession, which usually ends late at night when the life-size statue of Christ is returned to a church in downtown Manila.

More than 12,000 police, including bomb squads, snipers and helicopter-borne teams, were deployed to secure the procession, though authorities said they have not monitored any specific threat.

Aside from ensuring safety and order, police worked to clear the streets in front of the carriage bearing the statue. Guns and liquor were banned and cellphone signals were jammed in parts of Manila.

Devotees who were pushed back when they tried to touch the statue complained, but despite the security and the tropical heat, mobs of people dangerously squeezed into a tight pack of humanity around the carriage. They threw small towels at volunteers on the carriage for them to wipe parts of the statue and toss the towels back, believing the Nazarene's powers can cure ailments and do other miracles.

Dozens of people fainted or sustained injuries and were carried away on stretchers by Red Cross volunteers.

Jocelyn del Rosario, a 55-year-old restaurant manager, said she walked barefoot for more than 4 kilometers (2.6 miles) on an empty stomach to show her devotion to the Black Nazarene and pray for her children. Amid the crowd and the heat, she fainted and was carried to a first-aid station.

"My daughter has diabetes and a son of mine has been in and out of jail," del Rosario said while lying on a stretcher. "The Black Nazarene has done miracles for me. I need to pray for some more."

Another longtime devotee, Elena Ornate, believes the Black Nazarene helped her recover from a stroke years ago. But another stroke last December left the 73-year-old widow partly paralyzed, preventing her from working as a food vendor.

"Lord, please give my strength back. My family needs me," said a teary-eyed Ornate, who sat on a wheelchair surrounded by more than a dozen of her grandchildren.

Crowned with thorns and bearing a cross, the Nazarene statue is believed to have been brought from Mexico to Manila on a galleon in 1606 by Spanish missionaries. The ship that carried it purportedly caught fire, but the charred statue survived. Some believe the statue's endurance, from fires and earthquakes through the centuries and intense bombings during World War II, is a testament to its powers.

The spectacle reflects the unique brand of Catholicism, which includes folk superstitions, in Asia's largest Catholic nation. Dozens of Filipinos have themselves nailed to crosses on Good Friday in another tradition that draws huge crowds and tourists each year.

Such religious passion has continued in the Philippines even as President Rodrigo Duterte has stepped up attacks in recent years on the church and bishops, who have criticized the thousands of killings under his anti-drug crackdown. Duterte sparked outrage among many Catholics two years ago when he called God "stupid" and later questioned the basic tenets of the faith. He offered to immediately resign if anybody can prove that God exists.