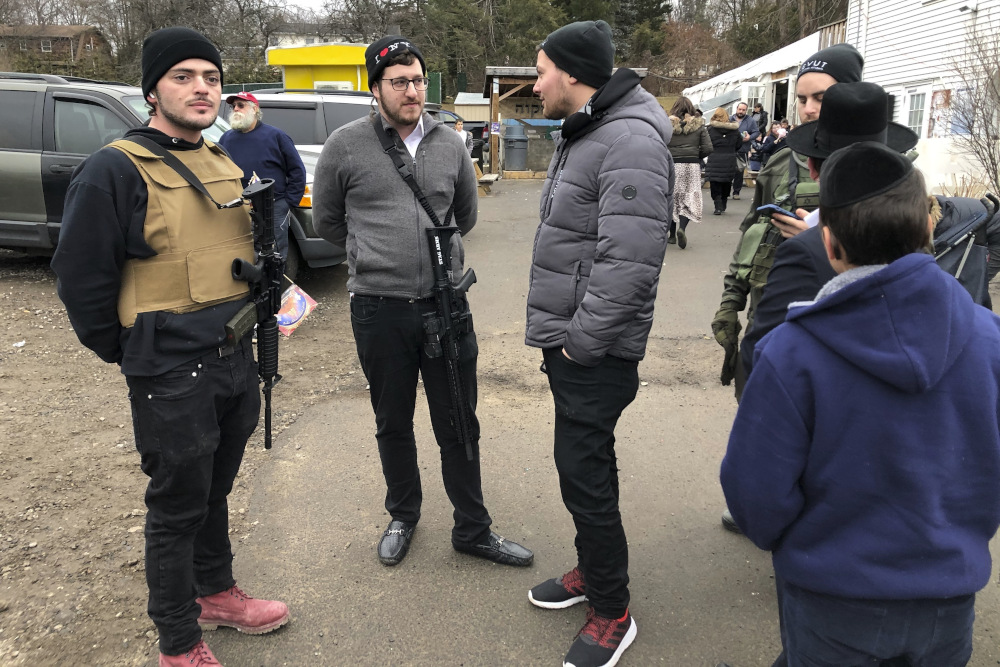 Armed members of the Jewish community stand guard at a celebration Dec. 29, 2019, in Monsey, New York. A day earlier, a knife-wielding man stormed into a rabbi's home and stabbed multiple people as they celebrated Hanukkah in the Orthodox Jewish community. (AP/Ted Shaffrey)

A knife-wielding man stormed into a rabbi's home and stabbed five people as they celebrated Hanukkah in an Orthodox Jewish community north of New York City, an ambush the governor said Dec. 29 was an act of domestic terrorism fueled by intolerance and a "cancer" of growing hatred in America.

Police tracked a fleeing suspect to Manhattan and made an arrest within two hours of the attack Dec. 28 in Monsey. Grafton E. Thomas had blood all over his clothing, smelled of bleach but said "almost nothing" when officers stopped him, officials said.

An automated license plate reader alerted officers that the suspect's car had crossed over the George Washington Bridge into New York City about an hour after the attack. Thomas was stopped and taken into custody about 20-30 minutes later, NYPD Commissioner Dermot Shea said.

Security camera footage the NYPD made public Dec. 28 showed two officers approaching Thomas' sedan with guns drawn before the suspect placed his hands on the roof of the car and he was put in handcuffs.

President Donald Trump condemned the "horrific" attack, saying in a tweet Dec. 29 that "We must all come together to fight, confront, and eradicate the evil scourge of anti-Semitism."

One witness described the attack as a chaotic scene punctuated with panic and screams.

Thomas, 37, was arraigned Dec. 29 and pleaded not guilty to five counts of attempted murder and one count of burglary. Bail was set at $5 million and he remains jailed. He didn't answer questions as authorities escorted him to a waiting vehicle.

Thomas' criminal history includes an arrest for assaulting a police horse, according to an official briefed on the investigation who was not authorized to discuss the matter publicly and spoke to The Associated Press on condition of anonymity. A lawyer representing Thomas at the arraignment said he had no convictions. 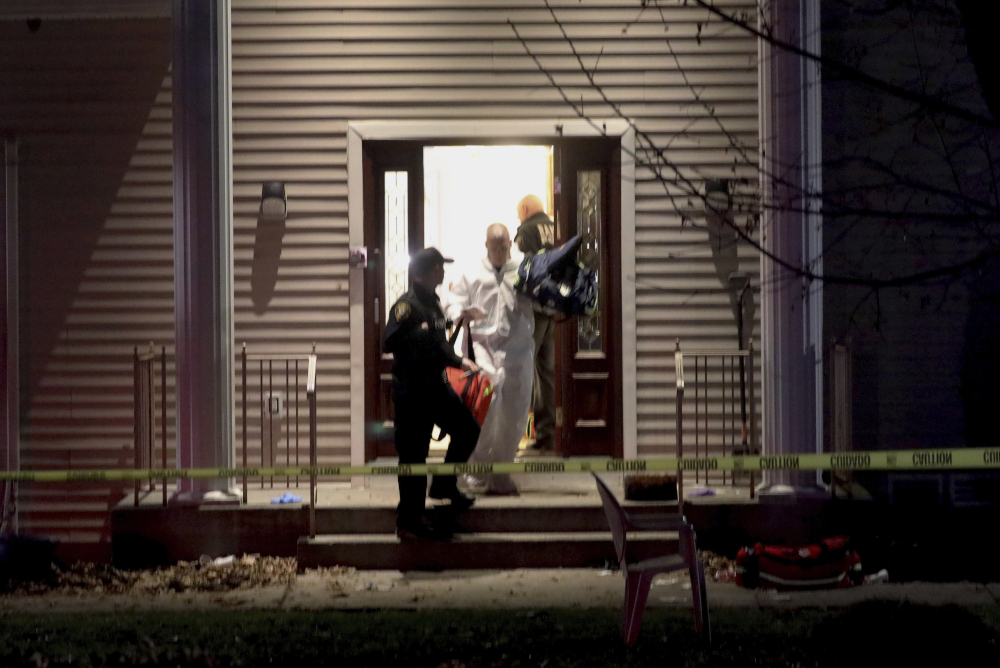 Police work at a residence in Monsey, New York, Dec. 29, 2019, following a stabbing during a Hanukkah celebration. (Seth Harrison/The Journal News via AP)

The Greenwood Lake street where Thomas lived with his mother, about 20 miles (32 kilometers) from Monsey, was blocked with police tape Dec. 29 as FBI agents and police officers carried items from their home.

The FBI is seeking a warrant to obtain his online accounts and were scouring digital evidence, the official said. They are also looking into his mental health history.

The family's pastor, the Rev. Wendy Paige, said Thomas has been suffering from mental illness and that his family believes that condition was the cause of the alleged stabbings — not hatred toward Jewish people. She said his family is sorry for the pain he has caused.

The stabbings on the seventh night of Hanukkah left one person critically wounded, Gov. Andrew Cuomo said. The rabbi's son was also injured, he said. Authorities have not provided a motive and Shea said investigators do not believe, at this point, that any other people were involved.

The attack was the latest in a string of violence targeting Jews in the region, including a Dec. 10 massacre at a kosher grocery store in New Jersey. Last month in Monsey, a man was stabbed while walking to a synagogue.

Cuomo said the savagery was the 13th anti-Semitic attack in New York since Dec. 8 and endemic of "an American cancer on the body politic."

"This is violence spurred by hate, it is mass violence and I consider this an act of domestic terrorism," Cuomo said. "Let's call it what it is."

Ramapo Police Chief Brad Weidel said it was unclear why the rabbi's house was targeted or if a specific ideology motivated the suspect. According to the official briefed on the investigation, authorities do not believe Thomas is connected to recent anti-Semitic incidents in New York City.

Sen. Charles Schumer, D-N.Y., called on the FBI to investigate possible links between the Monsey stabbing spree and other recent attacks. The Simon Wiesenthal Center said it wants the FBI to create a special task force.

"Enough talk, it is time for action to deter those who propagate this hatred," Israeli U.N. Ambassador Danny Danon said.

The stabbings happened around 10 p.m. Dec. 28 at the home of Rabbi Chaim Rottenberg, located next door to his Congregation Netzach Yisroel synagogue. The large house on Forshay Road remained cordoned off with yellow crime-scene tape early Dec. 29. By evening, the tape was gone and a fully lit menorah shone from a window.

"The guy came in wielding a big knife, sword, machete — I don't know what it was," said Josef Gluck, who hit the assailant with a coffee table during the attack.

"He took it out of his holder, started swinging," Gluck said.

The dining room, he said, emptied in split seconds. While inside the home, the assailant didn't say a word as he carried out the attack, he said. 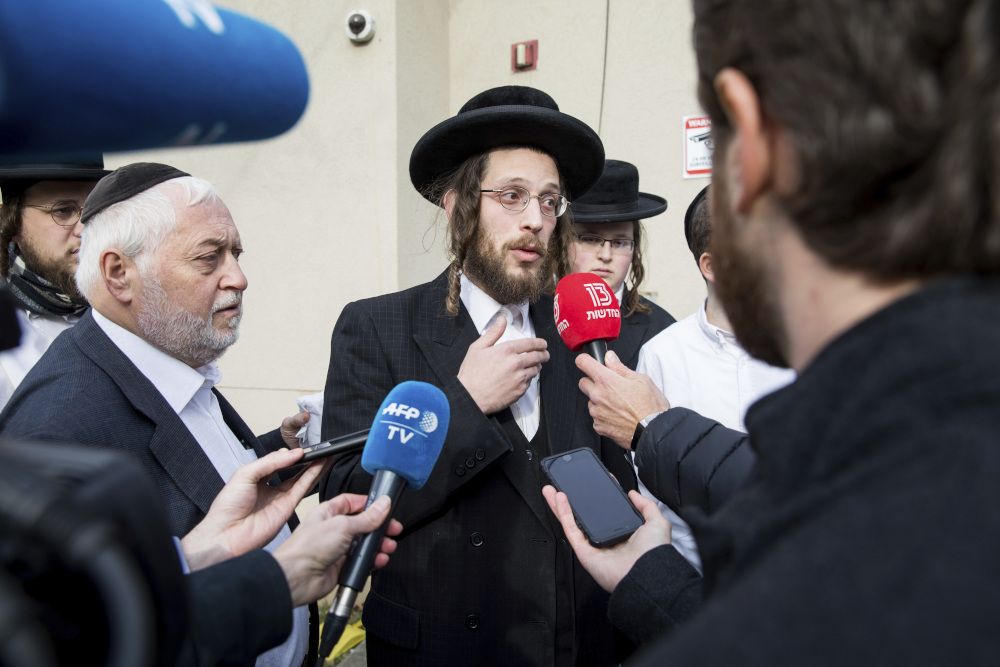 Josef Gluck talks to members of the media about how he obstructed the attacker Dec. 28 at a rabbi's home in Monsey, New York. (AP/Julius Constantine Motal)

Levy Kraus, 15, said he was near the rabbi's home when he saw a tall man enter with an object.

"He had something in his hand. It looked like an umbrella. It was covered," Kraus said.

Later, he said he saw the man rushing out of the house and scream at someone, "I'll get you."

Rabbi Motti Seligson, the media director of the Chabad Lubavitch movement, said witnesses told him that people fled the house and went to the synagogue where they locked themselves in. Rabbi Rottenberg led the service at the synagogue later, he said.

Weidel said a witness saw the suspect fleeing in a car and alerted police to the license plate number. Police entered that information into a database and used plate reader technology to track the vehicle to Manhattan, where Thomas was arrested.

"It was critical to the case," Weidel said.

Thomas played football for two seasons at William Paterson University in New Jersey. No one answered a telephone number listed for his address and the voicemail box was full.

Monsey, near the New Jersey state line about 35 miles (56 kilometers) north of New York City, is one of several Hudson Valley communities that has seen a rising population of Hasidic Jews in recent years.

At a celebration in Monsey on Dec. 29 that was planned before the shooting, several members of the community stood guard armed with assault-style rifles. They refused to give their names when approached by an AP journalist, but they said they were there to defend their community.

Six people — three people who had been inside the store, a police officer and the two killers — died in the gunbattle and standoff that New Jersey Attorney General Gurbir Grewal has said was "fueled" by hatred of Jews and law enforcement. 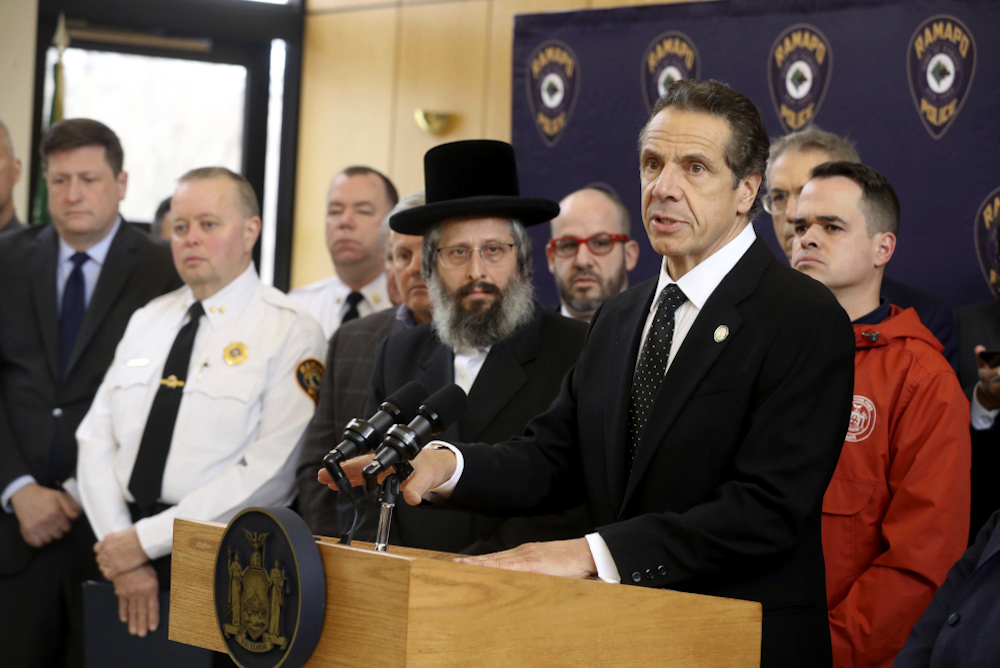 Last month, a man was stabbed while walking to a synagogue in the same town that was the site of the Dec. 28 attack; he required surgery. It's unclear whether the assailant has been arrested.

And this past week in New York City itself, police have received at least six reports — eight since Dec. 13 — of attacks possibly motivated by anti-Jewish bias. Mayor Bill de Blasio said Dec. 27 that police presence would increase in Brooklyn neighborhoods home to large Jewish populations.

Additional New York City police officers were being be sent to areas of Brooklyn with high Jewish populations, along with lighting towers and additional security cameras, de Blasio said.

The mayor also announced the formation of multi-ethnic, interfaith safety coalitions that would meet to strategize about disrupting potential hate crimes before they happen. He said some city schools in Brooklyn will also incorporate hate-crimes awareness into their curriculum.

"The Jewish community is utterly terrified," Evan Bernstein, the regional director of the Anti-Defamation League of New York and New Jersey, said in a statement. "No one should have to live like this. How many more times will it take for people in the Orthodox Jewish community to be terrorized with violence before something changes?"

[Sisak and Balsamo reported from New York. Ted Shaffrey in Monsey, Jessie Wardarski in Greenwood Lake, and Gary Fields and Ryan Kryska in New York contributed to this report.]