Former Cardinal Theodore McCarrick, who stepped down from active ministry this summer after credible allegations of sexual abuse of seminarians and children, has moved to a home for priests in Kansas to live out a "life of prayer and penance," as directed by the Vatican when he resigned from the College of Cardinals in July. 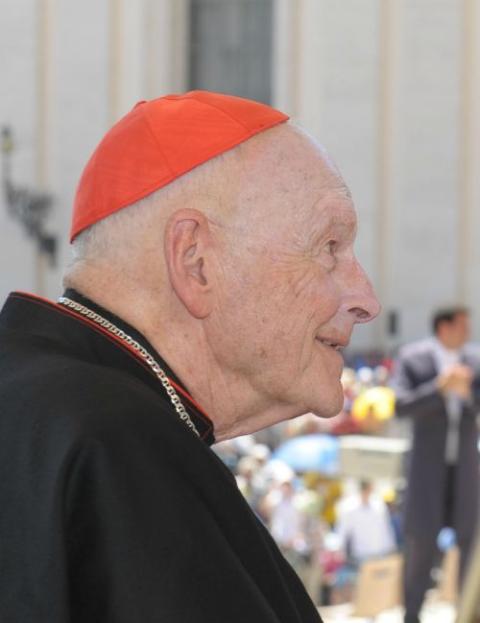 McCarrick, 88, now resides at St. Fidelis Friary in Victoria, Kansas, home to five Franciscan Capuchin priests and a brother. The house is located in the Diocese of Salina, Kansas, next to the Basilica of St. Fidelis, called the "Cathedral of the Plains" for its architectural significance. It attracts more than 16,000 tourists a year, according to the parish website.

The announcement on the Washington Archdiocese's website asks for "respect for the privacy of this arrangement" out of "consideration for the peace of the community at St. Fidelis Friary."

Permission for the arrangement was given by the order's provincial superior, Capuchin Fr. Christopher Popravak and Salina Bishop Gerald Vincke.

Vincke, who was appointed to lead Salina on June 13, defended his decision, which he admitted would be "offensive and hurtful to many people," by saying he believed in not only justice, but mercy.

"Please know that I agreed to this arrangement with the understanding that Archbishop McCarrick is excluded from any public appearances and ministry. Our diocese is not incurring any cost in this arrangement," Vincke wrote in a statement on the diocesan website titled "Why I Said 'Yes.'"

"In saying 'yes,' I had to reconcile my own feelings of disappointment, anger and even resentment toward Archbishop McCarrick," Vincke wrote. "I had to turn to Christ for guidance.… We know that Christ has compassion and mercy for all who repent of their sins. The cross is a place of love and mercy. It is not a place of retribution. If our actions do not have mercy, then how can it be of the Church?"

Vincke also apologized to victims, saying his "heart aches for you and your families."

"I am unable to comprehend the extent of your suffering," the bishop wrote. "Sadly, many times the victims did not receive an adequate response from the Church regarding the abuse they endured and the life-long pain and suffering that accompanies such evil. As a Church, we are extremely sorry and ask for forgiveness."

But at least one victims' advocate believes the move is a mistake.

"For the safety of kids, he should be at a secure, independently-run treatment center," said David Clohessy, former director of Survivors Network of those  Abused by Priests (SNAP) and currently its St. Louis volunteer director.

"Catholic officials have a miserable track record of trying to oversee proven, admitted and credibly accused abusive colleagues," Clohessy said in a statement.

Allowing alleged predators to live near their homes "is a recipe for disaster," he said, since families who still trust the abuser may expose their children to him.

"But friary staff aren't trained to deal with alleged molesters," he said.

Before his downfall, McCarrick was an influential advisor of popes and presidents, and frequently traveled the world for humanitarian causes. He was originally ordained for the New York Archdiocese and led two dioceses in New Jersey before being appointed archbishop of Washington by Pope John Paul II in 2000. He participated in the conclave that elected Pope Benedict XVI in 2005.

In June, McCarrick stepped down from active ministry after allegations of sexual abuse against a child were found credible and substantiated. Subsequent revelations included details about his sexual misconduct with at least two seminarians that resulted in financial settlements.

In July, he renounced his position in the College of Cardinals, the first U.S. cardinal to do so in the wake of sexual abuse allegations.