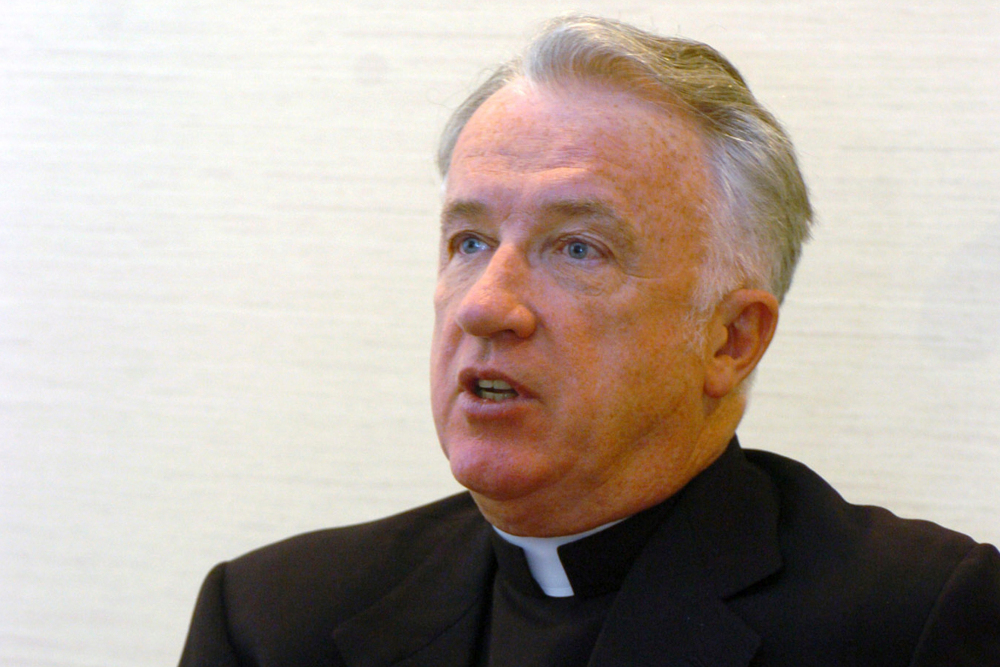 In this Feb. 21, 2005, file photo, incoming bishop of the Wheeling-Charleston diocese, W.Va, Michael Bransfield pauses in his new office, in Wheeling, W.Va. Bransfield, a former Roman Catholic bishop in West Virginia has issued a backhanded apology two years after resigning amid allegations of sexual and financial misconduct, and the diocese said Thursday, Aug. 20, 2020, that he has repaid $441,000. (AP File/Dale Sparks)

A former Roman Catholic bishop in West Virginia has issued an apology two years after resigning amid allegations of sexual and financial misconduct, and the diocese said Aug. 20 that he has repaid $441,000.

The Diocese of Wheeling-Charleston on Aug. 20 released a letter from former Bishop Michael Bransfield on its website.

"I am writing to apologize for any scandal or wonderment caused by words or actions attributed to me during my tenure," Bransfield wrote in the letter, dated Aug. 15.

Bransfield said he was reimbursed during his time as bishop for "certain expenditures that have been called into question as excessive." He said he has paid the money back to the diocese "even though I believed that such reimbursements to me were proper."

The $441,000 repayment is far less than the $792,638 sought by the church that was presented to Bransfield last November. Current Bishop Mark Brennan said the final repayment was approved by the Congregation for Bishops in Rome and that the money will be placed in a fund to pay for counseling victims of sexual abuse, added to money already set aside by the sale of Bransfield's former residence.

A church investigation in 2019 found Bransfield misused diocese funds for lavish spending on dining out, liquor, vacations, luxury items and church-funded personal gifts to fellow bishops and cardinals in the U.S. and the Vatican.

The investigation also found sexual misconduct allegations against Bransfield to be credible.

Brennan, who was named West Virginia's bishop in July 2019, has said the diocese incurred significant expenses arising from the investigation of Bransfield and "various legal issues" involving the diocese. An audit released in February listed spending on investigations and lawsuits at $1.5 million.

The diocese announced in August 2019 it had confidentially settled a lawsuit filed by a former personal altar server accusing Bransfield of molesting boys and men. The filing asserted Bransfield would consume at least half a bottle of liqueur nightly and had drunkenly assaulted or harassed seminarians.

And a lawsuit filed by West Virginia Attorney General Patrick Morrisey accused the diocese and Bransfield of knowingly employing pedophiles and failing to conduct adequate background checks on camp and school workers. A circuit judge dismissed the suit until the state Supreme Court decides whether it violates rules about the separation of church and state.

In his letter, Bransfield said that "there have been allegations that by certain words and actions I have caused certain priests and seminarians to feel sexually harassed. Although that was never my intent, if anything that I said or did caused others to feel that way, then I am profoundly sorry."

Bransfield concluded that he hoped the letter "will help to achieve a kind of reconciliation" with diocese followers. The apology was part of the plan presented to Bransfield at the request of Pope Francis last year.

In a separate statement detailing the approved plan, Brennan said the diocese is aware that some individuals also have received a letter from Bransfield. The statement did not indicate what that letter said.

The leader of a national group that supports victims of clergy sexual abuse said Thursday that Bransfield's letter was "written more as a defense than a true apology."

"A true apology from Bransfield would not contain any equivocation or whines about his intent being mis-perceived, but a simple and straightforward acceptance of his wrongdoing," said Zach Hiner, executive director of the St. Louis-based Survivors Network of those Abused by Priests, or SNAP.

Hiner said the sex allegations against Bransfield "are not things that can simply be waved away with an apology."

Brennan said Bransfield will received $2,250 in a monthly retirement stipend, far less than the $6,200 typically given to a retired bishop.

"This is in accord with the discretion that I have ... to reduce or eliminate additional benefits for a predecessor who did not retire in good standing," Brennan said.

Brennan said Bransfield also has complied with a request to buy the diocesan vehicle he has been using in retirement.