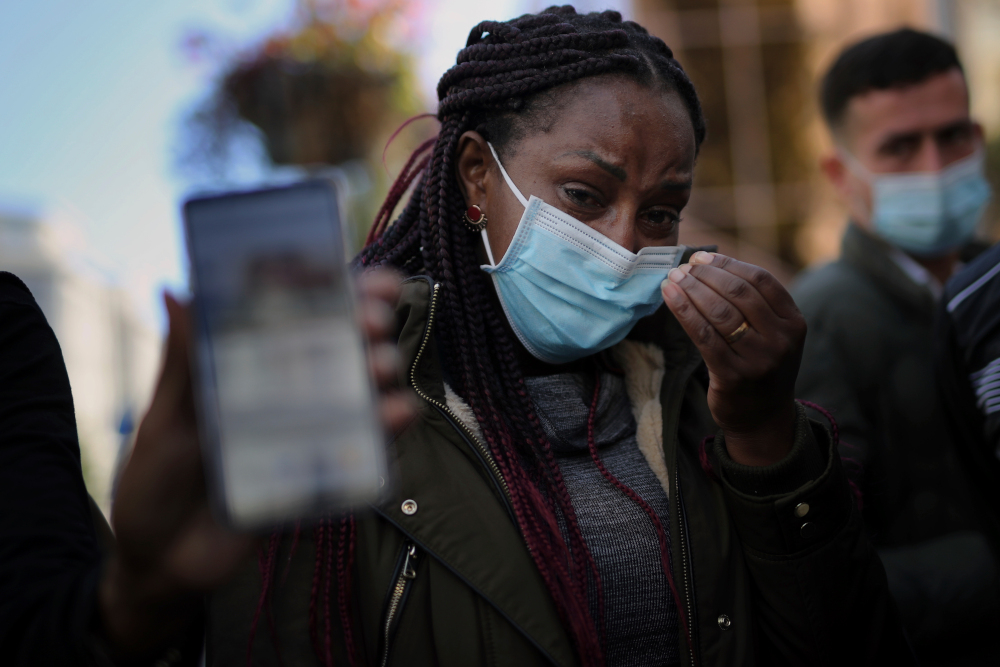 Sylva Debrito reacts in front of Notre Dame church after she received a news that a victim was a friend of her, in Nice, France, Friday, Oct. 30, 2020. A new suspect is in custody in the investigation into a gruesome attack by a Tunisian man who killed three people in a French church. France heightened its security alert amid religious and geopolitical tensions around cartoons mocking the Muslim prophet. (AP Photo/Daniel Cole)

Mourners lit candles and prayed silently Oct. 30 to honor three people killed in a knife attack at a church, as France heightened security at potential targets at home and abroad amid outrage over its defense of the right to publish cartoons mocking the prophet of Islam.

The attacker, who recently arrived in Europe from Tunisia, was hospitalized with life-threatening wounds, and investigators in France and his homeland are looking into his motives and connections, though authorities had previously said he acted alone. Tunisian antiterrorism authorities opened an investigation Friday into an online claim of responsibility by a person who said the attack on the Notre Dame Basilica in the Mediterranean city of Nice was staged by a previously unknown Tunisian extremist group.

From Pakistan to Russia and Lebanon, Muslims held more protests Oct. 30 to show their anger at caricatures of the Prophet Muhammad that were recently republished in a French newspaper as well as at French President Emmanuel Macron's staunch defense of that decision and strong stance against political Islam.

Macron's government stood firm, and called up thousands of reserve soldiers to protect France and reinforce security at French sites abroad. Interior Minister Gerald Darmanin said that the country is "at war" with Islamist extremists, and a conservative lawmaker for the Nice region called for a "French-style Guantanamo" to lock up terrorist suspects.

Many French Muslims denounced the killings, while warning against stigmatizing the country's peaceful Muslim majority. 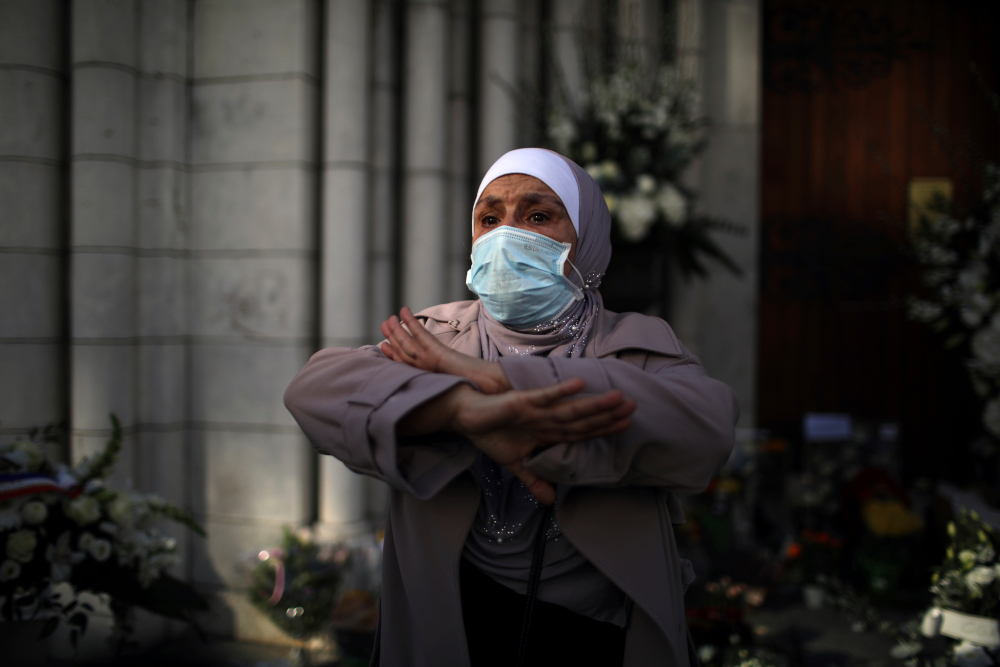 Mina Abdedaim reacts in front of Notre Dame in Nice, France, Friday, Oct. 30, 2020. A new suspect is in custody in the investigation into a gruesome attack by a Tunisian man who killed three people in a French church. France heightened its security alert amid religious and geopolitical tensions around cartoons mocking the Muslim prophet. (AP Photo/Daniel Cole)

While investigators sought to develop a picture of the attacker, identified as Ibrahim Issaoui, they detained a second suspect, a 47-year-old man believed to have been in contact with Issaoui the night before, according to a judicial official who spoke on condition of anonymity because he was not authorized to be named.

Issaoui's mother told Tunisian investigators that her son led a "normal life" for his age, drinking alcohol and dressing casually, and started praying two years ago but showed no suspicious activity, said Mohsen Dali, a spokesman at the Tunisian antiterrorism prosecutor's office.

He told The Associated Press that Issaoui was not flagged for radicalism and decided on Sept. 14 to emigrate illegally to Italy — after a failed first attempt — and reached Nice the day before the attack. Before Nice, Issaoui, who was born in 1999, arrived on the Italian island of Lampedusa on Sept. 20, France's antiterrorism prosecutor said.

Dali said an online post asserted the attack was staged by a group called Al Mehdi of Southern Tunisia, previously unknown to Tunisian authorities. French authorities are not commenting on the claim.

Issaoui's mother Qamra, who lives in the Tunisian province of Sfax, earlier told Saudi-owned Al-Arabiya TV with tears in her eyes that she was surprised to hear her son was in France when he called upon his arrival and had no idea what he was planning.

"You don't know the French language, you don't know anyone there, you're going to live alone there, why, why did you go there?" she recounted telling him.

His brother told Al-Arabiya that Issaoui had said he would sleep in front of the church, and sent a photograph showing him at the basilica in Nice. A neighbor said he knew the assailant when he was a mechanic and held various odd jobs, and had shown no signs of radicalization.

Tunisians fleeing a virus-battered economy make up the largest contingent of migrants landing in Italy this year. Italian media reported that when he arrived, Issaoui was placed with 800 others on a virus quarantine boat.

Italy's interior minister confirmed Friday that the suspect was ordered to leave on Oct. 9 but did not say if any action was taken to make sure he did.

Minister Luciana Lamorgese called Thursday's attack in France "an attack on Europe. Let's not forget that Lampedusa, Italy, is the gateway to Europe." 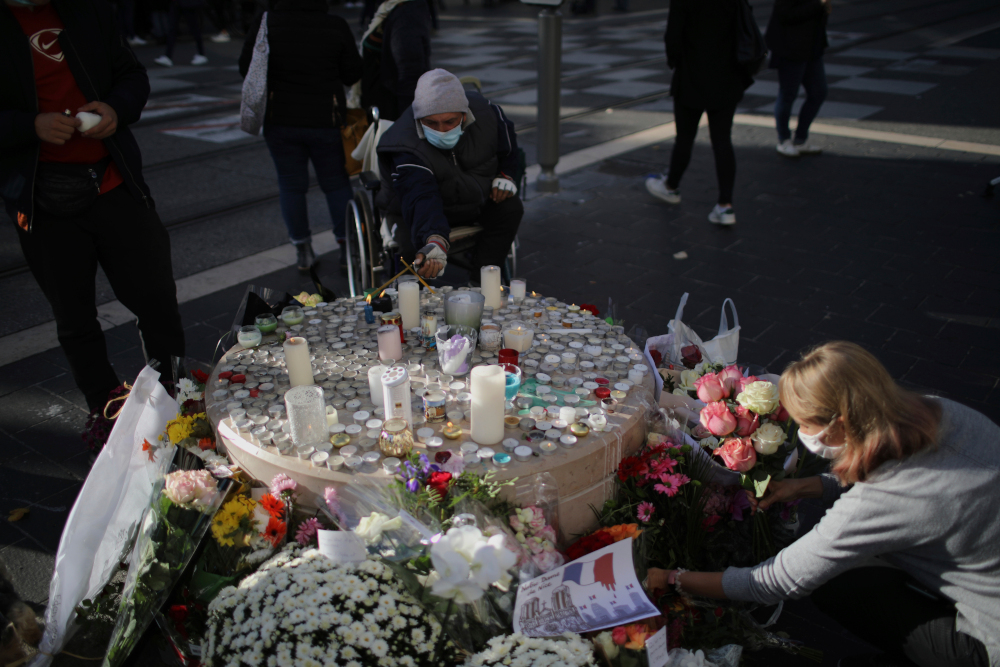 People set flowers, messages and candles in front of the Notre Dame church, in Nice, France, Friday, Oct. 30, 2020. A new suspect is in custody in the investigation into a gruesome attack by a Tunisian man who killed three people in a French church. France heightened its security alert amid religious and geopolitical tensions around cartoons mocking the Muslim prophet. (AP Photo/Daniel Cole)

As France entered a new virus lockdown Oct. 30, four soldiers with rifles periodically walked past the church in Nice, and mourners placed flowers, messages and candles at the entrance, crossing themselves and praying silently for the three victims.

They included 55-year-old church warden Vincent Loques, a father of two. Arahmi Ihou, owner of an internet café next door, mourned him as someone who was "nice to everyone — people (of) all nationalities."

"This is my church where I got married and had my children baptized and where I come and pray," said parishioner Eliane Bacchetta. "Yesterday, my daughter was here with her little one, and she was around when it happened — the 4 year-old is traumatized."

Another victim was Brazilian-born Simone Barreto Silva, a 44-year-old mother of three who moved to France to join a dance group led by her sister and worked in elder care, according to Brazilian media portal G1. Silva was playful and dreamed of traveling around the world in a food truck, her friend Ivana Gomes Amorim told G1.

"She was also a fighter, and she died like a warrior. Despite being hurt, she ran and was able to sound the alarm, preventing a bigger tragedy," Anderson Argolo, who knew Silva's family, told the Folha de S. Paulo newspaper.

The attack was the third in less than two months that French authorities have attributed to Muslim extremists, including the beheading of a teacher who had shown caricatures of the Prophet Muhammad during a civics lesson after the images were republished by satirical newspaper Charlie Hebdo.

The images deeply offended many Muslims, and protesters burned on French flags, stomped on portraits of Macron or called for boycotts  of French products at demonstrations Friday in several countries.

Government ministers said Friday that 3,500 reserve soldiers will join thousands of others protecting schools and religious sites. Schools remain open during a nationwide lockdown that started Friday to stem the spread of the virus, but religious services are canceled — except this Sunday for All Saint's Day.

Nice imam Otmane Aissaoui decried a "terrible act of terror, of savagery, of human insanity that plunges us into sadness, shock and pain" — and once again puts French Muslims in the spotlight.

The attacker "hit brothers and sisters who were praying to their lord," he told The Associated Press. "It's as if a mosque was touched. ... I am deeply Christian today."