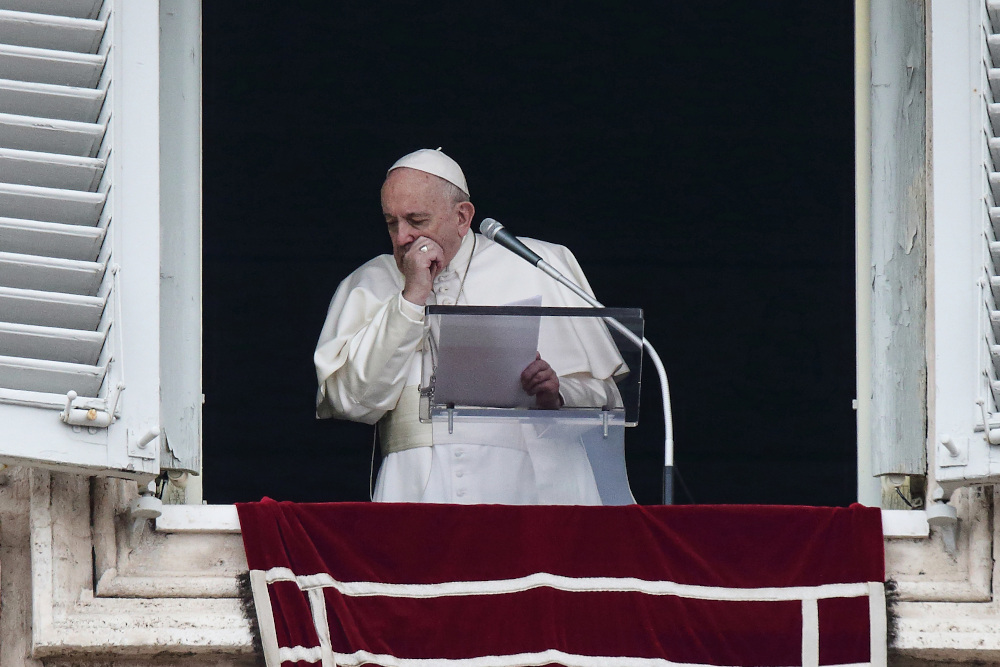 Pope Francis coughs as he leads the Angelus from the window of his studio overlooking St. Peter's Square at the Vatican March 1, 2020. (CNS/Reuters)

Continuing his recovery from a mild cold, Pope Francis said that he would be unable to attend his annual Lenten retreat with Roman Curia officials.

"Unfortunately, my cold forces me to not participate," the pope told pilgrims in St. Peter's Square March 1 for his Sunday Angelus address.

"This year, I will follow the meditations from here. I spiritually join the curia and all the people who are living this moment of prayer, doing spiritual exercises at home," he said.

According to a March 2 report by Vatican News, the pope sent a message to members of the Roman Curia attending the retreat at the Pauline Fathers' retreat and conference center in Ariccia, a town about 20 miles southeast of Rome.

The message was read by Jesuit Father Pietro Bovati, secretary of the Pontifical Biblical Commission, who was leading the Lenten meditations on: "The encounter between God and man, in the light of Exodus, the Gospel of Matthew and the prayer of the psalms."

"I accompany you from here. I will do the exercises in my room, following the preaching of Fr. Bovati whom I thank very much. I will pray for you; please, do the same for me," the pope said.

This is the first time in his papacy that Francis has missed the annual Lenten retreat.

The tradition of having weeklong, preached "spiritual exercises" for the pope and members of the papal household began with Pope Pius XI in 1925. For more than 35 years, it was an Advent, not a Lenten retreat.

Pope John XXIII broke the Advent tradition in 1962 when he spent a week in September on retreat to prepare for the Second Vatican Council. His successor, Pope Paul VI, made the retreats a Lenten staple in 1964.

Francis has had a reduced schedule since the Vatican announced Feb. 27 that he would be unable to attend a traditional penitential service with priests of the Diocese of Rome due to "a slight indisposition."

While the pope has continued celebrating his daily morning Mass at the Domus Sanctae Marthae and holding one-on-one meetings, he canceled audiences with several groups.

The pope did not attend audiences with "members of International Group of Bioethics, and participants of the general chapter of the Legionaries of Christ and the general assembly of consecrated and lay members of Regnum Christi," the Vatican said Feb. 29.