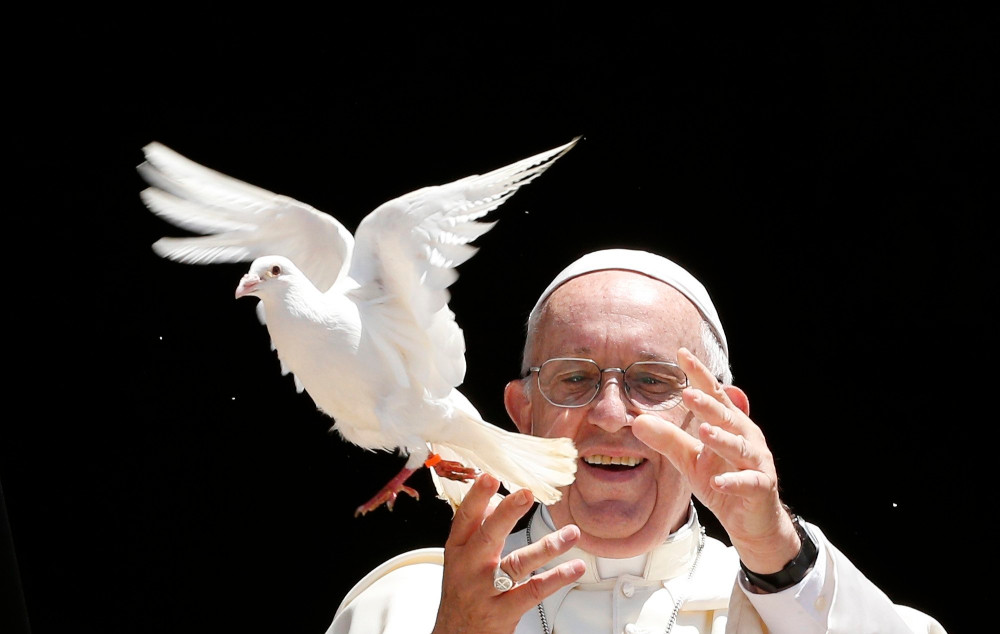 Pope Francis releases a dove as a sign of peace outside the Basilica of St. Nicholas after meeting with the leaders of Christian churches in Bari, Italy, July 7, 2018. Francis has written another chapter in his teaching against all war and against the manufacturing and sale of weapons. (CNS/Paul Haring)

Modern popes have been clear voices for peace, but Pope Francis is moving closer to a broad embrace of nonviolence and a declaration that modern warfare is so deadly and sophisticated that the traditional "just war" theories cannot apply.

And, in a new book, he has urged each and every person to recognize that there is, in fact, something they can do to promote peace.

"Indifference is an accomplice of war," Francis wrote.

The Vatican publishing house June 28 released Peace on Earth: Fraternity is Possible, a collection of Pope Francis' words and speeches on the importance of praying and working for peace.

The volume closes with a chapter he wrote specifically for the book, highlighting the role each person can play in promoting peace, but also moving closer to adopting a stance of total nonviolence.

Already in Fratelli Tutti, on Fraternity and Social Friendship, he questioned whether in modern warfare any conflict could be judged a "just war" because proportionality and the protection of civilians seem to be difficult if not impossible to guarantee.

"We can no longer think of war as a solution because its risks will probably always be greater than its supposed benefits," one of the main criteria of just-war theory, he wrote in the document. "In view of this, it is very difficult nowadays to invoke the rational criteria elaborated in earlier centuries to speak of the possibility of a 'just war.' Never again war!"

In the new book, Francis said nations and groups too easily turn to war, using "any kind of excuse," including claiming they are attacking another as a humanitarian, defensive or preventative measure, "even resorting to the manipulation of information" to support their argument.

On the issue of nonviolence, Francis noted that when Jesus was about to be arrested, he did not claim a right to self-defense and even told the disciple who drew a sword to defend him, "Put your sword back into its sheath."

"The words of Jesus resound clearly today, too," he wrote. "Life and goodness cannot be defended with the 'sword.'"

In the Gospel of Luke's version of the story, Jesus tells his disciples, "Stop, no more of this!" 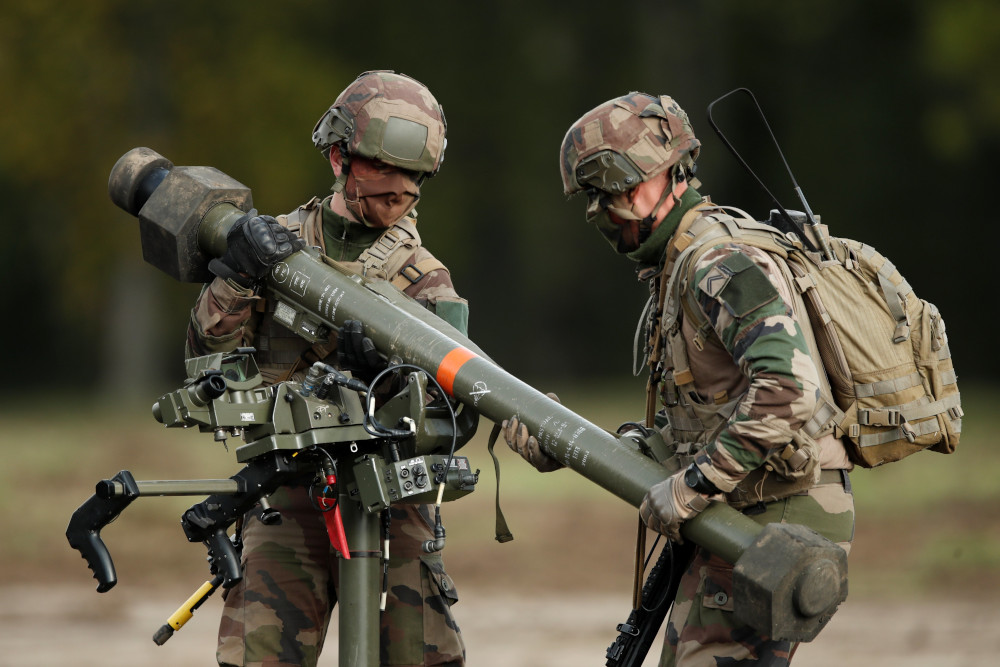 French soldiers carry a very short-range air defense weapon system Mistral during a live mobility demonstration to present France's military capabilities in Versailles Oct. 8, 2020. Pope Francis has written another chapter in his teaching against all war and against the manufacturing and sale of weapons. (CNS/Reuters/Benoit Tessier)

"Jesus' sorrowful and strong, 'No more,' goes beyond the centuries and reaches us. It is a commandment we cannot avoid," Francis wrote. "'No more' swords, weapons, violence, war. In that 'No more' there is an echo of the ancient commandment, 'Thou shall not kill.'"

"Listening to the passionate plea of the Lord means to stop selling weapons and considering only one's own economic interests," the pope said. "There are no justifications for this, even if jobs will be lost with the end of arms sales."

Another major obstacle on the road to peace, he wrote, is living "with wars as if they were inevitable."

Especially in countries that are not at war, people's awareness of armed conflict and its brutality can grow dim, he said. The only time they seem to notice is with the arrival of refugees, who he called "witnesses of war, painful 'ambassadors' of the unheard demand for peace."

Limiting the suffering caused by war, he wrote, means welcoming refugees and listening to their pain-filled stories.

Francis recalled how, when India was facing widespread famine in 1966, St. Paul VI said, "No one today can say, 'I didn't know.'"

And while most people are not government leaders or diplomats with the power to stop a war, neither can they just act as if they did not know something horrible was going on, he said. They must exert pressure on their governments to intervene, to stop arms sales and "demand a policy of peace."

On a smaller, but more concrete level, Francis said, "conflicts are prevented with the daily search for fraternity," which everyone can and should be involved in forging.

Such kinship is not simply a feeling, he wrote, but a practice, one that works to make sure that everyone in a community, city, region, nation and continent feels welcomed, valued and involved in building society.

"Peace starts with not hating, not excluding, not discriminating against, not leaving anyone on their own," he said.

But prayer also is essential, he wrote. "To pray is to protest war in front of God. Never stop asking the Lord with faith and insistence for the end of conflict. Our prayer gives voice to the lament of the people" impacted by every war.

"We cannot accept resignation to wars being a daily companion of humanity," he said. "We cannot accept that so many children grow up under the shadow of conflict. We must say 'No more' to war."