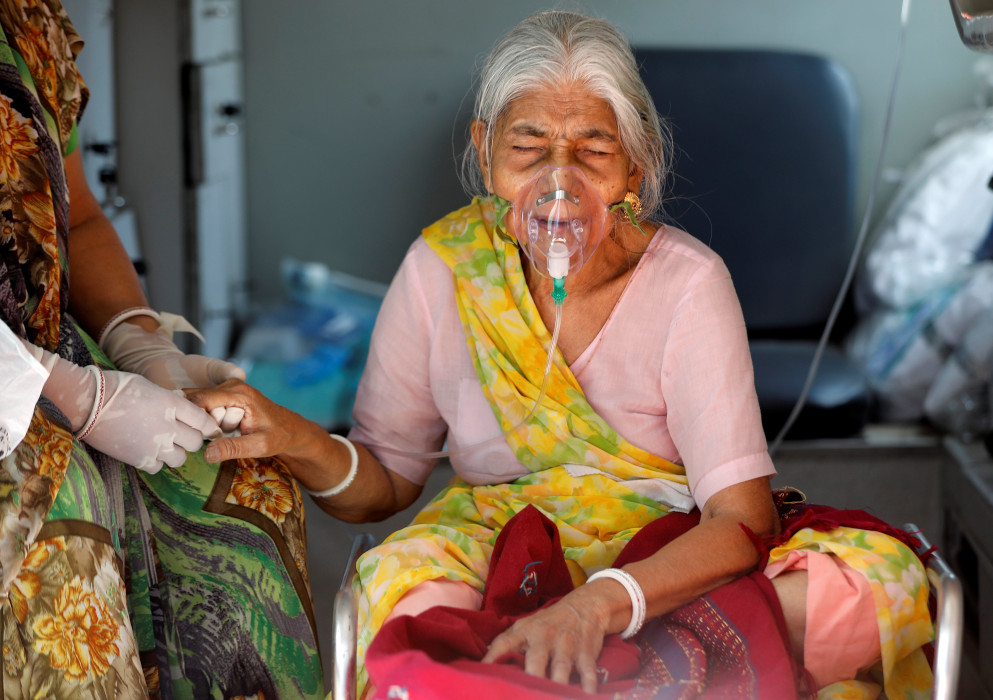 Lilaben Gautambhai Modi, 80, wearing an oxygen mask, sits inside an ambulance as she waits to enter a COVID-19 hospital for treatment, amid the spread of the disease in Ahmedabad, India, May 5, 2021. As India faces a massive surge in new infections and deaths caused by COVID-19, Pope Francis said he was praying for all those affected by the huge health emergency. (CNS/Reuters/Amit Dave)

As India faces a massive surge in new infections and deaths caused by COVID-19, Pope Francis said he was praying for all those affected by the huge health emergency.

With so many in India suffering, "I am writing to convey my heartfelt solidarity and spiritual closeness to all the Indian people, together with the assurance of my prayers that God will grant healing and consolation to everyone affected by this grave pandemic," he wrote.

Smashing global records, on May 5 more than 412,000 new cases and 3,980 deaths were registered in India in just 24 hours; however, health experts estimate the actual numbers are much higher due to unrecorded deaths and infections. The World Health Organization said India has accounted for 46% of global cases and 25% of global deaths reported in the past week.

In a written message sent May 6 to Cardinal Oswald Gracias of Mumbai, president of the Catholic Bishops' Conference of India, the pope said he was praying for all those who have become sick, for their families and caregivers and for those mourning the loss of loved ones.

"I think too of the many doctors, nurses, hospital workers, ambulance drivers and those working tirelessly to respond to the immediate needs of their brothers and sisters," the pope wrote. "With deep appreciation I invoke upon all of them God's gifts of perseverance, strength and peace."

The pope also expressed his closeness to the nation's Catholic communities and thanked them for their "charity and fraternal solidarity carried out in the service of all; I think especially of the generosity shown by so many committed young people."

He prayed for the faithful who have lost their lives, including "the great numbers of priests and men and women religious," and asked that "in these days of immense grief, may we all be consoled in the hope born of Easter and our unshakable faith in Christ's promise of resurrection and new life."

Meanwhile, UNICEF has warned that the deadly surge in COVID-19 cases in India "is larger and spreading more rapidly than the first," putting an enormous strain on health and critical care facilities.

"Urgent action is needed to avert further tragic loss of life," it said on its website, appealing for funding to deliver urgently needed testing equipment, supplies and oxygen products and other services.

Essential health services, such as routine inoculations, have been disrupted and even risk being shut down with healthcare staff, equipment and facilities being diverted to addressing the ballooning pandemic, he said in a statement May 4.

Increasing numbers of children are being hurt by the pandemic as they lose parents and caregivers, witness traumatic scenes and lose vital health care, nutritional, education and support services, he said.

The current second wave throughout South Asia has the potential to cause immense devastation, Laryea-Adjei warned saying immediate assistance from the international community was "a moral imperative."