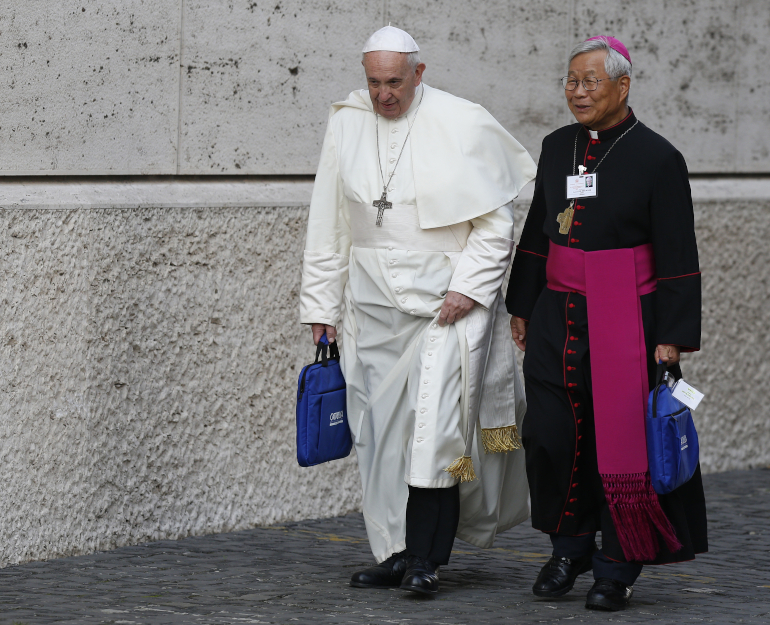 Pope Francis and South Korean Bishop Lazarus You Heung-sik arrive for a session of the Synod of Bishops on young people, the faith and vocational discernment at the Vatican on Oct. 16, 2018. (CNS photo/Paul Haring)

Pope Francis on June 11 named a South Korean bishop who has spent four decades in ministry in that country as the new head of the Vatican office charged with overseeing Catholic priests and deacons around the world.

Bishop Lazarus You Heung-sik, in ministry for the Daejeon Diocese since 1979 and its leader since 2005, will replace Italian Cardinal Beniamino Stella, who had served in the Vatican role since 2013 and is turning 80 in August.

You, aged 69, earned a doctorate in dogmatic theology from Rome's Pontifical Lateran University in 1983 but has since spent his ecclesiastical career in Daejeon, according to a biography on the diocese's website.

He served as an assistant priest at the diocesan cathedral, as director of a retreat house and an education center, and as the president of the Catholic university before first becoming a coadjutor bishop in 2003. Since becoming a bishop, he has served terms as the president of Caritas Korea and as the head of the Korean bishops' committees for migrants and for youth ministry.

The Vatican's Congregation for Clergy is responsible for most matters pertaining to Catholic priests and deacons globally who are not part of religious orders.

The Vatican's June 11 release said Stella would remain in his post as You prepares to come to Rome.

Earlier in June, Francis had asked an Italian bishop to conduct an official "visitation," or investigation, of the Vatican's clergy office, which appears oriented to helping review the dicastery's mission as it receives new leadership.

The Congregation for Clergy is the second Vatican office where Francis has appointed a new prefect in under a month. On May 27, the pope named British Archbishop Arthur Roche to replace Cardinal Robert Sarah at the Congregation for Divine Worship and the Discipline of the Sacraments.

At least one more Vatican office is expected to receive new leadership in coming months. Canadian Cardinal Marc Ouellet, who has led the Congregation of Bishops since 2010, concluded a second five-year term in that role in June 2020.