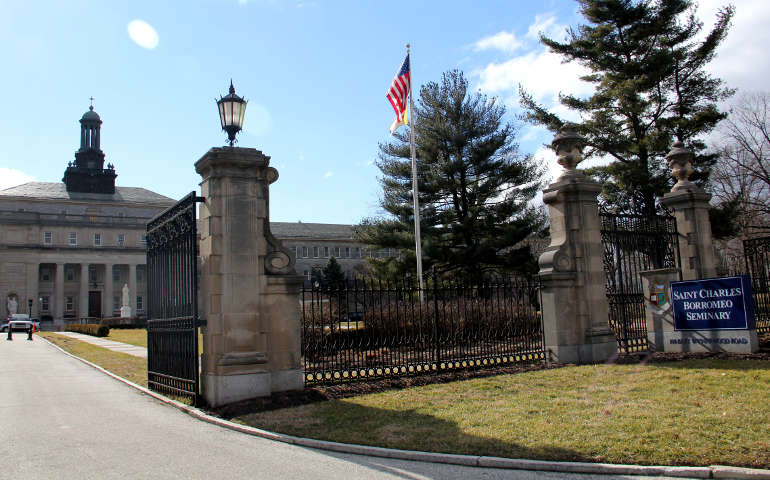 Despite dismal facts about the decline of the family and cultural trends that show more and more youth delaying marriage or avoiding and disposing of meaningful relationships, Pope Francis remains optimistic about families and offers a blunt, counter-message of hope.

“The family is not first and foremost a cause for concern. But rather,” he said, “the joyous confirmation of God’s blessing upon the masterpiece of creation.”

These words came in an address to about 300 bishops from around the world who are in Philadelphia for the Vatican-sponsored World Meeting of Families.

As an alternative to blaming current culture or nostalgically yearning for a return to yesteryear, Francis challenged the bishops to become true pastors who as shepherds stand “in the midst of” their flocks, and accompany them while seeking out those who are in the midst of real-world struggles.

Before beginning his reflection on a pastoral approach to families, Francis informed the bishops that he had met earlier that morning with survivors of sexual abuse.

Francis delivered his optimistic forecast for the family and call to authentic pastorship on his final day in the U.S. The feeling of a pastor talking with pastors was reinforced by the setting, St. Martin’s Chapel at St. Charles Borromeo Seminary, the training school for priests in the Philadelphia archdiocese. The pastoral marching orders came the morning after he spoke to a crowd of 50,000 gathered along Benjamin Franklin Parkway for the Festival of Families.

Instead of despair for current conditions, the church “can rejoice in the Lord’s gift” of so many faithful families amid the difficult trials life has presented, he said.

“I would say that the foremost pastoral challenge of our changing times is to move decisively towards recognizing this gift,” Francis said. “For all the obstacles we see before us, gratitude and appreciation should prevail over concerns and complaints.”

Still, Francis recognized the new realities of the current social context, saying the church is not “immune” from them.

“This concrete world, with all its many problems and possibilities, is where we must live, believe and proclaim,” he said.

Where before similarities between civil marriage and the sacrament of marriage were numerous, “this is no longer the case,” Francis said. He offered an analogy comparing a time of neighborhood stores -- where choices may have been fewer but business developed on the basis of trust and personal bonds -- to an era of supermarkets offering greater selection but at the expense of those close relationships.

“Today’s culture seems to encourage people not to bond with anything or anyone, not to trust. The most important thing nowadays seems to be follow the latest trend or activity,” he said.

The pope diagnosed at the heart of the loss of trust a consumerist mindset that discards what’s no longer useful – “Consuming relationships, consuming friendships, consuming religions, consuming, consuming … Whatever the cost or consequences.” -- in addition to the trend of chasing fads and “accumulating ‘friends’ on one of the social networks,” all of which he said leads to a “radical sense of loneliness.”

“Loneliness with fear of commitment in a limitless effort to feel recognized,” Francis said.

It is easy to see present culture as selfishness and indifferent toward marriage and families, he said, but “We must not fall into this trap.” Again diagnosing, he pointed toward a culture of discouragement in which young people “have yielded to a form of unconscious acquiescence,” a paralysis toward challenges before them, and delay marriage “waiting for ideal conditions.” He relayed stories he heard from mothers in Buenos Aires who wondered when their sons, in their 30s, would finally leave the home to start his own family.

“We need to encourage young people to run this risk,” Francis said, urging the bishops to re-engage rather than retreat; to pastor, as opposed to passing blame and condemnation.

“Should they hear their pastors saying that ‘it was all better back then,’ ‘the world is falling apart and if things go on this way, who knows where we will end up?’ No, I do not think that this is the way,” Francis said.

In an era of more supermarkets than local markets, the world demands a pastoral conversion of its shepherds, the pope said, “to look at things realistically” and “to seek out, to accompany, to lift up, to bind up the wounds of our time.”

“As pastors, we bishops are called to collect our energies and to rebuild enthusiasm for making families correspond ever more fully to the blessing of God which they are! We need to invest our energies not so much in rehearsing the problems of the world around us and the merits of Christianity, but in extending a sincere invitation to young people to be brave and to opt for marriage and the family,” Francis said.

“Here too,” he said, “we need a bit of holy parrhesia,” a Greek word meaning “to speak boldly,” which Francis has been using freqently.

The alternative – “A Christianity which ‘does’ little in practice, while incessantly ‘explaining’ its teachings” -- would be “dangerously unbalanced. I would even say that it is stuck in a vicious circle.”

“A pastor must show that the ‘Gospel of the family’ is truly ‘good news’ in a world where self-concern seems to reign supreme,” Francis said.

He proceeded to outline several traits of the pastors he sought:

“We might well ask whether in our pastoral ministry we are ready to ‘waste’ time with families. Whether we are ready to be present to them, sharing their difficulties and joys,” he said.

Without deepening the covenant between church and family, the church “becomes arid, and the human family will grow irremediably distant, by our own fault, from God’s joyful good news.

“If we prove capable of the demanding task of reflecting God’s love, cultivating infinite patience and serenity as we strive to sow its seeds in the frequently crooked furrows in which we are called to plant, then even a Samaritan woman with five ‘non-husbands’ will discover that she is capable of giving witness,” he said.

Following the meeting at the seminary, Francis was set to visit with inmates at an area prison before returning in the afternoon to the Benjamin Franklin Parkway where he and another expected crowd of up to 1 million will conclude the World Meeting of Families with Mass and his last public event in the United States.

Francis is to fly back to Rome tonight.