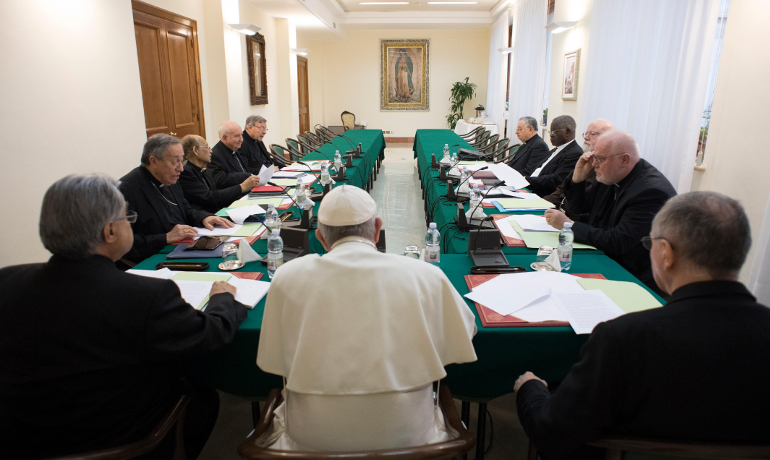 Pope Francis leads the 18th meeting of his Council of Cardinals at the Vatican in February 2017. (CNS photo/L'Osservatore Romano, handout)

Pope Francis has reorganized the group of cardinals advising him on how to reform the Vatican bureaucracy, removing two prelates under scrutiny for allegations of sexual abuse or cover-up and a third who has retired.

Both Australian George Pell, who is on a leave of absence from Vatican service to fight allegations of historic sexual misconduct in his native country, and Chilean Francisco Errázuriz Ossa, accused of covering up for abusive priests as an archbishop, will no longer be part of the Council of Cardinals.

Also leaving is Congolese Laurent Monsengwo, who is 79 years of age and retired as archbishop of Kinshasa in November.

Vatican spokesman Greg Burke announced the moves in a Dec. 12 briefing, saying Francis had written to the three prelates individually in October, "thanking them for the work they have done over these past five years."

The three removals leave the Council of Cardinals with six members. Burke said the naming of replacement members "is not foreseen at this moment."

While changes to the membership of the council had been rumored for months, it was unclear which members Francis would be asking to leave the group.

Pell took a leave from his role as the head of the Vatican's Secretariat for the Economy in June 2017, after Australian police announced they would be pursuing charges against him for historic sexual abuse of minors.

Asked about the status of Pell's Vatican job at the briefing, Burke responded: "The Holy See has the utmost respect for Australian judicial authorities. We are aware that there is a suppression order in place by the court and we respect that order."

Pell has strenuously denied the allegations made against him. Most of the specifics of the accusations are unknown, as Australian law strictly limits reporting on proceedings involving allegations of sexual abuse.

Errázuriz led the Catholic Church in the Chilean capital of Santiago from 1998-2010. He has been accused by Chilean abuse survivors of perpetrating a cover-up to protect abusive priests while he was archbishop.

Survivors cite in particular their efforts to report former priest Fernando Karadima, a notorious abuser who the Vatican would later sentence to a life of prayer and penance in 2011.

Juan Carlos Cruz, one of three Karadima victims who met with Francis in May, told NCR he was "glad" to hear that Errázuriz had been removed from the Council of Cardinals.

"He should have never been there in the first place," said Cruz. "He has misinformed the pope, lied, [and] covered up heinous crimes."

"The pope needs good advisors by his side, not people who are in trouble with the law because of their crimes," he said.

Errázuriz has said that he erred in not acting against Karadima more quickly. After several of Karadima's victims went public in 2010, he said it was a mistake to not see accusations he had received years earlier against the priest as credible.

Francis created the Council of Cardinals shortly after his election as pontiff in 2013, tasking the group with helping him reform the Vatican bureaucracy, commonly known as the Roman Curia.

The council has had 27 in-person meetings in Rome, with the last being held this week. They are finalizing work on a document to outline a new structure for the Curia, which will replace Pope John Paul II's 1988 apostolic constitution Pastor Bonus.

The new document currently has the working title Praedicate Evangelium ("Proclaim the Gospel").

The only American among the remaining six members of the council is Boston Cardinal Sean O'Malley.

Church historian Massimo Faggioli noted in a brief interview that Francis has not clearly outlined the canonical status of the council or the terms of its members.

"The Council of Cardinals could and should be the transition towards a new instrument in the hands of the papacy for a synodal Church," said Faggioli, a professor of historical theology at Villanova University. "The cases of Pell and Errázuriz remind us that synodality still requires some role of authority that in case of scandal or corruption can remove church officials."

Spokesman Burke said that among the issues discussed at the council's meeting this week was the question of reducing the Vatican's operating costs.

Burke noted that the greater part of the city-state's budget is dedicated to personnel. He said "there is no plan or intention" for lay-offs, but that there may be offers of early retirement for some staff.

The next meeting of the council is set for Feb. 18-20, in order to align with the Feb. 21-24 summit Francis has called for presidents of the world's various conferences of Catholic bishops to discuss preventing clergy sexual abuse.

This breaking news story is being updated.